Actor-Politicians Are A Fading Lot In Tamil Nadu

Kamalahaasan sails singly into the Lok Sabha scrum. Other actor-politicians in the state aren’t that relevant in 2019. 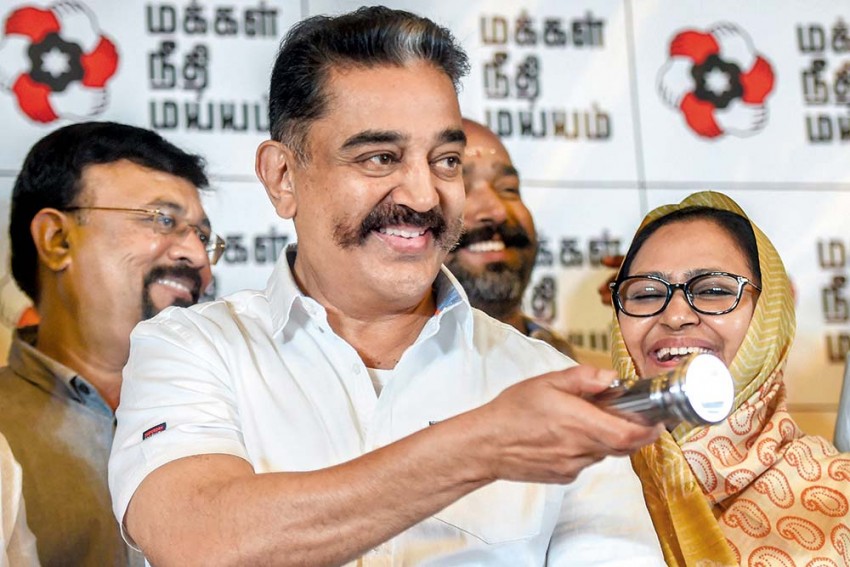 Kamalahaasan with MNM’s symbol while releasing the list of candidates
Photograph by PTI
G.C. Shekhar March 27, 2019 00:00 IST Actor-Politicians Are A Fading Lot In Tamil Nadu 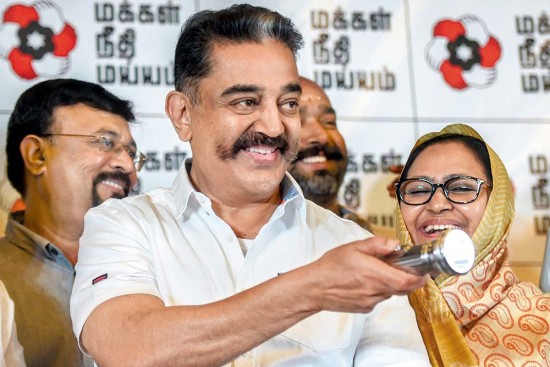 You can take away the politician from the actor but never the actor from the politician. Kamalahaasan, the latest entr­ant to the galaxy of actor-­tur­ned-politicians from Tamil Nadu, proved the maxim on March 24. At a public meeting in Coimba­tore where he released his party’s manifesto and its list of candidates for the Lok Sabha polls, the stage was T-shaped—the vertical part being a long ramp on to which the leader made his appearance.

As he walked the ramp, waving away at the large crowd, Kamal the star inhabited that cinematic moment with practised ease. The politician in him played out two hours later as he used the large screen on the backcloth to tear into the ‘shortcomings’ of the BJP and AIADMK governments, terming even the DMK and the Congress as “products of unh­oly alliances”.

A year after he launched Makkal Needhi Maiam (MNM) and got the election symbol of ‘torch light’ allotted to it, Kamalahaasan has made a bold sally—taking on the two Dravidian majors and their alliances almost all alone. With only a small Dalit party and a farmer’s outfit for electoral company (in Andaman & Nicobar Islands, the MNM would support the Trinamool candidate), he has fielded candidates in all 39 Lok Sabha seats of the state and in the 18 assembly bypoll seats as well. In his election manifesto, Kamal has announced 50 per cent reservation for women in jobs, equal pay and large share of profit for farmers. Juxtaposed with Tamil Nadu’s biggest movie idol Rajnikant’s political modesty (After stating his intent to enter politics, Rajni is yet to announce his party’s name), Kamalahaasan’s chutzpah stands out. When you take this with his decision not to contest the Lok Sabha polls himself, the venture seems to be straining credulity.

Other actor-politicians in the state aren’t that relevant in 2019. Illness has robbed Vijayakant, who was seen as an alternative to the two DMKs, of the mac­hismo that anchored both his films and politics. The commercial manner in which he, his wife and his brother-in-law conducted electoral deals has red­uced his DMDK to a bit player, its vote-share falling from a high of 11 per cent in 2009 to just about four per cent now. Playing both the DMK and AIADMK didn’t bode well for his party’s image; the proud ‘Captain’ has had to settle for just four seats.

The likes of Sharath Kumar, who started a party (AISMK) just to harvest the votes of his Nadar community, T. Rajendar (AILDMK), who fell out with M.K. Stalin and actor Karthik (MUKK), who eyes the Thevar community, have all fallen by the wayside. Actress Khushbu has fitted into the role of a campaigner and spokesperson for the Congress. Indeed, for an actress to be a successful politician means attempting to emulate Jayalalitha—a nearly impossible task.

Whether Kamalahaasan, a three-time national award winner, could emulate the political successes of Karunanidhi, MGR and Jayalalithaa—as film personalities, they are in the same league—will be tested. His decision not to contest as a candidate has raised doubts about his strategy.

“Kamal could simply have said that his party is just a year old and he would rather wait for the 2021 assembly elections. Instead, he has boldly taken the plunge. Since he is the face of the party, he has chosen to devote his time to campaign for every candidate rather than be tied down to a constituency. He would definitely contest the 2021 ass­embly elections, when he will be our chief ministerial face,” explains former IAS officer K.H. Rangarajan, who is MNM’s South Chennai candidate.

But Congress leader Peter Alphonse asserts that actor-politicians do not have the same staying power of a politician. “We will be around even after blistering election defeats. Our capacity to absorb shocks and setbacks will see us soldiering on. But these stars are so used to box off­ice hits that they would lose interest if their charisma fails to convert into votes after two elections. MGR and Jayalalitha belonged to the previous generation of filmstar-politicians and they had a common rival in Karunanidhi that kept them focused on politics,” he says. 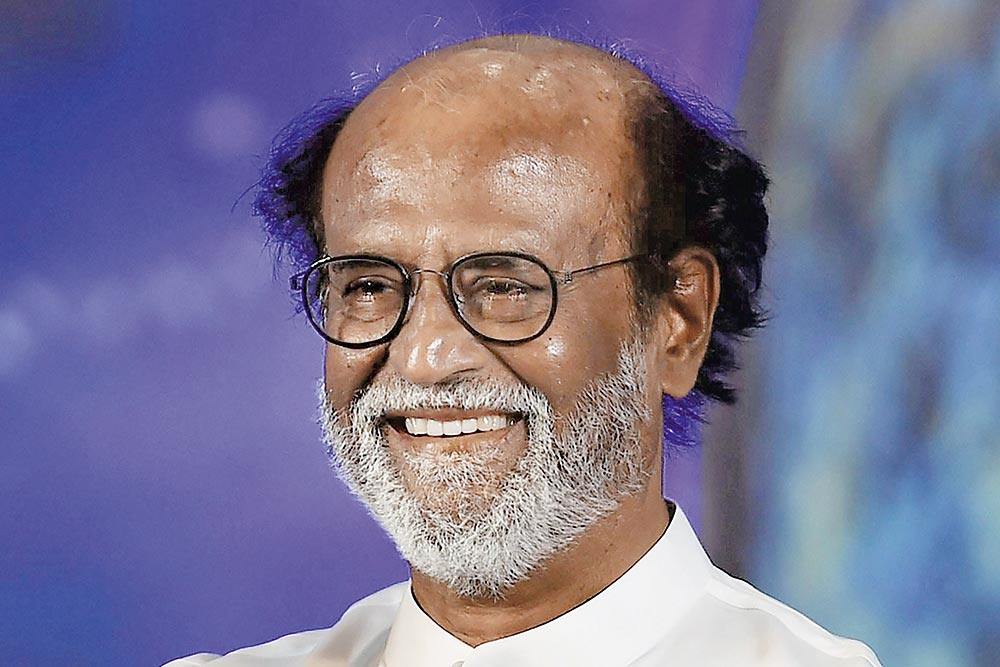 Rajnikant has proven to be a political non-starter. As years go by, his appeal resembles a post-dated cheque.

By that theory, if and when Rajnikant launches his party and contests the 2021 election as promised, it could be a one-shot affair. Also, at 68, age is not on his side and he’s rumoured to have health issues. His political future and appeal—a matter of speculation in Tamil Nadu for years now—has started to resemble a post-dated cheque, to be encashed in 2021.

Agrees R. Kannan, biographer of MGR. “More than Kamalahaasan’s electoral foray, it is Rajnikant’s serious plunge that would det­ermine if the run of the actor-politician would con­­­­tinue. Film actors enjoy an edge over full-time politicians due to their familiarity with the masses. But they can succeed only if they capitalise on their popularity at the right time. MGR was unique as he was a hero even during his political days, while Jaya­lalitha inherited his legacy. So it will not be easy for these new entrants.”

The serious political players also view the actors as a threat, even as they dismiss them as inconsequential. Stalin shrugged off Kamal’s political entry as a passing fad, but Kamal retorted by pointing out that an actor—MGR—had kept the DMK out of power for a decade and hence the DMK’s nervousness in his joining the fray was understandable. He was not off the mark—the DMK had earlier nipped in the bud the political interest shown by actor Vijay.

It’s not that the DMK itself is immune to the glamourous pull filmstars exert on politics. It has always been quick to use the star appeal of actors and actresses to bolster its campaigns, but has skilfully kept their ambitions in check. Khushbu was accorded a warm welcome by Karunanidhi himself before she moved to the Congress, and one of DMK’s current MLAs is an actor. One notable exc­eption is Stalin’s son Udayanidhi, but then he belongs to the first family. Udayanidhi started as a film producer before turning hero and is now a key election campaigner for the DMK. He is also being groomed to be Stalin’s political successor.

“Udayanidhi’s star appeal may not be very high, but multiply it by the family lineage; then it becomes a potent combination. Being a film hero explains his popularity with the public while his rising graph within the DMK is assured by being the son of Stalin. So we are looking at Uda­yanidhi’s transition from film hero to political hero and possibly to people’s hero,” observes Ran­garaj Pandey, political ana­­lyst and founder-CEO of Chanakyaa Digital Media.

While Kamal and Rajni were tempted to make their political forays in 2017 owing to the vacuum created by the demise of Jayalalitha and Karunanidhi, that vac­ancy may not exist any longer. Stalin is already firmly in control of his party and leading a strong alliance. An electoral win will cement his position as a confident leader. Chief minister Pala­ni­swami has turned out to be a shrewd tactician, having survived for two years and has now forged a broad-based front. AIADMK rebel (now AMMK founder) T.T.V. Dhinakaran, too, displays a new kind of political savvy that impresses young voters. The big players, thus, are in no mood to give even manoeuvring space to new ent­rants. Which raises the question—in a crowded political space, where will Kamalahaasan and Rajni­kant fit in?