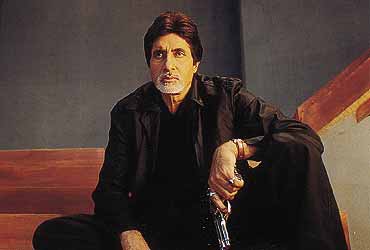 So far as it inaugurates, along with 16 December, the season of hardboiled Bollywood, Aankhen is a move in the right direction. For too long, the last six to eight years to be precise, mush has had an unchallenged run, leading to severe impairment of the traditional Bollywood gumption. Suddenly there is something new in the air—the summer line-up boasts of Company, Paanch, Kaante and Haasil, films which promise to bring back the heady days of Indian machismo.

Yet Aankhen shows where the new masters of violence might falter. It begins with the exploits of a bank manager termed dangerous by the staff—the man, Amitabh Bachchan, is obsessed with work and the institution, to the point of physically assaulting employees who fall out of line. The scene where he does so starts with the manager picking on a 100 rupee theft. Employee-bashing then stretches to a ridiculous length, with Amitabh dragging the poor guy out on the streets. Now, if the intention was to show menace and danger, the effect was lost even before it began. One chilling blow, accompanied by one chilling look, would have been enough to prove the point.

The mix of decent intent and bad treatment extends to the handling of the main plot. After getting fired, Amitabh hires three blind men (Akshay Kumar, Paresh Rawal and Arjun Rampal) to rob his own bank. He forces a blinds' school teacher (Sushmita Sen) to train them. But the interest sustained gets compromised by shortcuts adopted by the director. This kind of a subject requires a subtle touch, which brings out the dark shades of the characters. Though an effort has been made to keep Amitabh and Akshay away from loud proclamations, other characters are forced to emote in the usual trite manner. Paresh Rawal is a good actor but you can't make a thriller with David Dhawan-type comedy.

The whole question boils down to fidelity to a genre—the old action masters of the '70s were working in a different format. They mixed genres while keeping action the king of the pack. The pressure now is to create a consistent, genre-oriented Indian cinema. This, however, requires a proper study of conventions where characters and their attitudes have to be moulded in a particular manner. The wham bam, 'special-effect', slick approach of the superficial variety—seen in varying degrees in both 16 December and Aankhen—just won't do.

"Land Is The Big Issue"