Lane of death: A headless idol in Anjar marks the spot where a whole R-Day convoy of schoolchildren went under 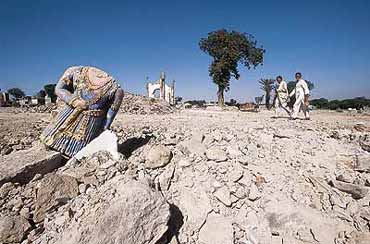 Dhansukhlal still doesn't have his own home to go back to, but he got a lakh of rupees for his son's life. He gave away the money to a local temple. He also got an insulting Rs 500 cash 'dole' three weeks after the quake. As if these insults were not enough for a perfectly honourable retiree-citizen, the government still makes him fill lots of forms these days, nearly a year after the quake—"I have filled three already." Dhansukhlal's quirky sense of black humour is growing stronger by the day. "I think," he says, "the money will keep coming in dribs and drabs even after I die. Who says the state doesn't work? Not I!" These days he's moved in with daughter Meenakshee and his two grandsons Nikunj and Kunjan in town. "I'd go mad if they weren't around. Sweet life is gone."

The sun is peeping out feebly to usher in another new day in this frayed 450-year-old town where collective hopelessness and rage has turned into tired ire. It's left to Karsan Patel, a dapper middle-aged Londoner who visits his old mother in town every year, to go ballistic on the retirees' step. "Forms, forms and forms, that's what the government knows about. It is too damn slow. Look around and see the mess. Bullshit!" he spits out in anger, before disappearing into the morning mist.