A Will And A Wail

The succession battle for the Birla empire takes a new twist. Several versions of the 'original' will appears. Updates 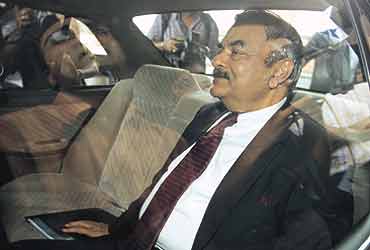 outlookindia.com
-0001-11-30T00:00:00+0553
It's an old saying in legal circles: "Where there's a will, there's a way to dispute it." Not just in the courts, but also in the media. That's exactly what the Birla family is doing in a bid to keep the assets of the M.P. Birla faction from going to Rajinder Singh Lodha, a Calcutta-based chartered accountant who was anointed successor by MP's late wife, Priyamvada. The supporters of Lodha are playing their own games too. Therefore, it's not surprising that all kinds of rumours and half-baked facts are finding their way into newspapers and television news channels. The tilt depends on who one has been talking to and which version of the truth one really believes.

Not just the media, but even communities have started taking sides. Calcutta's Marwari community has logically joined hands with the Birlas in this David vs Goliath battle. A young Marwari businessman sums up: "Our community believes in family-run enterprises and supports feudal social and business structures. And Birlas are at the apex of this pyramid. We'll ostracise the Lodhas for breaching this code of conduct." But, in the same breath, some of them are apprehensive about taking on the Lodhas. As a Delhi-based Marwari puts it, "The Lodhas from Jodhpur are some of the smartest people on earth. We employ them extensively, but never pick up business and legal fights with them."

As of now, however, neither side is leaving any stone unturned to either cast aspersions on Priyamvada's will, which was made on September 9, 1999, and reportedly registered a fortnight later, or to prove its genuineness. So, you have the Lodhas who claim that the signing of the will has been captured on a video and the family has letters that prove that Priyamvada wanted to give her assets to Lodha alone. You also have the leaks from the Birla side that two of the three witnesses who signed the will have turned hostile. In addition, the Birla family claims that Priyamvada had always talked about leaving her business assets to charities and trusts and not to any individual.

The latest twist to the tale is the leak by the Birla group that there are several versions of the will and that at least one of them, which is not the one that the Lodhas are leaking to the media, is the genuine one. This is supposed to be the joint will of the late MP and Priyamvada which says that in the case of death of any one of the two signatories, the assets and properties would stand bequeathed to the survivor and, thereafter, to a charitable trust. This will was supposed to have been drawn up in the 1980s and witnessed by three persons, including a legal luminary. Birla sources are keeping this fact close to their chest but promise to use it as a trumpcard once the hearings start. Obviously, they are hoping that the courts will decide that the older will negates the new one that Priyamvada may have made.

The truth is being distorted by the two sides in such a fashion that there's not even clarity on the size of the M.P. Birla business empire. One version says it's a Rs 5,000-crore empire. Another says it could be as big as Rs 10,000 or 15,000 crore. According to the CMIE Prowess database, the combined turnover of the eight publicly listed group companies of this faction is less than Rs 2,000 crore. Add property, jewellery and other assets and the figure is likely to go up somewhat. And then there's the 25 per cent stake that MP had in Pilani Investments, a major holding company for the entire Birla group whose valuation has still not been worked out although some details are known.

Probably the financial institutions, which have large stakes in a number of Birla group companies, know most of the facts. At the moment, the FIs are keeping mum and watching the events. Last week, at the board meeting of Birla Corp, the flagship of the late MP's empire, they refused to upgrade Lodha from his current post of co-chairman to that of chairman, held by Priyamvada prior to her death.And the expert consensus is that unless the institutions back Lodha, he may not be able to run MP's empire as freely as he would like to. Obviously, the FIs will now look closely at Lodha's professional career.

So, what's Lodha's contribution to the MP group companies as co-chairman? According to two senior executives closely associated with the faction, Birla Corp was headquartered in Mumbai during M.P. Birla's lifetime and Lodha was appointed on its board only in 1991, a year after MP's death. Clearly, it was the doing of Priyamvada, who was keen on him. The year 1999 turned out to be a defining moment for Lodha. That was the year Priyamvada made her will when Birla Corp's headquarters was shifted to Calcutta and Lodha began to take more interest in its operations. Finally, he was appointed co-chairman in 2001. But sources who have worked in Birla Corp say Lodha ran the business in the usual proprietory style, imperious, brooking no dissent and favouring his family over professional managers.

What happens now will depend on a number of factors like the way the legal battle will pan out, or the stance taken by the FIs, and whether Lodha will be keen to take on the might of the Birlas. But one thing is clear: if this tussle continues, a number of business families will take a serious look at their succession issues.