She's said to be a girl with a heart, and a lonely one at that—the reason for l'affaire Ganguly 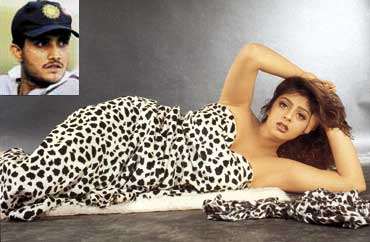 outlookindia.com
-0001-11-30T00:00:00+05:53
She was always famous for her girth and boyfriends. Now Namratha Sadhana aka Nagma seems to have bowled over India's cricket captain Saurav Ganguly with her buxom charms. When news washed up last week that the thirtysomething star had made a trip to a remote Shiva temple at Sri Kalahasthi in Andhra Pradesh with Ganguly to offer prayers, it kicked up a storm. And cricket fans around the country were taking a second look at the girl who seemed to have won over the married Indian captain.

Nagma made her debut in the Hindi film industry over a decade ago, against her family's wishes. She didn't exactly bring the house down playing a reluctant sex worker in Baaghi with Salman Khan. Over the years, while she was cast with a number of stars, her Bollywood career never really took off in face of slinky competition. Her personal life fared no better: a long-drawn affair with Rajeev 'Chimpoo' Kapoor, the youngest son of Raj Kapoor, fizzled out. Then she took a flight down south.

In a remarkable twist of fate, she became a huge success there, working with top stars like Nagarjuna, Chiranjeevi and Venkatesh. She had a relationship and reportedly lived in with Tamil superstar and dmk loyalist Sarath Kumar, who now anchors a get-rich quizshow on Chennai's Sun TV. A reputed film journalist who's known Nagma for several years says: "They had an unpleasant split. The actor used his political connections to harass her so much that she had to flee from Chennai." She was also roughed up in public by alleged dmk workers. Earlier, after a brief stint in the Telegu film industry was cut short off when the star-struck politician son of a former Indian PM virtually chased her out of Hyderabad, she also had to face up to a series of income-tax raids.

Her foray into Tamil cinema did bring her some fame though. Six years ago, the 5' 4" actress (around 54 kg) starred with Prabhudeva in Kadhalan (Lover), a superhit, about two lovers on the run from the girl's angry, evil father. Though Prabhudeva stole the show with some stunning jigs set to racy music, Nagma pulled off a decent performance. Batcha, another film with Rajnikanth, also became a big hit. Around this time, she became the second most popular actress in Tamil cinema, after Khushboo. These days, she can be seen doing a hot number with popular Tamil star Ajith Kumar in Dheena, which is doing reasonably well at the Tamil box office. "She's very quick on the uptake with dances which she manages to pull off rather well even though she's plump," says a top Chennai-based cinematographer, who has worked with her. Bollywood biographer Mohandeep remembers Nagma as a "very pleasant person, very easy to talk to. But I think at some point in her life, she began to feel lonely. Most of her contemporaries were either married, or successful."

That's possibly why Nagma ended up completing a course in Art of Living. That is possibly also why she reportedly fell for Ganguly, in what, according to the tabloid press, is a two-year-old romance with trysts in London, hotel rooms and green rooms in Chennai. Industry people say she's a girl with a heart as well. Some time ago, a Mumbai girl who lost her legs after being pushed out of a running train told doctors that she wanted to meet Nagma as she was an ardent fan. The doctors got in touch with the lady who visited the girl and pooled in some money for her cause. Director Mahesh Bhatt too has always found her "intelligent and a person with strong opinions. And yes, she could laugh at herself."

That was evident when a friend called her last week, "Ganguly has given a statement in a newspaper: 'My house is in order', wonder which house he's talking about," she said. And Nagma reportedly managed a chuckle. Of course, it's not quite cricket to cheat on the wife, but then, the actress has nothing to lose.

Groups Likely to be Banned