A Warm Chair On The Distaff Side

This is a confession in cold print. Perhaps because I am ready to make it. A few years ago I hit what I thought was major emotional turbulence. 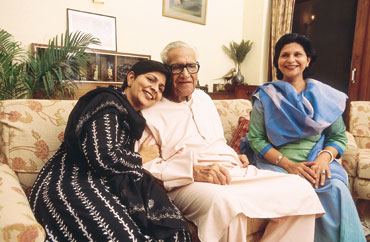 outlookindia.com
-0001-11-30T00:00:00+0553
This is a confession in cold print. Perhaps because I am ready to make it. A few years ago I hit what I thought was major emotional turbulence. At 62, my fit and able father was detected with a malignant brain tumour. His doctors called me from Chandigarh late one night saying I should immediately bring him to Delhi and admit him to the All India Institute for Medical Sciences (AIIMS). "The sooner he is operated the better, and yes, we haven't told your mother it is cancerous. We leave it to you to break the news to her," the doctor's voice trailed.

Pain and confusion crept through me, my thoughts scrambled in various directions. How could he have cancer, he never smoked a cigarette in his life. Should I call my sister or wait till the head of neurology at AIIMS has seen the cat scan? Why did they call me and not her or my brother?

A flurry of activity soon consumed me and buried my thoughts for a while. The doctor at AIIMS looked at the scan, shook his head and said, "It's too far gone. Maximum three months." I kept it to myself and wheeled my father into the operation theatre at 6 am one obscure Delhi morning. I had done something similar before. Hidden from my parents for some time the fact that their son was an alcoholic, a rather violent one at that. I thought I could cope, that it would pass. It didn't, even after my parents were finally brought into the picture.

Something else changed in the process, the parent-child equation, with my parents and I starting to become friends. Sitting outside the operation theatre that morning, I realised why I had got that phone call from the doctor. It was about emotional bonding.

The questions had disturbed me till I found the answer and I soon realised that there had been little need for my having felt that I had been on an emotional roller-coaster. For when I looked around me, I had so many instances of the same and understood it for what it really was—the equation between daughters and parents was changing irrespective of whether it was a daughters-only household or families that had both sons and daughters.

My friend Savita and her younger sister recently flew in to Calcutta from Canada to be with their dying father. What she wasn't quite prepared for was the request her mother would make. She wanted Savita and not "some nephew or cousin" to light the funeral pyre. It was not a statement about breaking an age-old male tradition. It was about a child performing the last rites. Savita is disturbed about the process, of having had to walk around the body and light the pyre, but is not sad that she did. It would not have been less painful for a brother if she had one.

Another friend, Veena Baswani, who works as chief editor at a publishing house, is one of three sisters looking after their father and, as she says, "It's not about being dutiful. It's affection and a bond. You have your own sense of what you want to do. I also think it's about women being more emotionally attached to their parents." Her father, Colonel (retd) H.C. Vijh, concurs heartily, "A boy can never equal the kind of love a daughter gives you. It's not that sons don't love their parents, it's just that the quality is different."

The sheer joy in the Vijh household sheds enormous light on this fast-spreading trend. Col Vijh's spirit at 94 is touching. He's in a wheelchair now but says with great pride that he was playing golf till the age of 87 and going to the Gymkhana Club regularly. His zest is undiminished—untouched in fact—and he has a great time with daughters, grandchildren and granddaughter-in-law.

If it's a Monday, it's movie time with his granddaughter or granddaughter-in-law at home. On Tuesdays and Thursdays, he plays bridge and on Sunday he's playing Flash with his daughters and friends.On Saturdays, he goes out for a drive. When he wasn't well recently and in a private hospital, Veena and her sister Madhu took turns spending nights at the clinic.

Madhu points the changing equation in an important direction. "Women today are savvy. It's not just about taking parents to the doctor. They are financially independent and by nature more home-oriented even if they are working." While it is true that the Indian woman has changed, it is as much a fact that parents, too, have learnt to change along with their children.

Gone are the days when parents visited their daughters' homes after their marriage and came away without even drinking a glass of water. Dr Nibhriti Das, a researcher at the AIIMS biochemistry department, says she's from a reasonably traditional, "not conservative" family and was brought up just like her brother was. They went their different ways as children, he to an engineering college and she in pursuit of a medical career. Her mother was teaching in Lucknow and her father worked out of Gorakhpur where he was with the North Eastern Railways. Nibhriti decided to stay single because she says she wanted to rely on herself for everything.

Things changed a little in 1989 when her mother fell ill. She boarded the Gomti Express, went to Lucknow and persuaded her parents "but not without difficulty" to move in with her in Delhi. They were hesitant at first but "I told them that it was not about them needing her but her needing them". Soon after, she went off to Scotland for three months and that's when they started to treat her home as their own. She lost her mother three years ago, and now it's just her father and her. The brother lives in Delhi too but it's not about him not wanting to take on the responsibility. It's just to do with a comfort zone: daughter's and father's. "I know his every gesture, every mood," she says. Sometimes she even opts out of travelling on work but doesn't see that as a sacrifice.

Well, wonder why it took me time to learn. You don't really need a counsellor to guide you through this one. I am fairly independent. I have a job that takes me to dangerous places. I spent two months in Kargil covering the war; have been in and out of Kashmir, Pakistan and Afghanistan over the last decade. Enjoyed the trials and tribulations. Life is about sitting outside operation theatres as much as in war theatres.

To think that it didn't strike me even when I saw my journalist friend Megha Kumar go about being the professional that she is with as much ease as being a wife and a daughter. Shuffling between two homes and an office, Megha managed what would seem as three full-time jobs. She has a sister and a brother, both of whom live abroad and visit about once a year. Megha made what I think is a beautiful compromise. She decided not to have a child because that would mean dividing time between child and the parents and that she thought would not be fair on either. And yes, Megha's not her real name. She has forbidden me from mentioning it as she doesn't think it's some great deed she's done.

She lost her father last year, I some years ago. We lost not just father figures, but friends. As for the alcoholic brother, alcoholism is a disease. He'll deal with it when he's ready. You see why I'm not ashamed for having confessed in cold print. I was ready.

Head To Head In Chennai