A Tricolour Twist In the 'Apolitical' Script 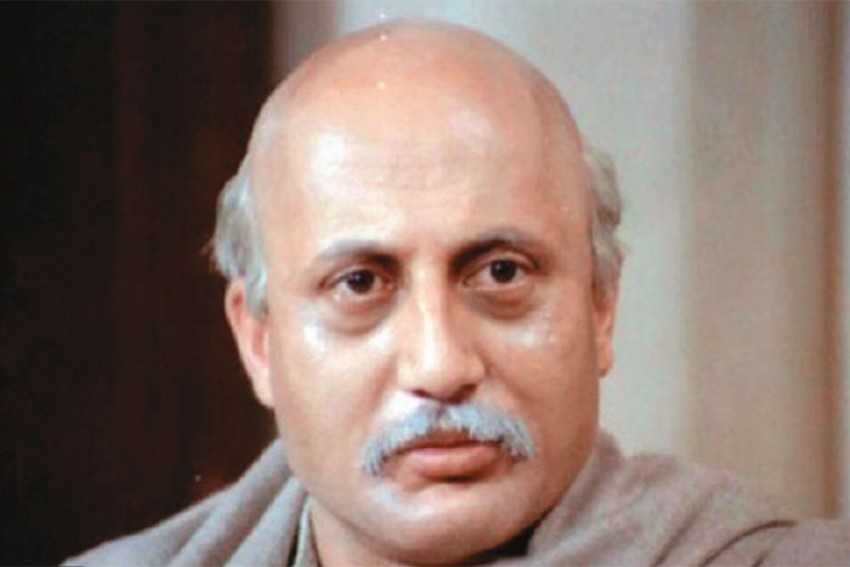 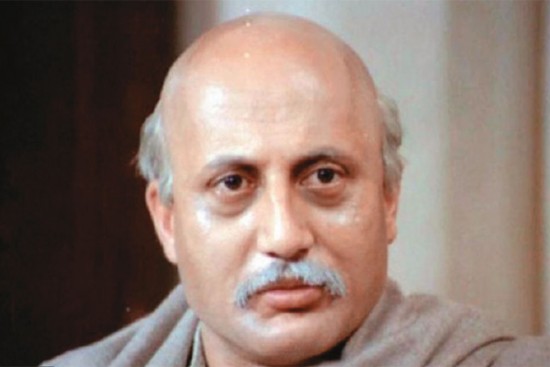 One of these days, Bollywood actor Anupam Kher was in for a pleasant surprise many thousand feet above the ground. In his hands was a paper napkin with the following message scribbled on it: ‘Nice words spoken Mr Kher, for Kashmiri Pandits, in your video.’ Words of praise coming not from just another fan, but from the captain of the flight—enough reason, surely, to warm the cockles of the 61-year-old showman’s heart. No wonder Kher is keeping the memento.

But what exactly has the man been saying that is pleasing men like that pilot in the sky? Last week he tweeted, “The only definition of NATIONALISM for Bharatwasis should be ‘Bharat Mata Ki Jai’. Rest all are escape routes. :)” Again, at a recent debate organised by The Telegraph, Kher lambasted former Supreme Court judge Justice Asok Kumar Ganguly for saying that the Afzal Guru verdict was not good in law. “I’m shocked and ashamed and saddened by what you said Mr Ganguly...that you are calling the verdict of Supreme Court wrong.” Courageous words, to be sure. Statements like these clearly seem to appeal to a section of people. That’s why interviewing Kher these days could mean being interrupted again and again by people coming in to express support for what he says on political matters.

In a few days, Kher will be in the national capital to receive the Padma Bhushan—even though, in 2010, he had declared on Twitter, “AWARDS in our country have become a mockery of our system. There is NO authenticity left in any one of them. Be it films, National or now PADMA.” Now, he tweets he is “Happy, Humbled & Honoured” and this is the “greatest news of his life”.

Last time he was in Delhi this month, for a screening of Vivek Agnihotri’s film Buddha in a Traffic Jam at JNU, already in the eye of a storm over alleged ‘anti-nationalism’, it caused quite a confusion with claims that attempts were being made to scuttle the show. Some, of course, rubbished the talk saying the issue, if any, was one of logistics. Of course, all’s well that ends well, and the BJP-affiliated ABVP had no problem securing permission for the  screening from the authorities.

But Kher had been apprehensive. This was his first visit to the campus that now represented all that he had come to dislike about politics. Like the rest of the television audience, most of what he had seen of JNU were visuals of ‘anti-national’ students and faculty raising their voice and their fists in defence of their idea of democracy, mostly at odds with Kher’s (mostly tweeted) positions. Having famously ruled out lynching of people acc­used of selling/eating beef and murders of rationalists as symptoms of growing intolerance in Indian society, Kher surely had much to worry about how ‘tolerant’ JNU’s ‘anti-nationals’ would be towards a film that wore its anti-leftist, anti-Naxal and pro-“wealth creation” sympathies on its sleeve.

Maybe that’s why he wanted to reach JNU in good time and feel the mood of the day. Over a quick cup of tea, he chatted about the film and the campus with Agnihotri and censor board member Ashok Pandit, who had acco­mpanied them.

Then something happened that conjured up before Kher’s avowed nationalism the very thing he was readying to rail against. An hour to go before the scheduled time of the movie screening, and the news broke that Umar Khalid and Anirban Bhattacharya, two of the organisers of the February 9 event on Kashmir that was at the heart of the ‘JNU crisis’, had been granted bail by the sessions court. Kher heard of students gathered outside one of the hostels celebrating the imminent return of their jailed friends by dancing, singing and smearing each other’s faces with gulal. He heard that a victory march was being planned for later that night.

“He has a right to say what he feels. It is good that people are expressing their opinions. If that leads to debate, it’s good for democracy.”
Govind Nihalani, Filmmaker

When he finally holds the mike, Kher knows he cannot let go of the opportunity to take a jibe at the students: “I heard people are doing a victory march. This is not an Olympic victory. They are not Tendulkar or Hanumanthappa.” He ends his speech, not surprisingly, with ‘Bharat Mata ki Jai’.

How did Kher the actor end up Kher the prime-time comedian? Starting out in the 1970s, Kher got his big break with Mahesh Bhatt’s Saaransh (1981). His character, Pradhan, he says, was not just a pivot for his career but it also affected him as a person and shaped his politics. “I didn’t understand at that time exactly who he was. I thought if I become a person like this when I am old, it would be wonderful,” he says.

The conversation is interrupted by yet another phone call. This time he is told that Vikram Singh Chauhan wants to talk to him. “Who is that? Haan, send me his number.” It could be just any Chauhan with that first name, or it could be the recently infamous one-and-only Vikram Chauhan—the lawyer felicitated by fellow lawyers for making sure that journalists and JNU students union president Kanhaiya Kumar were thrashed in court last month.

So, is Kher just speaking his mind in the only way that comes naturally to him, or  does political ambition fuel  his outrage?

Rohini Hattangadi, his co-actor in Saaransh who remembers him fondly as a friend, is a trifle surprised. “He could alw­ays speak well and seemed to be socially conscious, but I never thought he had political ambitions,” she says.

When asked if the actor’s mind is revealed through the characters he played in the more political of the films in his body of work—say, Hazaar Chaurasi ki Maa and Maine Gandhi ko Nahin Mara—or in more popular ones like Hum Aapke Hain Koun...!, Veer-Zaara and Dil Bole Hadippa, Hattan­gadi says that is not the case.

Filmmaker Govind Nihalani, who direc­ted Kher in Hazaar Chaurasi ki Maa, has enough trust in the actor: he feels that he trusts Kher’s professionalism enough to not worry about his political views marring his acting. “He has a right to say what he feels,” says Nihalani. “It is a good thing that people are expressing their opinions. If it leads to deb­ate, that is the mark of a healthy democracy.” 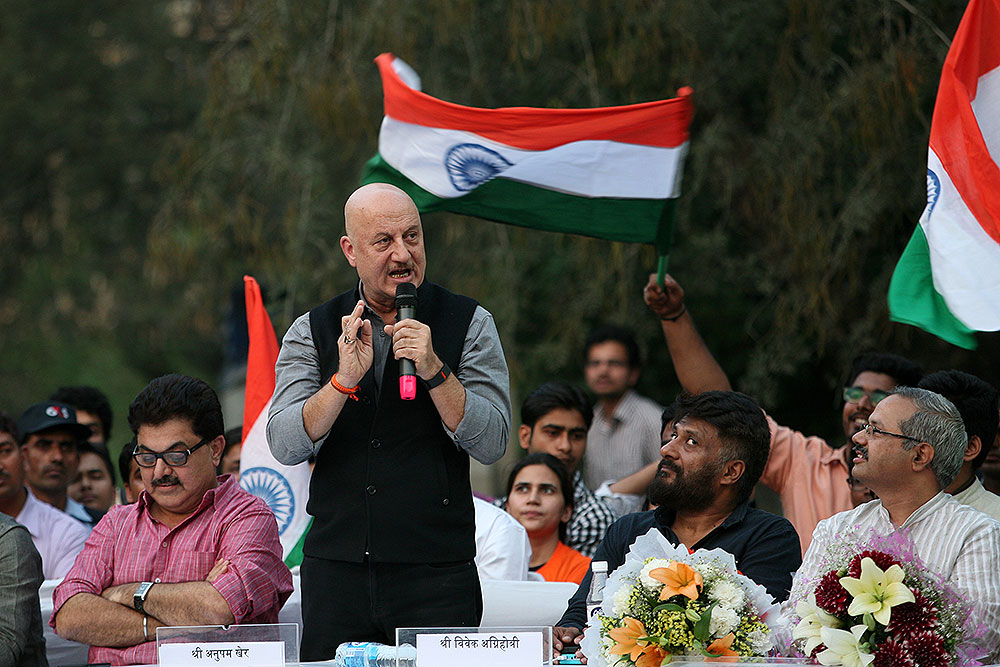 Bully Pulpit Talking nationalism at a film screening in JNU on March 18. (Photograph by Sanjay Rawat)

Kher, though, would not go along with quiescence, having gone hammer and tongs at those who have raised their voice against what they see as ‘intolerance’ of dissenting views. He even led a protest march in Delhi against those protesting against the shrinking of democratic space to voice contrary opinions. Indeed, some have seen his barbs as expressions of intolerance towards the very use of the word “intolerance” in reference to Indian society.

“Anupam Kher could always speak well and he seemed to be socially conscious. But I never thought he had political ambitions.”
Rohini Hattangadi, Actress

“It is fashionable to criticise the country and talk about what is not working out. Don’t pay attention to these people, just go about your work,” he advises JNU students. Don’t speak ill of your country, no matter what: that seems to be Kher’s prescription on what can and what cannot be said. Playing all kinds of characters on film may have helped prepare Kher for a versatile, even black-and-white role in his political innings. Preoccupied with his films until 2011, that year became a turning point in his life as he became a familiar face of the India Against Corruption campaign. “Manish Sisodia called me and I took a flight from Pune to Delhi,” he recalls. “I saw this sea of Indian flags and heard passionate speeches. I think that was the first time I spoke publicly on issues that bother me. I am proud of those days.”

Perhaps, Kher’s discomfort with JNU’s political moorings and the militant avowal on campus of the student’s duty to intervene in public issues can be traced to his own student days. Aft­er all, expressing political opinions was the last thing on his mind then, so preoccupied he was with scouting for opportunities as a theatre actor. Living in a joint family where politics was rarely discussed would have only reinforced his abstinence from things political. Even growing up in Shimla, in the shadow of the Sino-Indian war of 1962 and the Indo-Pak war of 1971, which led to the Shimla Agreement, could do little to change his priorities.

Kher laughs as he recalls how as a skinny college student, he once donated blood and fainted. “It was in my first year of college. I heard an army general speak on how the army needed blood donations. We were also told that we would get Rs 11 and a boiled egg. I went to the hospital in a trance.”

The ‘apolitical’ college lad, who managed to keep himself immune from the storms that raged across campuses through much of the 1960s and ’70s, is today reinventing himself as uber-nationalist gadfly. So what happened in the past few years?

“Nothing happened,” he waves the question away with a flourish. “You are trying to slot me. Even now, I am not in politics. If you are tracing my genes to the BJP or the RSS, let me tell you that we were just too busy earning our living.” Insisting that speaking up is a habit with him, and not just in politics, he says, “When I am upset about anything, I don’t wait to say it. If the food is not good, I will say it openly, even though it has often upset my friends’ wives.”

For Kher, it’s all about Modi the PM. “My respect is for the prime minister, for what he said and what he says, for what he has done and what he is doing,” he says. “I don’t care much for the party and its politics, though I do campaign for my wife, Kirron, who is a BJP MP.” Separating the PM from the ruling party enables him, perhaps, to condemn right-wing violence at the same time as he defends the prime minister’s sile­nce on it. And then, predictably, goes on to “what about the Emergency and 1984”.

He insists he is raising his voice for the nation alone, and not in the expectation of being offered a position by the government. Claiming that the Congress, the BJP and other parties had approached him in the past 10 years to join them and contest elections, he says, “I was not prepared then, and I am not prepared now.”

And he was not prepared when a student listening to his diatribe against JNU’s ‘anti-­nationals’ asked him a simple question: “If Gandhi is the father of the nation, please tell us the name of one woman you think is important enough to be made Bharat Mata?” He doesn’t really answer that question.

So, what really makes Anupam Kher angry? Is the loosening of speech and baring of heart because of Twitter where he reaches 6.5 million followers. “Maybe if I was not on Twitter I would not have become so vocal,” he admits. “The platform makes you feel alive.”

“Why can’t our children chant slogans in admiration of our prime minister in schools? What’s the problem?”

(At the Jaipur Litfest)

“Please do not target the armed forces for your petty politics, Kanhaiya Kumar, there is a stiff price to pay”

“Pest control at home brings out cockroaches and insects; the house gets cleaned. In the same manner pest control is going on in the country”

(Following arrest of JNU students on charges of sedition)