A Town Comes To Mourn

Back home, Afzal’s family is inconsolable, and angry at his death being politicised 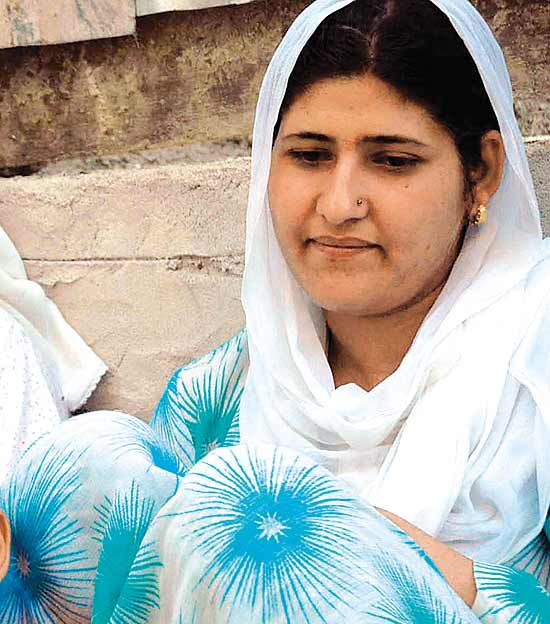 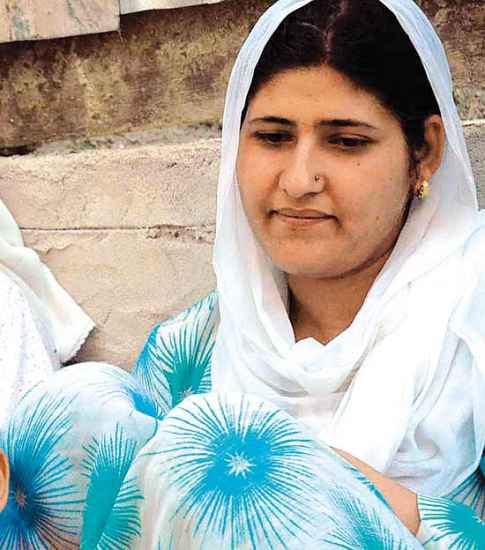 It has been eleven days since Afzal Guru was hanged, and Sopore is in mourning. The apple orchards encircling the town stand bare in the winter freeze, the temperatures at shivering point even during the day. The town itself is crawling with the CRPF and the army, as always. They are everywhere: in the alleys, on the streets, around the main square. As we go past the only entrance to the village Afzal Guru is from, Seer Jagir, scores of local policemen and riot-control vehicles can be seen camped out at the only playground the town has. It looks like an island of sorts, with the army at the centre and the river Jhelum around it.

We park our car outside Afzal’s anc­estral house. A black banner, alongside another bearing the face and legend ‘Shaheed-e-Watan Afzal Guru’, flutters in the icy wind on an otherwise sunny February day. A young boy appe­ars on the terrace of the double-storey house. But Ghalib, Afzal’s only child, disappears just as soon. Not wanting to intrude on his grief, we decide to leave him alone. But before we can move any further, we hear an angry voice scream out: “What more do you want? You have all killed my husband. You hanged an honest man to fulfil the conscience of your people. You have taken away everything I had. Leave us alone....” 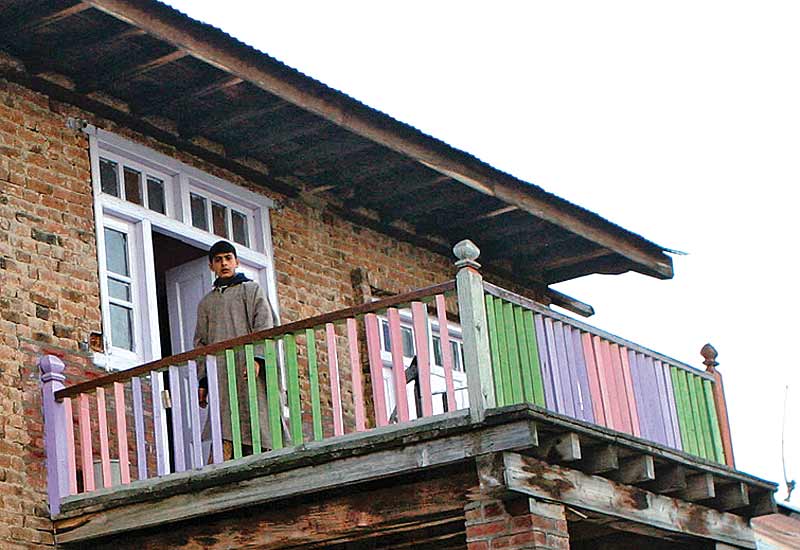 It’s Tabassum, wife of Afzal Guru. It hasn’t been long since the news of her husband’s hanging on February 9­­—after having spent seven years on death row—filtered in through television channels. The same ones showing ministers and politicians congratulating themsel­ves on television cameras for sending a terrorist to the gallows. The Gover­n­ment of India letter bearing the news arrived two days later, well after the execution. The hanging was a secret, but the grief is public. And Tabassum is inconsolable: “You are all butchers,” she continues to scream at us. “You killed him without any evidence and reason. You killed him for your politics and your games. Why have you done this to me?” The question hangs in the empty air; we do not have an answer.

Surely even a terrorist deserves the benefits of a legal system till the very end? The state had made its decision, but Tabassum, like many others, was left wondering whether Afzal was given a fair trial. As she speculates a future without her husband, Kashmir speculates about its future in the aftermath of the hanging.

People have gathered in the upstairs drawing room. Cousins, brothers, uncles, other relatives, they are all here, talking in groups. Just the, there is a call from the local PDP leader and an animated conversation breaks out. The party, a family member informs us, has been making overtures to Tabassum.

Aijaz Guru, Afzal’s elder brother, is angry. “No one supported him,” he says, “be it Kashmir’s politicians, separatists or anyone else. They all abandoned him. Now everyone is playing politics in his name, drawing mileage out of his death. Everyone is gaining at the cost of a poor Kashmiri’s life.”

“He never wrote to them (the separatists),” says Tabassum. “It’s all just a gimmick by separatists for political gains.”

A thin man joins the gathering at this point, quietly listening to the discussion around him. Afzal’s younger brother Hillal is less concerned about the politics outside, he thinks there is more that is being played inside. “No one used to come here,” he says. “Tabas­sum has been living with her parents for the last few years. Now they have gathered here for the mourning of my brother, but all that is going on in here is politics.” People have already started making money in Afzal’s name, Hillal says. Local politicians have started dividing the family on political lines. “No one is telling the real story. It was only Tabassum who fought for her husband. Even I am not in a position to help her. I am a poor man and it is hard to survive here.”

Afzal and his brothers have led completely different lives. Elder brother Aijaz is a prosperous timber merchant, his prosperity evident in his impeccable attire. Hillal looks, and is, less prosperous. They had not kept in touch much over the last few years, but Afzal’s death has brought them together. “People are planning a rally,” says Aijaz. “Thousands will gather for it and march in protest. I hope the situation doesn’t get out of control.” He’s willing to fight for justice for his brother but at the same time maintain a safe distance from the politics. “I am an Indian,” Aijaz is quick to emphasise. “I am a businessman who has nothing to do with separatism and I have been living separa­tely from the family for the last 15 years.” 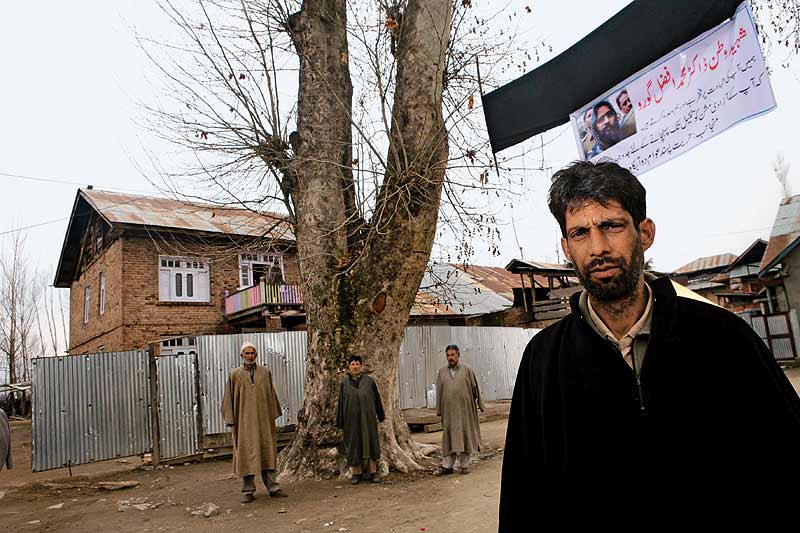 Meanwhile, the drawing-room discussion veers towards the JKLF from whom Afzal had disengaged but which ex-miltant badge he had to wear the rest of his life. The JKLF, family members say, should not be allowed to get any mileage out of the hanging. The PDP has approached them, but the family is confused by the direction they should take. The National Conference too has approa­ched Afzal’s wife, but there are no takers for them in this house of mourners. Chief minister Omar Abdullah may cry himself hoarse saying he was kept in the dark, but no one’s willing to grant him benefit of the doubt.

A group of villagers has gathered outside. “He (Afzal) was different from the others in his family,” they tell us. “He was a good student, a kind person and an honest man. He was influenced by the idea of an Azad Kashmir.” Younger brother Hillal could not agree more: “He was not like us. He believed in Islam and humanity. He used to read a lot and think about the future of Kashmir, our people and culture.”

“Now everyone is playing politics in his name, drawing mileage out of his death,” says Afzal’s elder brother Aijaz.

Her anger dissipated for the moment, Tabassum too offers a few glimpses into their married life. She says Afzal was a gentle man who wanted to lead a simple life. “I will always be proud of being his wife, nobody can change my belief,” she says. She also declares that all the letters Afzal is said to have written to the separatists are actually fake. “He never wrote to them. All that has surfaced in his name is nothing but a gimmick created by separatist leaders for their political gains.” In one such letter to Syed Ali Shah Geelani, Afzal is said to have claimed that he was ashamed that his family had asked for a mercy petition as he wanted to die a martyr. Tabassum claims Afzal never wrote such a letter. “He never apologised for the mercy petition,” she insists. The family categorically maintains that most of the news about Afzal is simply not true and has been planted by different political agencies. “But there is no point in talking about it now,” says Tabassum resignedly. “Why are these questions being raised only after my husband’s death? How many people know about the kind of torture he had to endure in Delhi? Will we ever know under what circumstances he was forced to make a statement in front of the media?”

The family insists we avoid talking to Ghalib, Afzal’s teenage son. He was robbed of the simple pleasures of growing up on his father’s lap, listening to him tell stories, or even poems. “My son will follow the same path as his father. Become a good, kind and honest man like him. His father is now a hero, he too will become one,” says Tabassum, determination momentarily overshadowing the grief in her voice. Ghalib may be young but perhaps he’s not entirely unaware of how his father’s death marks an important chapter in the Kashmir saga.

By Panini Anand in Srinagar. Edited online on Monday,Feb 25.