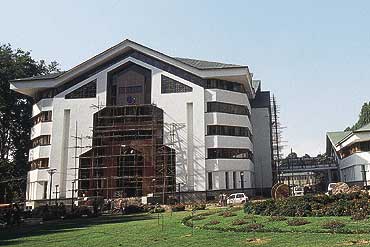 outlookindia.com
-0001-11-30T00:00:00+0553
It's a paradox difficult to comprehend. Given over a decade of armed insurgency, death and destruction is what everyone has learnt to live with in the Valley. With houses ravaged and thousands left homeless or dead, it's a story of misery. Yet, property prices are booming. The real estate business is thriving, with land sharks and middlemen making a killing. Officials in the property registration office in Srinagar reckon that prices in residential areas have risen almost seven-fold and by over 10 times in commercial areas. By some estimates, Rs 500-600 crore of property has been bought in recent years.

"All this has happened only in the last few years. The boom has been fuelled with massive amounts of money being pumped in from various quarters," says a senior police official. Strangely, despite the soaring property prices, there are any number of takers who are more than willing to put up these astronomical sums.

Sample this. A kanal (about one-eighth of an acre) in Srinagar's Nishad Bagh, which was Rs 6-7 lakh in the pre-militancy days, now goes for Rs 16-20 lakh. Land in Rajbagh and Jawahar Nagar costs Rs 20-25 lakh for a kanal, when prices were a third before. Prices even in satellite colonies on the airport road, such as Barzulla and Sanat Nagar, have risen sharply. "A kanal here costs anywhere between Rs 10 lakh and Rs 12 lakh. It was about Rs 3 lakh before this boom began," says a revenue official.

What accounts for this dramatic upward spiral in property prices? Who is responsible for it? Senior officials in Jammu and Kashmir say that to a great extent, huge amounts of money is pouring into the Valley as well as other parts of the state. "Some of it is from Pakistan to sustain terrorism, petro-dollars from West Asia and from pro-government militia," says an intelligence official. In addition, some of the funds from the Union government for security forces and its holding operations has been siphoned off. "Those flush with this wealth have realised that property is the best investment," says a government official.

The state's chief secretary, Ashok Jaitly, also subscribes to the abundance of funds theory. But, he adds, "The construction boom has been happening for some years now." Jammu too has seen a spurt in real estate prices of late, he elaborates. Much of this newly-acquired property, especially the property owned by Pandits who have migrated from the state, has been registered under benami (false) names. For instance, a top bureaucrat's house in Nishad Bagh is registered in his domestic help's name.

In the case of commercial property, many new acquisitions are converted into handicraft showrooms. The reason is that ill-gotten gains can then be legitimised by cooking up the sales figures. "Some have even gone to the extent of opening up showrooms in Jammu and cities like Bangalore and Delhi," says a Srinagar businessman.

The manifestation of this fresh bout of affluence is an unprecedented construction boom. New concrete structures are coming up in the city centres. In other cases, old structures are being pulled down and rebuilt. The spillover effect is on land costs. "Property prices have been appreciating by almost 25 per cent every month for the last two years," says a Kashmir University professor.

Worth mentioning is the staggering commercial property rates. A 1,000-sq ft shop in Lal Chowk, in the heart of Srinagar, Rs 7-10 lakh earlier, now costs Rs 65-70 lakh.Likewise, a shop on Residency Road, the other major commercial centre, also goes for Rs 70 lakh. Erina, a famous cold drinks haunt, was recently sold at this sum as the owner found the money offered irresistible.

What's baffling is how small-time shopkeepers or businessmen have acquired the money to invest in property. "There is one person who ran a small warehouse six years back. Today, he is building a hotel-cum-shopping complex in a prime area," says a property broker. And in almost most transactions, it is hard cash which passes hands.

In fact, the idea now, say property agents, is to convert residential properties to commercial ones. Karan Nagar, adjacent to the state secretariat, is one example, where the going rate for a kanal is Rs 16 lakh.

The divisional commissioner of Srinagar, Khursheed Ganai, has a different take on the subject. "There is more migration from the smaller towns like Budgam and Pulwama to Srinagar. Since there is an infrastructure in place and assured security, property prices have risen," he says. However, he does not discount the possibility of hawala monies propelling this boom.

Property registration courts in Srinagar report registration of 40-50 deals almost every day. Even here, say insiders, means are being adopted to show that property is purchased much lower than the market price. "Every time a registry is done, 24 per cent tax is levied on the property price which is collected by the land revenue department," says a state official. To beat the system and avoid this tax, property brokers work in collusion with government officials to show the land was purchased at a far lower price.

Just recently, over 400 houseowners behind Srinagar's airport road were told that their elegant houses did not belong to them but to the state. Obviously, the land mafia had been at work. With the connivance of land revenue officials, this group had destroyed the latha (revenue records), converted state land into private land and sold the plots for residential purposes. These colonies—part of Rawalpora and Ompora, located on the city's periphery—are spread over 100 acres of prize land. Conservative estimates put the value at nearly Rs 150 crore. Subsequently, 14 revenue officials have been suspended and a probe launched to get at more officials who are reportedly involved.

Besides this major bust, there has been another case where a prominent businessman was allotted a piece of land valued at some crores at a prime location in the city. He had begun construction but later discovered that the land registry was "fraudulent".

The sharp and sustained rise in property prices has naturally raised eyebrows. But with nobody concerned about the source of the funds being poured in, the real estate boom is growing by the day. Ironically, all this is happening in a state declared as a disturbed area.

News For The Ticker