India-Pakistan war-talk is now done by the armies, backed by a jingoistic media 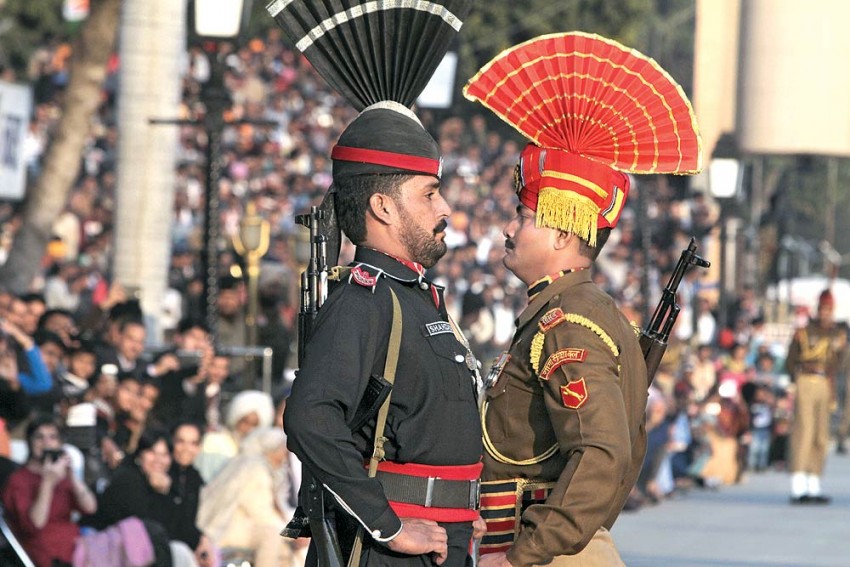 Border Tactic
A Pakistani Ranger and a BSF jawan do their warlike routine at Wagah
Photograph by AP
Ayesha Siddiqa June 02, 2017 00:00 IST A Thousand Year Rattle 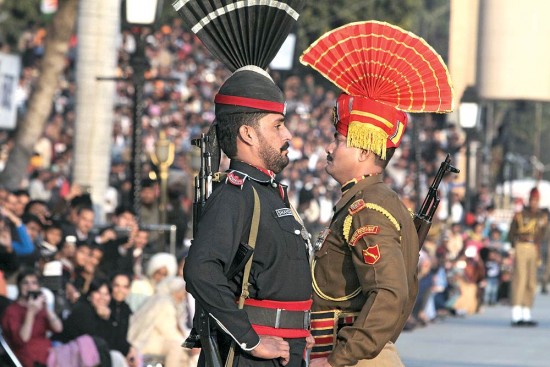 If there was a slur today in Pakistan, besides being called a liberal, it is to suggest engagement with India or appearing as weak. Actually, liberalism is also termed as being pro-India. Incidentally, the situation on the other side of the border echoes this perception. While political governments have remained fairly restrained on both sides, the war narrative has acquired hype. Both India and Pakistan have used their fourth arm—the media—to inspire their common man to want a confrontation.

Actually, bilateral tension tends to increase every time both states are at a similar confidence level and there is reduced clarity regarding thresholds—will the adversary blink or you? In many ways, the times are a reminder of an almost similar uncertainty during the 1980s. There were several events spaced out through the decade that kept tension high and fear of war alive. Then, it started off with the rumour of an Indian plan to attack Pakistan’s Kahuta Research Laboratories, just like Israel had bombed Iraq’s nuclear reactor at Osirak in June 1981. Islamabad responded by spreading a message that it would react by bombing India’s nuclear facilities at Trombay. This was then followed by the Siachen conflict. Although both countries had eyes on the glacier, in 1984 India succeeded in occupying the glacier, and that turned it into the highest war zone. Then there was operation Brasstacks by India in 1986 which, though interpreted incorrectly by a particular group in Rawalpindi GHQ as a premonition to war, did indicate a plan to cut off North Pakistan from the South across the main artery in Sindh. In response, the Pakistan army carried out its own exercise in 1989—Operation Zarbe Momin—that was meant to test the new military strategy of offensive-defence, which has partially worked as a countermeasure to Brasstacks. Despite that, the exercise did not impress many domestically or int­ernationally; it gave ideas that were applied after conditions in the Kashmir valley deteriorated in 1989, leading to the beginning of a new generation of militancy and tension. This was also the period when the bilateral conflict started to turn from being simply territorial to ideological. Though events like General Zia-ul Haq’s cricket diplomacy provide temporary respite, tension remained high throughout the decade.

The similarity between the 1980s and now is probably limited to the opacity of the threshold and an ambitious leadership on both sides that is confident about its ability to shout down the adversary. From Pakistan’s perspective, Narendra Modi is a reminder of a militarily ambitious Indira Gandhi, who had in 1971 caused the dismemberment of Pakistan, which was many years later claimed by the current Indian prime minister. The only thing that Rawalpindi fears it lacks now is a leader like Gen Zia-ul Haq or even his predecessor, Zulfiqar Ali Bhutto, who both were eager to fight a ‘thousand years of war’ with India. Although a product of the military dictator, Pakistan’s current prime minister, Nawaz Sharif, seems strangely inclined towards peace with the traditional adversary. This is despite the fact that it has cost him tremendously in political terms. Nonetheless, Sharif’s domestic rivals, who are ever desirous of replacing him, are a sufficient counterbalance to keep the national narrative aligned to the traditional perspective. They, along with the military, have restrained Sharif from making any concessions that are considered antithetical to national interests.

Worryingly, unlike the ’80s, it is military commanders rather than political decision makers who are issuing statements.

The media used to help as a moderator in both India and Pakistan. In fact, this is one of the key differences between the 1980s and present times. The merger of the military with mainstream media and general discourse on national security has made the situation graver. While Pak­istan’s civil society has suffered in the last couple of years from a systematic reduction in its capacity to challenge the military narrative, the popular Indian media seems far more aligned with the perspective of the armed forces. The sound of war drums on television screens has grown far louder, taking the decision-making process almost out of the hands of the leadership to those in uniform or the excited television anchors or print journalists who are happy to blow the bugle. The media is certainly a new variable that has brought a shift in the public mood on both sides. Unlike the 1980s, when despite the constant war cry serving as background music and lesser people-to-people contact, society wasn’t drenched with an enemy image of each other. People took every spike in tension in their stride. Surely, the several terror attacks, the hostile rhetoric, the ongoing Kashmir conflict and images of human rights atrocities in the Valley contribute tremendously to public perception, but its presentation has added immensely to making enemies out of people.

It is in this backdrop of unprecedented public suspicion of the enemy that the two states have gai­­ned confidence at their respective level to challenge each other. Narendra Modi’s increased domestic con­fidence, laced with his desire to appear a strong man in India and South Asia, seems to have met a match, though fairly unequal, with a Pakistani est­ablishment willing to stand its ground. While during the 1980s it could match India due to injection of better quality weapon systems from the US, now it has the confidence to lock horns because of its par­t­nership with China. Not that Beijing will fight Islamabad’s war with New Delhi, but this is a strategic partnership in which Pakistan has a sense of ass­urance that China will not allow any major harm to its South Asian ally. This means that it can look India in its eye and hope that the Modi government may blink in face of a troubled Kashmir, a problem that will not necessarily get resolved through heavy-handed tactics of the Indian armed forces. It does not mean that India would agree to hold a plebiscite in the Valley, but it may be forced to open negotiations with Pakistan. The image of human rights atr­­ocities in Kashmir get splashed in international media and question the claim regarding India being a strong democracy. In Islamabad, there is also a sense of relative comfort and confidence drawn from it, that Modi could not make Pakistan irrelevant to the world or isolate it internationally. Fur­t­hermore, while relations may not be at the best with neighbouring Iran and Afghanistan, or the old and powerful ally, the US, key generals and diplomats still believe these to be surmountable problems.

These are relative positions, which will change over time and have an impact on the strategic calculus of either side. However, in the short to medium term, the high levels of confidence mean greater possibility of outbreak of a limited war or endless skirmishes that result in loss of precious lives. Thus far, neither side wants to get pushed up the escalation spiral, which is why the showboating has rem­ained limited to unverifiable claims from either side of punishing the adversary. The worrying part, of course, is that unlike the 1980s, it is military commanders rather than political decision-makers who are issuing statements. The direct involvement of commanders relegates political leadership to a secondary position from where they cannot really manoeuvre public opinion. What this essentially means is that the coming months and years would remain a roller-coaster ride. The shifting of strategic camps by both India and Pakistan adds another layer of tension in which the biggest collateral damage will be in form of human contact and faith in humanity across the border.

(The writer is a research associate at the SOAS, University of London South Asia Institute and author of Military Inc: Inside Pakistan’s Military Economy)

Between The Pantomime And The Real Thing