A Straw Plebiscite: No

The '62 war only boosted pro-India spirits in Tawang, but some grumble about how Tibet is developed 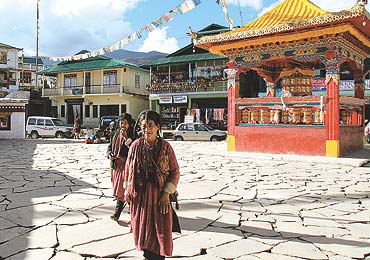 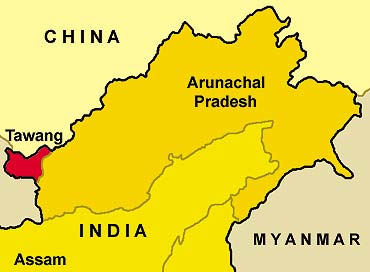 Four-and-a-half decades is not a long time. Not long enough, anyway, to wipe away the memories that this sun-kissed valley, nestled in the stark and rugged reaches of the Himalayas, still recoils from. Memories of their land being overrun by Chinese troops, of families leaving behind their earthly possessions to flee to faraway jungles, of returning to see their land littered with the decomposing bodies of Indian soldiers and the ignominy of having their sacred hearths 'defiled' by the Chinese—who they still revile for hounding their spiritual head, the Dalai Lama.

Now, once again, those memories are being revived by talk of China offering Aksai Chin to India in return for Tawang. The very thought that Beijing continues to lay claim to this free land, where prayer flags flutter in the icy winds and the gurgle of streams blend with chants from Buddhist monasteries or gompas, raises the hackles of not just the Monpas, who form the majority of Tawang's population, but other residents too.

Yes, they say, Tawang was intermittently part of Tibet and used to generate more than a third of Tibet's total revenue. But that was in the past. The present reality is that they're Indians, often speaking in Hindi even among themselves, and are proud to be Indians. Not least because India has provided refuge to their god on earth, the Dalai Lama. And people here are categorical that they won't accept becoming Chinese citizens.

The fertile Tawang valley, just 37 kilometres away from the McMahon line that serves as the international border, harbours many a tale of patriotism and heroism of the ethnic Monpas risking their lives to help Indian troops fight the Chinese, of guiding Indian soldiers through treacherous terrain to safety. The Chinese invaders, recall the old-timers, never harmed them. "But there was never any question of our people supporting the Chinese either at that time, or now, or ever in future," Tawang's additional deputy commissioner Lobsang Phuntso told Outlook emphatically. He was a lad of ten when the Chinese entered Tawang, and fled to the jungles of a neighbouring district, where he and his family lived on fruits and roots, returning to Tawang only after three months, he recalls.

Today, there are few visible scars of the Chinese invasion. The grand Tawang Ganden Namgyal Lhatse Ling, popularly known as the Tawang monastery, which was desecrated and partly destroyed by the invaders, has long since been repaired. But a stark reminder of 1962 is the war memorial, shaped like a stupa, which towers over the Tawang valley. A Buddhist monk performs rituals and prays every morning for the souls of the 2,420 Indian army officers and soldiers whose names are engraved in black granite plaques around the stupa.

Trenches dug by the Chinese pockmark the scenic mountains; one such marks the boundary of Goleng's property at Kartoth village, 14 km away from Tawang town. Goleng, now a businessman and public leader, was just 12 years old when the Chinese occupied his land. His memories are still fresh: "The Chinese attacked Tawang town and captured it within three days. I fled with my family on foot. But after trekking for a few days, we came across Chinese troops who told us not to flee our own lands. They told us: 'We've come here to throw out Indians from our lands. You have nothing to fear. You are the same people as us. The Indians have sharp features and hair on their chest. But we are similar in looks and physique. Go back to your village'," recalls Goleng. "We returned to Khartoth and saw Chinese soldiers all over. They were nice to us, even helping us harvest our crops. They carried out an intensive campaign to win us over. But they weren't successful. We could never accept them as they had persecuted Buddhists and the Dalai Lama. "

Goleng claims he saw wounded Chinese soldiers who wouldn't make full recovery (and would thus be a burden on China) being administered lethal injections by the army doctors at the hospital the invaders had set up in Tawang town.

Chombay Kee, a hotelier and tour operator here, is a graduate in mass communications from Mumbai, and the modern face of the Monpas. "We were a very traditional, religious people. Many Monpas still are. But with education, there's more awareness about the persecution of Buddhists in Tibet. Thus, the anger against the Chinese hasn't dissipated," he notes.

A few, however, add a note of dissent. "There aren't many employment or business opportunities here," says Jambey Tsewant, an academic. "But the Chinese have developed Tibet, living conditions there are much better than here. Murmurs are being heard from some unemployed and disgruntled youths that being part of China wouldn't be a bad idea. The cure for such seditious thoughts is accelerated development," he adds.

A telling example of contrast between this and that side of the border is the 345-km treacherous and arduous route between Tawang and Tezpur in Assam. The journey takes 14 back-breaking hours. This, when Chinese posts on the other side of the divide are connected by four- and six-lane highways.

Tawang monastery, an important seat of the Gelugpa (or yellow hat) sect of the Mahayana school of Buddhism, also produced the sixth Dalai Lama, Tsangyang Gyatso. Since Tawang was ruled from Lhasa and since China claims suzerainty over Tibet, it claims that Tawang also falls under the Cuona district of Shannan prefecture of the 'Tibet Autonomous Region'. The 550-mile McMahon line that serves as the disputed international border was drawn up by British administrator Sir Henry McMahon in 1913-14 as a border between British India and Tibet. But even though Tibet accepted a tripartite (British India, Tibet and China) pact at Shimla in 1914, the Chinese refused to do so. That's the position even today.

Many in the security establishment feel the Chinese are not really serious about exchanging Aksai Chin for Tawang. "And there's no question of India giving away Tawang, given its tremendous strategic importance. Doing that would mean inviting China to dominate the Brahmaputra Valley," says a senior army officer at the Eastern Command headquarters.

But people here have a different take on the issue. "Having Tawang means getting Bhutan (which forms the southern boundary of this district) under its sphere of influence. Bangladesh is only too willing to play ball with China," notes Nwang Norbu, a public leader. "All that will remain then for China to gain access to the Bay of Bengal from Tibet is the fragile chicken's neck corridor (in North Bengal) that connects the Northeast to the rest of India—that would be child's play for the Chinese," he explains.

For people in Tawang, the strong presence of the Indian army is reassuring and an insurance against any change in Tawang's present status as an integral part of India. With a few brigades headquartered here, Tawang is more of a garrison town. But one where the olive green of the soldiers provides a happy and secure backdrop to the maroon robes of the Buddhist monks and the picturesque five-pointed black cap of the Monpas.