A Strategic Change Of Heart 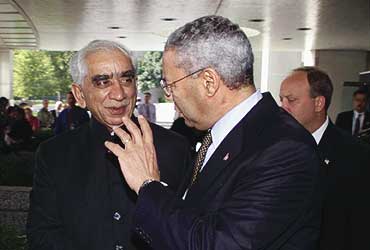 outlookindia.com
-0001-11-30T00:00:00+0553
Q: Mr President, do you feel like you've got the full support of President Musharraf? And how hard is it going to be for him to live up to his pledges, given his domestic situation?

Bush: I said we'll give the President a chance to perform, and I believe he has done so. We will work and consult closely with Pakistan and India to make sure that that part of the world is as stable as can possibly be stable.

The US secretary of state Colin Powell's visit to Islamabad, New Delhi and Beijing arises primarily out of the US' preoccupation with Afghanistan and the nature of Pakistan's cooperation with the US in its efforts to target Osama bin Laden and Al Qaeda's nodes of terror in Afghanistan.

His visit to New Delhi this week assumes significance also because this is the first by the secretary of state to this part of the world. Particularly in light of Bush's statement, which clearly indicates that there's no ambiguity in America's concerns about Pakistan's behaviour in sponsoring terrorism.

This became obvious when Pervez Musharraf called up Atal Behari Vajpayee to offer his commiseration against the terrorist attack on the j&k state assembly. The US set the ball rolling by condemning it as an act of terrorism. Indian government sources say that Musharraf called Vajpayee not on his own but because of prodding by the US and Britain. Government officials feel that though the words had to be wrenched out of Musharraf, it's an indication that in the future his bombs-and-bullets Kashmir campaign might be challenged.

Pointing to the new political reality, these officials recall that after the Agra summit, Musharraf organised an extraordinary press conference to declare that what was happening in j&k was a "freedom struggle". It would be difficult to sustain that line now and officials admit that this could have a sobering effect on Pakistan.

The Srinagar secretariat attack was the turning point. Vajpayee declared his patience was wearing thin, indicating that he might be contemplating alternative policy options. Foreign minister Jaswant Singh was in Washington then and managed unfettered access to President Bush, vice-president Richard Cheney, defence secretary Donald Rumsfeld, state secretary Powell as well as the National Security Advisor Condoleeza Rice, days after Brajesh Mishra had met some of them. These are people preoccupied with Afghanistan right now and even in normal circumstances difficult to access. Sources say Singh used the opportunity to lay out India's concerns. Although both Vajpayee and Singh have since said that hot pursuit is not being considered, another terrorist attack would certainly make it hard for both to continue to sit on their hands.

Government sources point out that this was precisely the position Israel found itself in during the Gulf War when Saddam Hussein directed Scud missiles at Tel Aviv and the US persuaded Israel not to go pro-active. If India were to undertake a military recourse to address its national security concerns, the US thinks it would hugely complicate its current efforts in Afghanistan. It is thus understood that as a measure of Washington's commitment to address Indian concerns, Masood Azhar's Jaish-e-Mohammed will shortly be put on the Office of Foreign Office Assets Control (ofac) list, which requires less of a legal process to make the determination of groups which commit terrorist acts than the Foreign Terrorist Organization (fto) list of the state department.