All cylinders at full blast, Team India now needs to do it for Dhoni 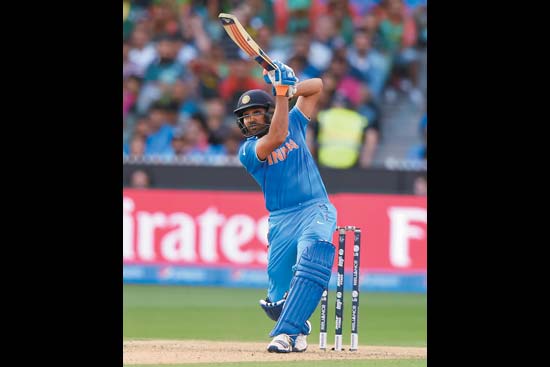 Before the start of India’s quarterfinal against Bangladesh, skipper Mahendra Singh Dhoni was asked where he felt the team needed to improve. Dhoni, never shy of handing out criticism where it is due—on recent tours he has put his finger on the fielding and the medium pace bowling—was circumspect. Perhaps not willing to jinx it by saying there were no weaknesses, thank you very much, he chose to speak of hard work, planning and all those wonderful cliches that bring such conversations alive.

For Indian cricket, that is a good sign. The captain is feeling good about himself and his team. The camera also caught him smiling; vie­wers had forgotten what a charming smile he has. Unlike in 2011, when pla­yers, fans, media spoke about win­ning it for Sachin Tendulkar, there is no such clamour now. But if India need a focal point, Dhoni is the obvious candidate. He has been India’s Mr Cricket and one of the greats in the shorter game. And it is difficult to see Dhoni play the 2019 World Cup, although he will be only 38 then.

Dhoni’s reticence when interviewed at the toss was understandable. It is better to spew platitudes than to sug­­gest overconfidence. But the fact is, this Indian team had got its act tog­ether early in the Cup in a way not even the one that won the title four years ago had. They have a week’s rest before the semifinal, and somehow that break might be crucial.

Do you switch off and reconnect later (a strategy the Indians have used well in the course of this World Cup)? Do you get lost in the data and possibilities that the coaching team provides? Can a team which—unlike England—has shown no signs of paralysis by analysis allow information to overwhelm it? As in politics, a week is a long time in cricket.

The QF allowed India to tick one of the few boxes that had remained blank: the form and impact of Rohit Sharma. Sharma’s century was proof that elegant, almost effortless style had not entirely been overtaken by the heave-and-hit batsmanship that is now a feature of the shorter game. There is room for the touch artist, the gentle persuader.

The openers are in form, and lower down, Ravindra Jadeja, crucial at number seven, seems to have worked himself into form too. As fielder and spinner, he has an important role to play in the next phase.

India have hardly put a foot wrong so far. Their fielding has been brilliant, helped by the fact that medium pacers Mohammed Shami and Umesh Yadav are sound and energetic. Ravi Ashwin has taken wickets in the middle overs, and all the top batsmen have made runs. Since the techniques of T20 cricket have been adapted to the longer game, strike rates have gone up dramatically. At least four players—Shikhar Dhawan, Virat Kohli, Sur­esh Raina, Dhoni—have strike rates hovering around the 90 mark.

This is a team where everyone knows his job, his place in the overall scheme of things. The credit for this should probably go to Ravi Shastri, the team director, who somehow got the players to shake off the staleness that comes of a long tour with Test matches, a tri-series and then a long World Cup. Coaches Sanjay Bangar and Bharati Arun deserve credit for having brought India this far.

New Zealand and India have looked the best teams so far; Brendon McCullum and company have a point to prove in a country where rugby is king. A World Cup triumph could change the face of the game there. For India, it will be a wonderful gift for their captain and inspiration of recent years. But there are a couple of serious left-arm fast bowlers to deal with first.