A Storm With Tusks

Slow relief work after Cyclone Gaja made the afflicted erupt 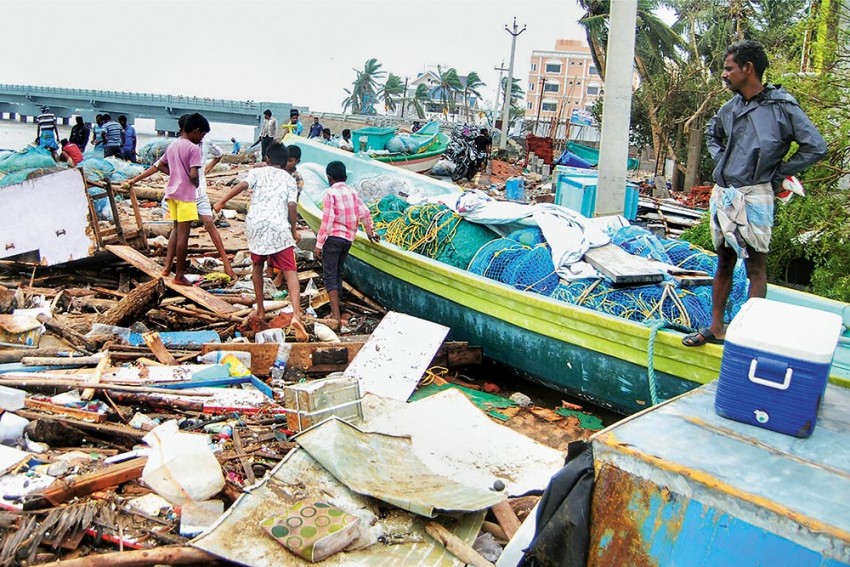 Rubble Coast
A view of the damage at Velankanni, Nagapattinam district
Photograph by PTI
G.C. Shekhar November 21, 2018 00:00 IST A Storm With Tusks 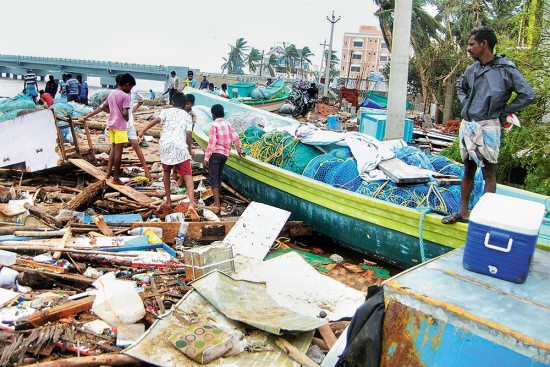 Formed early this month off the coast of Thailand as a low pressure area, Cyclone Gaja gathered ferocity on its way to Tamil Nadu. When it hit the state on November 15-16, it ravaged four districts.

Initial reports suggested the state had prepared well for the storm, with the aff­ected being evacuated to safe locations. The casualty count too was low during this time. But as the days went by, the number of dead crossed 40. “Only when we reached the interior areas and villages of the districts did we see the extent of the damage. More than 90,000 tress had been uprooted, blocking many roads. Our relief staff could reach villages only after clearing some of them,” said a senior IAS officer supervising relief measures.

The delay in relief reaching interior areas meant those regions were languishing without power, water and food for three days. By the time the first convoy of officials drove through the badly affected Kotha­mangalam Taluk in Pudukottai district, the people there had become so frustrated and angry that they set ablaze five jeeps from the convoy for turning up so late. Even vehicles of state ministers were attacked and some ministers were gheraoed as public ire grew in the four districts of Pudukottai, Naga­pattinam, Thiruvarur and Thanjavur.

“The damage cannot be repaired in a couple of days. More than 60,000 electric poles had been felled by the 100 km per hour gale winds, 1.17 lakh houses have been damaged and 88,102 hectares of cultivated land has been flooded and crops destroyed. And this is only the initial assessment,” said revenue minister R.B. Uday­akumar. He also mentioned the rehabilitation challenges such a calamity entails. “In a city or town, the electric poles are on the street side, so accessing them is easier. But to reach the poles uprooted on agricultural land, you have to go through slushy fields, which is difficult and time consuming.”

Gaja is the third cyclone to ravage the state since December 2016, co-incidentally, after the AIADMK returned to power. The government response to the Vardha cyclone that hit Chennai in December 2016, a week after former CM Jayalalitha’s death, was swift and effective. Normalcy was restored within four days. But the next cyclone, Ockhi, that hit the state on December 2017, graduated from a depression to a severe cyclone in just two days, taking an uncharted path. It caught the India Meteorological Department (IMD) by surprise. With very little warning of the cyclone, 93 fisher folk lost their lives in Tamil Nadu and Kerala, mostly mid sea.

The IMD had tracked Gaja’s path ­correctly, giving the administration time to prepare adequately. But the cyclone took an unexpected turn—it did not weaken on landfall. In the past, the ­impact of cyc­lones was felt only in the coastal districts. This is the first time that interior districts have been paralysed. “It travelled as a depression across Kerala and exited at the Arabian Sea and has emerged into a cyclone heading ­towards Somalia. It is proving to be a persistent system,” said weatherman V. Balachandran.

The farming community of the delta region—in which the affected districts lie— is a distressed lot. They were hoping for a near normal crop after good inflows in the Kaveri this season, but Gaja has flattened their hopes. Senior IAS officer Gagandeep Singh, an expert in rel­ief ope­rations, had recommended that, at least in coastal districts, power lines should be laid only underground so that supply does not get affected by cyclones which are regular bet­ween October and January.

“The officers are well meaning and want to find long-term solutions but the ministers compromise the quality of work by eyeing only their cut from such contracts. Even now, two ministers are squabbling on which contractor should supply the standby power generators in the affected areas,” said a farm leader.