A Stickler For Values 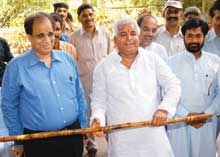 Laloo Prasad Yadav has again dipped into his repertoire of rustic symbols—this time to fight communalism. His choice of weapon against Praveen Togadia’s trishul is the old faithful, lathi—which, for the RJD chief, recalls Mahatma Gandhi who "drove the British out of the country with the humble danda". He even gave tips at a public meeting on how to wield the stick. "Hit below the knee. Even if you’re caught, you’ll be easily out on bail. If you knock someone on the head, you’ll land in jail," he said.

The remarks have naturally riled the state BJP, which wants to see a parity drawn with the trishul—legally, that is. Bihar unit chief Sushil Modi has asked the governor for a ban on lathis at public meetings. But Laloo is unperturbed. His take: the lathi is integral to the daily life of the rural farmer. He has another escape clause: the lathi is not to be used to attack Hindutvaites, only to defend the poor and the minorities. But the target was implied in this spot of advice he had for all who are hounded, even journalists: "A well-oiled lathi will stand by you in times of trouble...if you are targeted by anti-socials in the course of your duties."

Laloo has plans to organise a series of lathi ‘raillas’ (a ‘masculine’ rally in Laloospeak), which in his vision is to culminate in the downfall of the ‘communal BJP’. The ‘raillas’ will also be a mass protest against the US invasion of Iraq. Most parties, including the CPI, have voiced unease over this. But Laloo is confident his campaign against communalism will take wings on Gandhi’s staff, a bit beefed up.