Karunanidhi makes it clear who he favours 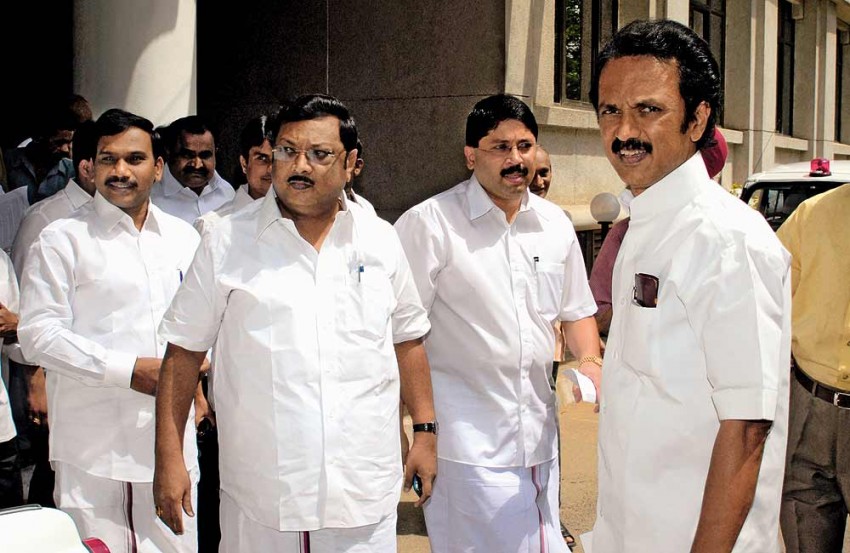 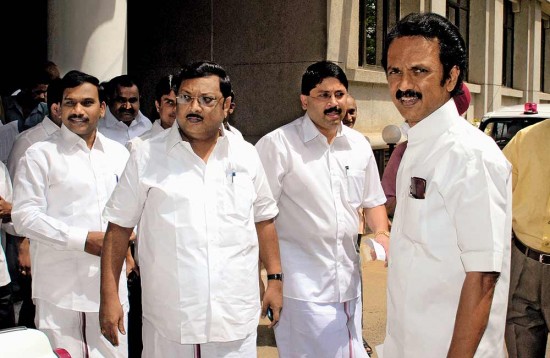 BETWEEN M.K. Stalin, the political heir to the DMK throne, and Kanimozhi, the cultural heir, is there any room for Union minister and Madurai strongman M.K. Azhagiri in the party hierarchy? After DMK patriarch M. Karunanidhi announced that Stalin would be his successor, in the least equivocating manner that he could afford, it was on every mind: the future tumult awaiting Tamil Nadu politics. There was a latent sense of urgency. Almost as if everyone expected the two brothers’ legions to break into rioting in the streets and marketplaces of Chennai and Madurai with stones and sticks, soda bottles, machetes and firebombs. Nothing like that has happened yet, though one assumes there is always space in the script for some action.

Azhagiri’s response to the announcement of his sibling-rival’s succession was pithy: “dmk is not a religious math, where successors are anointed.” It’s a toss-back reference to something similar Karunanidhi had once said when asked about succession, taking a dig at the Brahminical traditions of the Shankara Math. It is a clever reminder, too, of the party’s atheist-rationalist ideology. The strongman is in no mood to sit quietly. After all, Stalin has been projected as the No. 2 long enough for animosity to build up. “It’s a power struggle in a dynastic family—very much like in other political families, where succession struggles are not uncommon,” says M.S.S. Pandian, an academician.

It was while addressing some 600 Pattali Makkal Katchi (pmk) workers who’d crossed over to the DMK that Karunanidhi dropped the first hint, saying his son Stalin would “continue  to work for the uplift of Dalits just as I have and his commitment to their cause is beyond question”. Later, addressing DMK workers, he got as specific as he could within his favoured mode of speaking through riddle-like utterances, “If, as a party worker, I’m asked to nominate a man, I would nominate Stalin.”

But Azhagiri is a street fighter. For every word of his father, insiders say, he has the muscle to counter. Says S. Srinivasan, news head of a TV channel, “Karunanidhi’s comment clarified Stalin is the chosen one. The only reason it did not have a ripple effect is because, for all practical purposes, Karunanidhi is still there.” Politically affiliated channels like Sun TV and Kalaignar TV analysed the statement and extrapolated upon it at length. Because it’s still a matter of speculation what might happen in the party after Karunanidhi.

Memories of the vicious attack on Dinakaran (a publication owned by the Marans) six years ago, after the paper published a survey on the succession plans in the first family of Tamil Nadu, haven’t faded. Across the state, there are bands of young DMK workers who swear by either Azhagiri or Stalin. Like the brothers, they are driven and fired up by fierce loyalties. The succession of Stalin, though it was a foregone conclusion, is not going to be easy. For Azhagiri’s supporters have a history of following his brief with violent action.

There’s also the belief that the patriarch is not retiring yet. He continues to wield absolute power in party and family; how he carved up the territory for his two sons is how things still stand. Azhagiri holds sway in Madurai, Teni and Ramanathapuram; Stalin has a strong base in Chennai, but also has wider appeal across the state. Also, he knows he is the chosen one and therefore acts from that confidence. Perhaps, to put all doubt to rest, Karunanidhi could have said, in the ambiguity he knows how to wield so well: “Let the best man win.” While that may have resulted in a semblance of intra-party democracy, it could still not have forestalled the present confusion.

Flux Being the Only Constant