The Modi avalanche crushes everything in sight—even rivals in the saffron camp. Will his wagon roll into Delhi 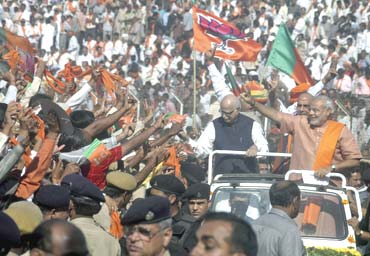 In coalition politics, there is one cardinal rule. As the popular base of those who rule from Delhi shrinks, state elections have an impact far beyond geographical boundaries. Narendra Modi's thumping win in Gujarat is arguably one of 2007's most important political signposts. The poll results have not merely reinvigorated a chief minister everyone thought vulnerable, his political persona may now be too larger-than-life to be contained within Gujarat.

His shadow will now loom over every political strategy devised in 2008 in the run-up to the general polls. Will a demoralised Congress, whose carefully preserved mascots Sonia and Rahul Gandhi were mercurially thwarted by a mere state leader, now lose heart and with it the political momentum? Will Congress anxieties over the Muslim vote mount, compel the party to lose face, ditch the Indo-US N-deal? Will the grand old party have the nerve to take "secular" positions now, at the risk of handing him issues on a platter? Clearly, Modi has added to the Congress identity crisis.

But equally, he's unnerved his own party with the sheer monstrous margin of his victory. L.K. Advani may have hurriedly been declared the BJP's prime ministerial candidate. But Modi is today, without doubt, the first among equals, the biggest crowdpuller, the main financier and an across-caste mass leader who stands head and shoulders above his colleagues in the BJP.

There had been speculation that if he won comfortably in Gujarat, Modi would make the giant leap from Gandhinagar to New Delhi. But he is a man who works to a plan—his controversial, riot-tainted history makes it imperative for the CM to hold on to his base in Gujarat. The 57-year-old Modi must stand on firm ground even as he tests the waters across the country. Sources close to Modi say he is comfortable working with Advani. After all, the Leader of the Opposition is 80 and the next general election could possibly be his last. Modi has been advised to prepare for the next electoral bout, after Advani has had his chance.

Meanwhile, the two men also share common ground in opposing the RSS's micro-management and VHP's temper tantrums. Characteristically, Modi has simply clobbered the Sangh parivar in Gujarat; Advani, much more of a gentleman, has made numerous public speeches against the RSS influence on the BJP. What is certain is that a Modi-Advani dispensation will see the RSS clout wane. Many Sangh volunteers in the BJP will simply recede into their shakhas. 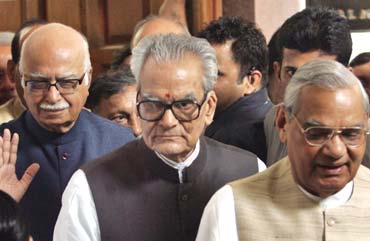 Another round? Advani, then V-P Shekhawat and Vajpayee during the NDA’s heyday

That creates a genuine crisis for party president Rajnath Singh, who derives all his authority from the Sangh. Outlook has exclusive information that Advani has already mooted a plan to make former V-P Bhairon Singh Shekhawat NDA convenor in place of George Fernandes, who too is headed down the A.B. Vajpayee path of retirement. Both Shekhawat and Rajnath are Thakurs, one reason why the BJP chief can be unenthusiastic about any parallel rising—it can only increase the sense of his own expendability.

Modi, Arun Jaitley and Advani are currently on top and all of them have little regard for Rajnath. Since the Gujarat verdict, Rajnath has been undermined at every step. Advani has already indicated that the strategy and publicity campaign for the next Lok Sabha election will be handled by Jaitley. What's more, the main fundraisers of the BJP besides Modi are Jaitley, and to a lesser extent, Venkaiah Naidu. To add insult to injury, Modi has made it clear that he would not like Rajnath to handle party finances.

Indeed, Modi would actually prefer to remove Rajnath from the party president's post. The obvious contenders would then be Sushma Swaraj and Arun Jaitley. But Sushma burnt her bridges with Modi during the recent campaign when she refused to return to Gujarat following reports that she had failed to attract crowds. Jaitley, on the other hand, seemed content to play backroom boy. Clearly, he would be Modi's preferred candidate for president. Yet, Rajnath may survive if he abandons all personal ambitions and toes the Modi line. In that event, it may actually suit Modi to have a weak, ineffective president in Delhi while he calls the shots from Gandhinagar. 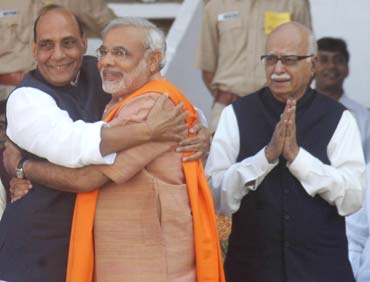 The question now is, are there limits to Modi's power? Those who despise the man take comfort from the fact that the BJP cannot get allies with Modi as leader. Among the NDA constituents, the JD(U) would certainly like to keep a safe distance from Modi. The party actually won a seat in the Gujarat assembly but did not have an understanding with Modi's BJP. Bihar chief minister Nitish Kumar went to campaign in Gujarat but did not meet Modi. On the contrary, he slammed Modi for raking up the Sohrabuddin murder. Ask him a question about Narendra Modi and he smiles, "We have our own Modi (deputy CM Sushil Modi)." JD(U) president Sharad Yadav too says "we have no problem accepting Advani as NDA leader. But we see Modi as an aberration."

Among the NDA allies, the Shiv Sena is in step with Modi. The Akali Dal did not send anyone for Modi's swearing-in, but Sukhbir Badal, the Shiromani Akali Dal working president, did say, "We are happy that Modi won on a development agenda. He is welcome anytime in Punjab as he is a member of our alliance partner, the BJP. It would have been different if he had won because of communal politics but he stuck to development." Naveen Patnaik's BJD too stayed away but Modi would not be an issue for the BJD to ditch the NDA.

A quick scan of the country reveals that Moditva will not click in the Hindi heartland. During the UP elections in April/May 2007, Modi did not draw any crowds at the couple of meetings he addressed. Similarly, although Arun Jaitley was in charge of Bihar, Modi was never invited to campaign in the state when Laloo Yadav was trounced by the JD(U)-BJP in November 2005. But as the image becomes larger than life, Modi will be a very effective crowdpuller in Maharashtra and Karnataka—both states where there is a strong communal subtext to the BJP's politics.

He could also be potent in the Malwa region of Madhya Pradesh, extending from Indore to the tribal belt of Jhabua and Ratlam bordering Gujarat. Again, this belt includes Dhar where there is simmering Hindu-Muslim tension, and small skirmishes take place over issues such as mixed marriages. In other words, the terrain is tailor-made for Modi's histrionics. Moreover, party sources feel Shivraj Chauhan is a weak CM and would be looking for a miracle. Sources say he will ask Modi to campaign extensively in Madhya Pradesh. The Gujarat CM will be a huge draw in this swathe of India, extending from Gujarat, parts of Maharashtra, Madhya Pradesh, Chhattisgarh to Jharkhand, where people are deeply religious and Christian missionaries are active in pockets.

In exactly a year, December '08, three BJP-ruled states—MP, Chhattisgarh and Rajasthan go to the polls. Rajasthan CM Vasundhararaje will resent being overshadowed by Modi in the BJP CMs pecking order. She has apparently learnt a few lessons from him and is planning to make the poll about her personality, say party insiders. But does she have the administrative skills or mass appeal to repeat the Modi feat in Rajasthan? In Chhattisgarh and MP, the unimpressive BJP leaderships will be appealing to Modi for help.

As for the party's prime ministerial face, Advani simply does not draw or sway the crowds anymore. He may be the best man to do a holding operation. But as state and general elections take place, it will become embarrassingly clear that it's Modi who draws the rock star-like packed houses.

In the BJP, Vajpayee has been the only BJP leader who was always more popular than the party. But then, he was always the epitome of Brahmin respectability. Now there's Modi and he has no such refinement (although he too has taken to writing poetry). But the man is a natural born politician whose moment will come if the national mood is consumed by Hindu-Muslim conflict, terror and the secular-communal discourse.

If that happens and Modi does indeed prove to be a winner outside Gujarat, then those who shun him today will not hesitate to shake his hand.