A Season Of High Jinks

If there's one thing Indian MPs excel at, it's primetime theatrics 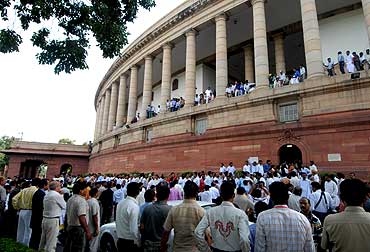 outlookindia.com
-0001-11-30T00:00:00+0553
In the chaos and din of the confidence vote being passed in favour of the Manmohan Singh Government and wads of cash being flung in the sanctum sanctorum of the Lok Sabha, one tiny detail was glossed over. American diplomats sat in the visitors’ gallery and watched the two-day proceedings of the Indian Parliament with understandable interest. At the end of the two-day session, the US ambassador to India David Mulford expressed his satisfaction with India coming closer to implementing the nuclear deal. The White House too gave the Indian PM a pat on the back. Spokeswoman Dana Perino praised Manmohan Singh for "soldiering on".

One can only speculate what the Americans who sat through the debate made of the spectacle of Indian democracy. Presumably, even with headphones on, the nuances of the rustic Hindi humour of our honourable MPs would have been lost. But did that really matter? The superpower had every reason to be pleased. As the world’s most powerful democracy watched, the people’s representatives of the world’s largest democracy made a complete mockery of the system and reduced Parliament to a circus. One can be sure that when the 123 agreement comes up for vote in the US Congress it will be dealt with some gravitas!

But we Indians enjoy a nautanki. There was emotion, drama, suspense and sleaze packed into the two-day session. For good measure there were the Dons too, such as Mohammad Shahabuddin of Siwan, striding up and down the lobby of the House, none the worse for a long spell in jail that seems unlikely to end in the forseeable future. Another Bihari don, Prabhunath Singh of the JD(U), made one of the better and more cogent speeches opposing the motion.

A third Bihari literally brought the House down. In terms of sheer talent and "entertainment value", Laloo Yadav was streets ahead of any other speaker. The political swipes at the Opposition were on the mark without hitting under the belt. He swung his arms up and down as if at a public rally and spoke impromptu without a prepared text. There did appear to be a torn scrap of paper from a notepad in front of him, but a source claimed he had jotted down some songs in case there was a break in his natural flow. True he had little to say about the nuclear deal but he did score his political points.

Besides the Laloo show, there was a constant sideshow and slanging match between the two great rivals of Uttar Pradesh, the SP and BSP. Whenever there was a lull, the SP and BSP MPs would liven the proceeding by almost coming to blows, hurling accusations at each other and rushing to the well of the House demanding an adjournment. The BSP’s Akbar Ahmad Dumpy actually managed to force a short break.

In between such riveting performances there was also an apparent debate on the nuclear deal where some Union ministers like Kapil Sibal and P. Chidambaram put forward a well-prepared argument. Since most of the BJP’s star speakers are in the Rajya Sabha, the response was poor. Indeed, the best speaker from the saffon ranks was their sole Mulim MP, Shahnawaz Hussain, another Bihari!

The only "content" of substance the party of gods displayed was in actual currency notes, when three of its MPs produced bags of cash they claimed were given to them to vote in favour of the government. But the fact that the Opposition had to fling currency notes to make its point is in itself a revealing statement on the standards of parliamentry democracy. A cynical scribe later commented: "We should ensure that in future all cash is produced in Parliament during banking hours." As this correspondent left Parliament on a day of such high drama, a long-time parliamentary official remarked wearily: "Why are you surpried madam? All are thieves here."