A Run On Banks 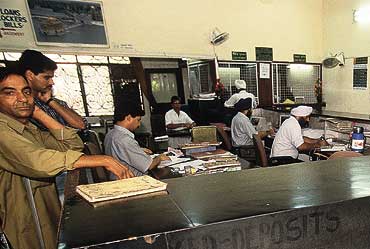 outlookindia.com
-0001-11-30T00:00:00+0553
When the government rammed through a voluntary retirement scheme (vrs) in public sector banks in early 2001, several experts had feared that the scheme may boomerang on these resource-scarce, slothful organisations. Only a few months on, the stress is showing in most banks as they desperately try to cope with the hard life after vrs.

While bank managements are trying to tackle the sudden shortage of finance and manpower, employees are faced with an uncertain future. Even those who took the golden handshake are rechecking the fine print in their retirement documents, and some are still awaiting part of the bonanza.

Most public sector banks have been working with slim bottomlines—for some, even these small margins would disappear were one to take into account the non-performing assets (NPAS, bad debts in simple English). True, some banks have experienced a drop in operating costs after vrs but overall efficiency levels and output have been hit. The ex-gratia outgo on vrs has taken the bottom out of their reserves. In fact, the total cash outgo of all banks on account of vrs, at around Rs 7,500 crore, is capable of wiping out the net profits of most banks.

Says Indian Banks' Association chairman and Punjab National Bank cmd S.S. Kohli: "The cash outgo is substantial. Of 26 banks, only 10 have paid the ex-gratia in cash. The others paid 50 per cent in cash and the rest in bonds and fixed deposits. The total estimated cost of ex-gratia of these 26 banks is Rs 6,740 crore." However, Kohli valiantly maintains that the cash outgo won't affect the public sector banks materially.

But the evidence is flowing in thick and fast. Even profit-making banks have found profits dipping on account of the ex-gratia payments. Take for example the profit-making Oriental Bank of Commerce, whose vrs burden was less than other banks', yet its net profit slumped by 27 per cent. Giant State Bank of India (sbi), with a vrs outgo of close to Rs 1,500 crore, faces the same fate, having decided to pay its entire vrs liability in cash and having provisionally set aside around Rs 1,200 crore for this purpose. With the average compensation of those opting for vrs ranging between Rs 9 lakh and Rs 20 lakh, the vrs burden in the remaining banks works out to anything between Rs 150 crore and Rs 300 crore each.

The state of those doing relatively bad is worse. Especially that of three 'weak' banks—United Commercial Bank, United Bank of India and Indian Bank. Says All India Bank Employees Association (aibea) general secretary Rama Nand: "These three banks are being made to pay a vrs bill of close to Rs 1,000 crore when they haven't even paid wage arrears of Rs 400 crore, due since 1997."

Add to this the problem of npas. According to finance ministry estimates, the npa level in banks has risen to over Rs 50,000 crore this year, or a whopping 2.5 per cent of the gdp, making it totally unsustainable. Added on to the fiscal deficit—as global agencies routinely do when they assess India's financial solvency—it puts the government in a huge fix.

If finances have given the banks a standing headache, the loss of manpower is a bigger problem to grapple with at the moment. The sudden departure of many senior staffers has led to a vacuum in many banking functions as well as left a void in crucial decision-making. According to figures culled by aibea, a good 28 per cent of those taking voluntary retirement are senior people of officer rank, while another 15 per cent are skilled non-officers.And when the total number of people having left through the vrs route adds up to a massive 8.6 lakh, according to aibea figures, one can imagine the extent of the manpower problem.

In sbi, over 35,380 employees—including 19,295 officers—opted for the golden handshake but the response of the targeted group—junior level employees—did not match expectations. The sbi authorities allowed 21,329 people to go, which included 7,158 officers. Some of the senior officers have already got new jobs because of their expertise, thus having the best of both worlds. But sbi's operational efficiency has been badly hit.

Says Nand: "The public sector banks stood for 'mass banking' as against 'class banking' offered by the private sector. But now, even mass banking is becoming a fantasy because the banks have no staff to service the masses." His charge may be caustic but is true. Several banks have shut branches due to shortage of staff. Some of them have closed down a few 24-hour customer service branches. Some have closed down zonal offices and changed their entire working system. Pressed by the manpower shortage, many banks have also resorted to employing outside agencies for work that was traditionally the exclusive domain of the banks. This includes money management, clearing services and retail services.

Some branches have become almost non-operational. Especially in the northeast, where public sector banks are a favourite target of extremists for extortion and intrepid officers have had to pay the price. Tired of living with strife and tension, several officers in bank branches in Manipur as well as in Nagaland have opted for vrs. There's also another side to the story. As bankmen point out, if anything, the response to vrs exposed the level of frustration prevailing among employees. "The government might have wanted to believe that only a select group would opt for it but the massive response across the ranks came as a major shock. What it really means is that most bank employees are a dissatisfied, even frustrated, lot and that management over the years has been very poor indeed," says a Centurion Bank official.

But many experts feel that the vrs exercise was a necessary evil that the banks needed to go ahead with if only to infuse the Indian banking system with the competitive pressures that are there in other countries. And the post-vrs situation could only be the beginning. Says Gautam Raj of management consultants A.T. Kearney: "Part of this vrs activity is aimed at identifying core resources, something that should have been done earlier. The banks had no alternative. Indian banks have lots of people, paper and staff but very little space for customers. A paradigm shift was required. To do things efficiently and in a cost-effective manner, technology is needed, not people."

But the bank employees forced to bear the brunt of this staff shortage are upset. Says Ashok Dutta of the sbi Staff Association: "The management introduced vrs without any gameplan. Just how many people were excess? In many branches now there is a genuine shortage of staff and customers are complaining. Nationwide, we are calling for some crucial re-employment. The authorities have appointed a study team to go into our demands but the report that's expected any day now will probably be an eyewash." Some banks are even promoting the leftover staff as a result of which clerks and non-officers have become officers overnight by default. This is bound to reflect on the quality of working in the banks.

At the end of the grand exercise, there seem to be few winners. Even some of those who have left have failed to make it big after vrs. Says a regional secretary of the ubi union who opted for vrs: "There are a lot of discrepancies. According to rules, employees having served the bank for 28 years were to be given five years' notional value to make them eligible for retirement benefits. That's not being done. Pension is being paid on the old scale instead of the new one, arrears of wage revision have not been paid but loan repayments are being deducted from the vrs payouts."

Complains an Indian Overseas Bank employee: "Those who wanted to start new ventures of their own have not been able to do so because their money is locked up in the banks. Those who didn't are now scared of inconvenient transfers and other trouble. The fear psychosis continues." Some senior officers who joined private organisations are not exactly singing. Says one: "After working at a bank for a decade or more, it isn't easy to adapt to the new demands and conditions."

The retired officers have now formed the All India vrs Optee and Rejectee Association to fight for their cause. The association has filed over 10 public interest litigation cases against the authorities to highlight some grievances and anomalies implicit in and resulting from the official vrs policy.

Clearly, the immediate aftermath of the vrs process has been quite gory. But if this bloodletting can cure the patient that is public sector banking, the pain could just possibly have been worth it.

With Ashis K. Biswas in Calcutta