Cleaning Ganga means restoring the river, the people, the economy 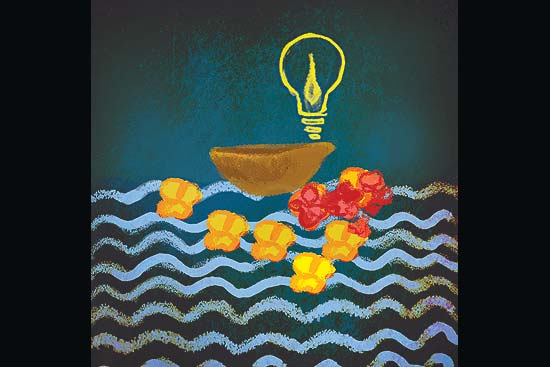 Is the Ganga a revered river because it is economically important or is it economically important because it is revered? This is a crucial question, wrapped in philosophy and enveloped in the mists of time, and yet one that has a contemporary resonance. The Ganga’s economic and social impact on India and indeed the Indian subcontinent is what warrants its cleaning, renewal and optimal utilisation as a river, a water resource, a waterway, natural capital as it were, for the 500 million Indians—one in three of all citizens—who live in the Ganga basin.

The basin covers 8,60,000 square kilometres (twice the size of Germany) in 11 of India’s 29 states. Forty per cent of the country’s GDP is generated here. Uttar Pradesh, Bihar and West Bengal are not just part of the Ganga basin, but sites of India’s dee­pest developmental challenges. Some 200 million Indians in the Ganga basin live in poverty. Add Ban­gladesh and Nepal, and the numbers worsen.

As such, when one speaks of the Ganga’s rejuvenation—as anticipated by the Narendra Modi government’s Namami Gange initiative, which in turn widens the scope of the UPA government’s National Mission for Clean Ganga—one is not merely discussing a superficial cleansing or pandering to religiosity. The Ganga is a cross-cutting phenomenon. It has consequences for fields as far apart as urbanisation, public health and job creation.

For instance, Namami Gange envisages the redevelopment of 118 towns and cities. Intelligently done, this could be conflated with the Smart Cities programme, which aims to build urban clusters that make efficient use of energy, water and waste management technology. Separately, as part of Swachh Bharat, there is a proposal to make 1,649 gram pan­chayats/villages in the basin open-defe­cation free. It will improve health and general living conditions as well as prevent human waste polluting the river.

To consider the ‘cleaning’ of the Ganga as a narrow objective is self-defeating. In fact, there is need for clarity on what a clean river means. What are the benchmarks we must set? The Ganga is a sediments-laden river, flowing down from a comparatively young mountain range, the Himalayas. As such, even when cleaned up, it is unlikely to ‘look’ as clean as say a European river where one can literally see the bottom.

Do we measure a clean Ganga then not in terms of visual appeal but impact of water quality and what removing pollution means for fish that live in the river? How does one tabulate the estimated half-a-million deaths each year due to water-borne diseases related to the Ganga? Surely this alone would make expense to clean the river worth it?

Over half the water used in India is from the Ganga basin, 90 per cent of it for irrigated agriculture. Yet, efficiency of use is below 40 per cent. This means much of the water is wasted, though some of it might be used for domestic purposes further down and some simply flows back. Just how much is unclear. There is very little rec­orded data. A scientific study of this alone can revolutionise water use in northern India, make for much more informed social and economic choices, contribute to modernising agriculture, and restore the vitality of the river.

There is also the compelling prospect of reviving the Ganga waterway. The cleaning of the Rhine, which beg­ins in the Swiss Alps and flows through 1,200 km of Europe, was carried out sim­u­l­taneously with its development as an international waterway. This process took decades but left the Rhine community better off. Today waterways in Ger­many and the Netherlands carry 40 per cent of the freight. In India, they carry 0.5 per cent.

The 1,630-km National Waterway-1 (NW-1) runs down the Ganga, from Haldia to Allahabad. Plans for NW-1 include building a terminal in Varanasi. This will be 700 metres from National Highway-2 (NH-2, part of the old Grand Trunk Road). About five km away is a small railway station that can marry the terminal to the proposed Eastern Freight Corridor (EFC), extending from Ludhiana to Dankuni (near Calcutta).

Linking the EFC and NH-2 to NW-1—with cargo moving from river to land to rail seamlessly and interruption-free—can create an infrastructure marvel across northern and eastern India. If the Ganga waterway is made navigable to facilitate large vessels carrying 1,500-1,800 ton­nes, each such vessel could replace 100 trucks or a third of a goods train.

That is the potential of Namami Gange. Any idea that it’s merely about Hindu sentiment is seriously flawed.

‘You Could Become The Governor Of WB’