A Riot Of Commemorating

The mutiny as seen through literature, folksong, missives and a canonical episode 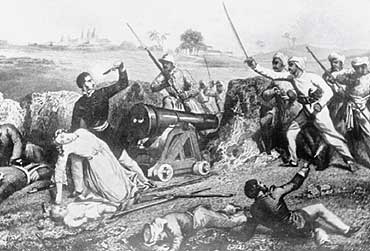 All nations, old and new, claim their antiquity in their own ways. Nation-states—Firangi, Francisi, Amriki, or our own—find it impossible to recollect without commemorating. As national markers, commemorations allow for the passage of identity-bearing citizens through hallowed time. During such hooplas, both the Republic and the public make demands for historical ‘item numbers’.

But how does one convey the tumult that was 1857: mutiny and insurgency, plebeian disorder and state terror, atavistic proclamations and radical stirrings, within the contours of the India of today? How does one narrate the ‘Ghadar’, when the voice of the native rebel (of sundry accents) has been strangled into oblivion? Till very recently, most accounts of 1857, both learned and popular, have not been too bothered by the paucity of ‘native sources’. The records of the past—as also in the present—are generated and kept by victors, or rulers, even if we elect them ourselves.

Rebellion 1857, published 50 years ago, and now reissued, represents the best of popular Marxist scholarship. A handy compendium which highlights the impress of the Upsurge on Urdu literature and folk songs, it underscores the contribution of peasants, artisans and ‘Muslim revivalists’ to the making of the Ghadar. It has a detailed piece on the making of the rebellion, especially in Delhi, where Bahadur Shah Zafar was a prisoner of the sepoys, and of history. The irony of featuring a reclining Zafar as a huge puppet, perched atop the Red Fort, stirring daintily in response to the pull of strings, was perhaps deliberately invoked in the recent mega show in the capital! An illuminating essay on Ghalib’s view of the loss and recapture of Delhi, and another on the folk songs of 1857 present the non-combatants’ perceptions of the events.

The Penguin 1857 Reader is a fresh collection, where the documents of the time, and extracts from a spate of British ‘Mutiny Narratives’ that followed, speak to us directly. We have here some interesting letters, impressions, recollections and analyses of actors and contemporary and near-contemporary writers. The pre-revolt missives sent by Laxmibai to British officers, the report on the circulation of chapatis by Delhi policemen, the plight of English officers and families, and accounts of British reprisals. There are extracts from the trial of Bahadur Shah Zafar, Queen Victoria’s proclamation offering amnesty to all save those charged with the killing of ‘British subjects’, translations of folk songs, newsreports from Europe and US, and the representation of 1857 in English fiction. Brief introductions provide the context.

Nayar’s companion volume, The Great Uprising, has a much tighter storyline. Well-researched, it provides a potted history of British rule in India, settling down to an innovative retelling of the events in the "many theatres of the war". To recount the entire story of ‘The Sepoy War’, cluttered as it is with disparately connected events, without letting the reader’s attention waver is a major achievement. The downside is the virtual absence in Nayar’s account of the generalised uprising, especially in the Ganga valley. He links 1857 rather coyly with Gandhian nationalism, thus muddying a fine copybook unnecessarily.

Rudrangshu Mukherjee’s Spectre of Violence makes no such leap of imagination. He focuses instead on a canonical episode of rebel violence: the massacre of besieged and depleted English combatants and women and children at Satichaura Ghat, and subsequently at the enclosed Bibighar. In a finely tuned analysis, Mukherjee dares to look this violence—and the evidence—in the face, not to hail it, but to show how the various British accounts of these events got constructed by an interplay between what was witnessed, remembered and enshrined. We have already moved away from a head count—colonialist and nationalist—in the grisly sense of that term. And entered history’s estate, where historians are often in a position to establish not just what happened in the past, but also how memory and memorialisation play on the certitude of facts.