A Riddle Of Hill And Valley

As two national parties battle it out, the faultlines that run through the northeastern state only come out sharper 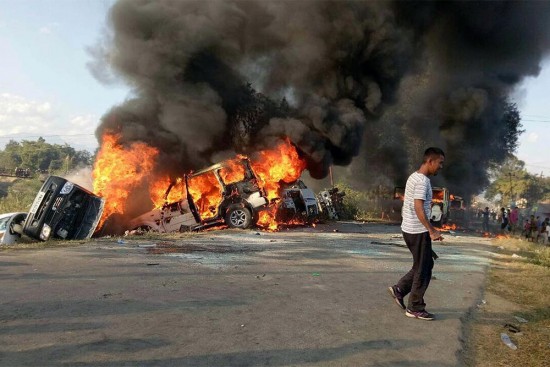 It could pass off as an unfinished village road, but for the fact that this is NH-2 and connects four states—Nagaland and Manipur in this sector. Cars zigzag up the hills and also simultaneously zigzag on the asphalt, to avoid massive craters, one nearly every 15 feet. It’s only 60-odd km from capital Imphal in the Meitei-dominated valley to the ethnic Naga-flavoured Senapati district up in the north, but the road makes it a nearly three-hour drive. Metaphors may be the last thing on a traveller’s mind, but the state of the physical link in this case really does mirror the psychological distance ­between the two zones.

Just a fortnight left to assembly polls, and Manipur’s faultlines are all too visible. An overarching signboard announ­ces the arrival at Senapati. Large, old oil tins pock-mark the road—markers of a de facto shift in administrative power. Cars must slow down to weave through. Young men from the Naga People’s Orga­nisation (NPO) mill around, glaring at you from behind bandanas that cover their faces. They are armed with sticks and stones, and cars that try to speed away do so at some risk of broken glass.