A Rich Seam Flows By

Along the Subarnarekha, villagers hold the secret of making gold 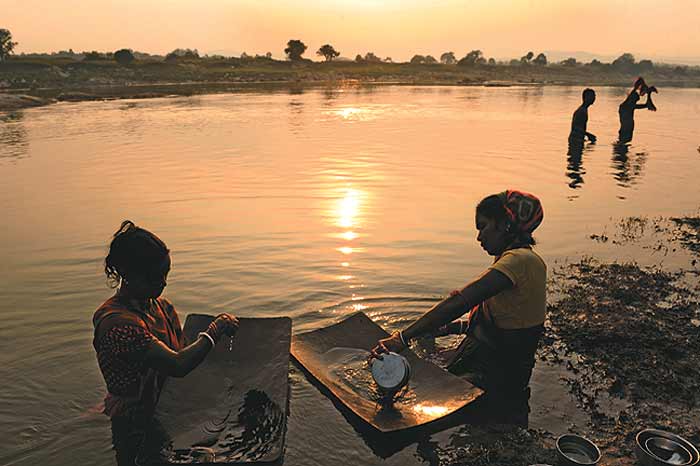 “Instead of gold, my wife brought the secret of making gold with her as dowry,” says 30-year-old Kalipada Bera, a fisherman, standing on the banks of the Subarnarekha. The river is also known by the more Sanskritised variant, Swarnarekha, which, translated into English, means the Golden Streak. Dusk is descending over the vast sandy bed of the river, now bathed in the golden hues of the setting sun. “She told me that it’s not water that flows in this river,” the fisherman continues. Then, bending down to take a fistful from the surface of the river and letting it run through his fingers, he adds almost in a whisper, “What flows in this river is molten gold. You just have to know how to convert it. She taught me how to do that.”

Bhabani Bera, Kalipada’s wife, should know. Hailing from the remote Nagri village in the jungles of Jharkhand—where the source of the Subarnarekha has been traced—she belongs to a community of tribal folk which has for generations made a living by selling gold collected from the river. Rich in minerals—not just gold, but silver, copper and uranium—the river has attracted the attention of mines and factories since the British period. There is a gold mine near Nagri, for instance, and a copper factory in Mou Bhandar, also in Jharkhand. Both of them are on the banks of the river.

In recent times, many of the big businesses have shut shop and fled. There are large numbers of abandoned buildings that previously housed mines or factories. “It has been easy for the Maoists to influence the local people here,” explains an elder of Amainagar village at the banks of the Subarnarekha, near the factory of Hindustan Copper Ltd, “because they have shown the villagers how big corporations are grabbing their lands and livelihoods and depriving them of their dues.”

Indeed, villagers are suspicious of and resistant to outsiders. “The first thing the government will do is take over the stretch of the river where there are gold deposits and deprive us of our right to the gold if they come to know that we are eking out a living from it. Then they will give it to a big corporation,” says Chambal Murmu of Mou Bhandar, where the copper factory has taken over vast stretches of land and usurped part of the river. “Yes, we know how to make gold, but we won’t tell you because it’s a secret,” Sushila Dheewar of Amainagar village reprimands us right away. The 35-year-old wife of a fisherman also belongs to the community of tribal villagers deep in the jungles who have for generations been selling gold collected from the river for a living.

Tribal women collect ‘gold liquid’, then separate the metal in a simple process. It is sold in local markets on Sundays.

Sushila’s sister Gunni says sharing the secret of making gold with outsiders will bring “bad luck”. “We’ve kept it hidden for generations and the only time when someone came to know about it, ill luck fell on the village.” She is referring to the crackdown on villagers, especially young boys suspected to be Maoists. Four of her own brothers have been jailed. “Business has virtually shut down in Jharkhand. No one wants to come here anymore, because of the Maoist threat,” says the owner of the Meridien, considered one of the best hotels in Jharkhand’s Ghatshila town, a salubrious tourist spot. “No one wants to take the risk.”

The troubles are spreading to the clusters of villages that have sprung up along the “golden banks” of the Subarnarekha. Outlook reached these parts on the morning of October 24—coincidentally, it’s also Dhanteras, the day of wealth and precious metals. Kobita Deewar, a fisherman’s wife, allows us to follow her to the riverside. From 10 am to 4 pm, she and other women will be in the water, scraping mud from the banks, sifting the sand from the liquid which has dissolved gold and finally pouring it into metal bowls they carry with them. At sunset, they head back home.

In this way, the women collect “gold liquid” for a week. Every Saturday they “make” gold. The process, it turns out, is simple. The liquid is poured into a paste made from mercury. The gold congeals; the paste is then heated in a charcoal container. The impurities get burnt, what remains is pure gold. At the local market on Sundays, the gold is finally sold. In all, they make nine rothis of gold per week. At Rs 200 a rothi (a measure of metal), that’s around Rs 1,800 for a week’s labour.

As dusk descends on the Subarnarekha, the villagers warn us that we should try to head back before it gets dark. On the way back, we have to cross the jungles of Lodhasuli, notorious for people being waylaid at night. Not many cars venture here past dusk. The area is also under Maoist control. As our car was speeding along the highway, we saw a group of about 50 men approaching us from the thick jungle cover that runs along the highway. A huge sal tree lay felled across the road before us, evidently meant to force vehicles to stop. Showing admirable presence of mind, our driver swung around the car and sped in the opposite direction. Later, we had to be escorted along the stretch by the police in an anti-landmine tanker.

Little did those looters know: we were carrying back with us the traditional secret of making gold.

A Scheme For You Too