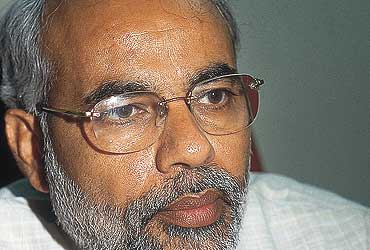 outlookindia.com
-0001-11-30T00:00:00+05:53
There seems to be a deep division within the BJP and higher echelons of the government over continuing with Narendra Modi. Despite the resolution adopted at Goa clearing Modi of all charges, the pressure on the government is enormous. So will Modi go? While the PMO has officially denied that there could be a change, rumblings in the Gujarat cabinet points in a different direction.

While Prime Minister A.B. Vajpayee and foreign minister Jaswant Singh are sensitive to international criticism, others like L.K. Advani are said to favour the continuance of Modi. The question is, for how long? Says a Union minister: "If Modi had been able to control the situation, then it was another story. Now it seems he is not in control, so what next?" Last fortnight, at least, three influential members of the Gujarat cabinet—industries minister Suresh Mehta, water resources minister Narottam Patel, health minister Ashok Bhatt and social welfare minister Faqirbhai Vaghela—raised the banner of revolt and posed several uncomfortable questions to Modi.

At least one Union minister, Kashiram Rana, also from Gujarat, has reportedly been in touch with some of those dissenters. And it's believed that the opposition to Modi from within his cabinet is, to some extent, the central leadership's doing. Former CM Keshubhai Patel, now a Rajya Sabha member, is also reportedly upset with the way in which the party is being projected in the state. Bhatt is known to be close to Keshubhai.

Now, with Gujarat literally burning after the fire services went on a wildcat strike because some of their officials was assaulted in Ahmedabad, the situation is grim. Modi is on the defensive and is reaching out to people like editors of Gujarat newspapers for a 'fair' assessment of his performance. That's being regarded as a major climb down.