'A Referendum Would Be Pre-Poll Rigging' 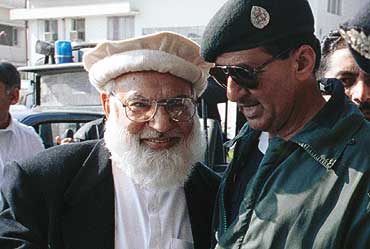 outlookindia.com
-0001-11-30T00:00:00+0553
What would be your strategy if Gen Musharraf decides to go ahead with his referendum plans?
A referendum will render the October elections meaningless. It would amount to pre-poll rigging.

The Jamaat under former chief Mian Tufail Mohammad had endorsed the last presidential referendum by Gen Zia-ul-Haq. Why are you opposed to the possibility of Musharraf doing the same?
I can't comment on what the former Jamaat chief did. But a military ruler shouldn't be allowed to prolong his dictatorship through a referendum. Such a move would be unconstitutional, as the president is elected by Parliament. The army officers are administered oath that they will not indulge in government affairs. If the general wants to become president, he should step down as army chief, wait two years as required by the Constitution, then contest presidential elections.

Some reports say your release was part of a secret deal with the Musharraf regime...
Rubbish. It was a legal compulsion because the government had no authority to keep me in captivity. The administrative power of detention (of three months) under the Maintenance of Public Order had been exhausted but they kept me for another month under another bogus case.

You still remain a harsh and vocal critic of Gen Musharraf's...
I'm not afraid of anything as my conscience is clear. Musharraf sold Pakistan to the US but gained nothing in return. Supporting US attacks on Afghanistan was his personal decision. He wanted to make it to Washington's good books.

Do you suspect that the elections wouldn't be free and fair?
Their actions so far show they want desired results. They want a Parliament consisting of their own people, offering no resistance to Musharraf as president. That's why they have increased the ratio of nominated people in Parliament.

Do you have any reservations about the appointment of Justice (retd) Irshad Hasan Khan as Chief Election Commissioner?
Yes, he is regarded as Musharraf's "yes man" who, as Pakistan's chief justice, allowed him to hold power for three years.

Is your party prepared to contest the October general elections?
We look forward to running a campaign for our seven-point charter of demands, besides preparing for elections. Foremost of those demands is the constitution of an independent election commission to hold fair elections under a consensus-based civilian caretaker set-up, restoration of the 1973 Constitution, release of religious scholars and other mujahideen and a halt to the ongoing crackdown on religious seminaries and mosques.

Will you contest the upcoming polls by aligning with other parties?
We're talking to Pakistan Muslim League (N) but it has failed to yield a positive result. The issue of leadership is problematic.

A Question Of Legitimacy