Home  »  Magazine  »  International  » expatriates »  A Quiet Riot On the Radio

A Quiet Riot On the Radio 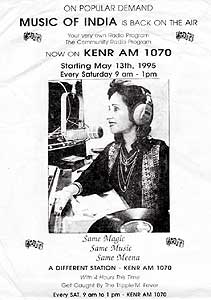 outlookindia.com
-0001-11-30T00:00:00+0553
IMAGINE living in acoustic images of home, delivered straight out of the crackling ether. In the day and age of televangelism, telling Indians in the US to switch on the radio is a bit like preaching to the converted. The news, the chatter, the music of India—at least during the rationed doses that desi broadcasting manages here, it sounds like home. But for some, communing across the static is more than a matter of idle nostalgia, to be indulged in on misty weekends. It's life itself.

Nita Goel Popli, to take one example, is a sort of long-playing radio version of DotComGuy—she didn't just grow up in the US, she practically grew up on air. Since 1981, when her parents, Vinod and Sudarshan Goel, started Vividh Bharati—the first Hindi-language programme in the Washington, DC area—hosting has been a way of life. At 17, Nita began co-hosting with her mother, while brother Vivek began manning the mixing boards.

"Everyone has seen me go from a teenager to a law student to a lawyer to a wife and mother of two, all on air," laughs Nita, who continues to divide on-air responsibilities with her mother. Sudarshan, a cultural informant and language instructor with the State Department, conducts her part of the show in shuddh Hindi, rather than the Hinglish that dominates the desi airwaves.

Of course, shuddh Hindi is by no means the staple diet of the young, estranged Indian—as community radio stabilises as a way of keeping touch, expanding to allow for more variety and voices, there's enough brash, risque programming going on to draw in a new immigrant listenership.

Anil Srivatsa—who came to the US in '97 and has notched up a bristling and loyal following on the East Coast with a peppery, 'shock jock' style—is one such. On a recent edition of his very literally titled show Anil Ki Awaaz, he decided his audience needed to hear about toilet paper. "It's a new experience for Indians," declared the 33-year-old DJ, half-seriously. "But no one wants to talk about it." Srivatsa's irreverent style has secured him access to the coveted youth market. But on the rather delicate subject he touched upon, he remains old-fashioned. "It's yucky," he said. "I still like the lota. I tell people they need to keep a mug."

Few Indo-American DJs match the bombast of Anil Ki Awaaz, broadcast from New Jersey on Saturdays and Washington, DC on Sundays. But in their own unique ways, radio hosts from Florida to Alaska have managed to turn their shows into weekly rituals for south Asian immigrants. Many of these programmes are broadcast from small, independently-owned AM radio stations or university stations. Their audience, anywhere from a few hundred to tens of thousands, is usually limited to the surrounding region, a radius that varies with the strength of the transmitter—unlike stations that broadcast on the FM band and use far more powerful transmitters.

The scale has been small and homely—as if the signals were going out to a dispersed herd, not a community—right from the early days. In 1975, Brij Lal, then a correspondent for abc Television, was persuaded to start a radio show from Fordham University, New York. "I had a couple of predecessors, but their format was limited," he says. "They'd play two or three records and get off."

Lal expanded the possibilities of the medium and introduced news segments and interviews with visiting Indian celebrities and politicians—leveraging the experience and contacts he had accumulated over three decades as a broadcast journalist with first All India Radio and then Voice of America.By '97, when he stopped his Bharat Vani, he had interviewed nearly every Indian PM. "I missed a couple; they were in for such a short time," he chuckles. Lal, now 76 and host of a TV show, also called Bharat Vani, reckons that his programme had some 100,000 listeners in the New York region. More crucially, he established the mix that was to become the standard for desi radio.

Initially, it was only in the large urban markets, where the first waves of immigrants congregated, that such programmes could be heard. As the diaspora trickled into smaller pockets of America, college towns and semi-rural enclaves, the medium followed, driven less by commercial spirit than by the instinct for community sustenance, and homesickness. "The nostalgia radio evokes can't be captured by the written word or pictures," says Vinod Vasudeva, who produces Manoranjan in Florida with wife Kusum. Whether it's R.D. Burman or Bally Sagoo on the air, it can make Indo-Americans feel, at least momentarily, that they never shifted home-base.

The DJ here becomes more than a dismembered voice. He or she is the mediator in this remembered play. "They respond with a lot of affection," says Meena Datt, who's broadcast in Houston since '76, "almost as if they're family." For Anil Srivatsa, though, the connection to India many immigrants maintain can be a bit too rigid. "Indians here are in a time capsule," he exclaims. "You can actually tell them what India was like in the '60s if you meet someone who came here then."

There's also a predictable split in attitudes on what community radio should broadcast. Many DJs tend to stick to the positive or cater to family taste, and usually avoid less salubrious material. "Now and then I do highlight the not-so-good, but overall, I try to make everything look pleasant and nice," says Datt, who finds an increasing number of Indian broadcasters and entertainers less-than-respectable. "It can get pretty uncouth," says Datt.

Srivatsa, for one, revels in his unorthodox radio personality. "I consider myself the media black sheep in the desi market," he says. "I believe the media sucks up to a lot of associations like the fia (Federation of Indian Associations) and all that. Nobody wants to offend anyone." Srivatsa's in-your-face style clearly works. Although his show has no measured listenership, it's managed to pass one of the toughest tests, that of advertisers. He hosts ads for business throughout the region—New Jersey, New York, Pennsylvania and Delaware—mostly grocery stores, restaurants and merchants. And lately, also high-end advertisers like Western Union and many mainstream dotcoms.

The trouble isn't always persuading clients to advertise. Sujatha Dharmesh, host of Sur Sangeet out of Dallas, found the challenge was collecting money from those who had run ads on her programme. Eventually, Sur Sangeet discontinued its station contract, which cost $900 for every six hours of broadcast time. "We became famous but weren't getting paid," says Dharmesh, who now runs the package over the internet. Agrees Srivatsa, "We have to chase. That's the nature of the business, the occupational hazard."

Having secured a hold in the DC market, Vividh Bharati is unlikely to go that way soon. But Nita has set her sights higher than mere survival. "It's always been our goal to put Vividh Bharati on FM," she says, "but there's no ethnic FM station willing to put on an ethnic programme." Currently, the show is an anomaly on its station, wdct 1310 AM—it otherwise broadcasts Korean language programming, 24 hours a day.Due to its considerable reach, however, Vividh Bharati has managed the rare feat of having its audience measured. Arbitron, which enables stations across America to set their ad rates, has gauged Vividh Bharati's reach at 75,000 listeners.

And this number, contends Popli, is proof that Indians could very well run their own 24-hour station. But they don't, because the Indians who own radio stations are not willing to sacrifice commercial prospects for community service. Until that commercial potential is fully revealed, it appears Indian DJs will, for the most part, sustain themselves on goodwill. Vinod Vasudeva recalls an episode: a listener left a phone message during the week—his father was terminally ill and he simply wanted something to honour him before he died.

That weekend, Vasudeva made a short announcement before playing a song, Ae Khuda, from the '80s film Abdullah. "It's a very moving song," explains Vasudeva, "of someone contemplating his life at the end. He's saying to the good Lord, 'Whatever your wish is, so be it.'" At the end of the song, he received a call from none other than the dying man's wife. "She was crying her eyes out," he recalls. "She gave us so many blessings." Well, that's radio.