A Question Of Legitimacy

Past referendums have been nothing but a farce. Will Musharraf be enacting yet another? 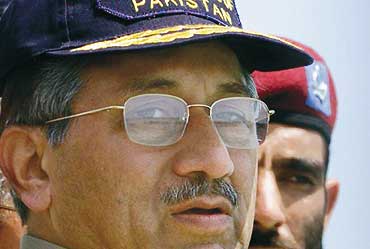 outlookindia.com
-0001-11-30T00:00:00+0553
It's a topic of conversation that is keeping the country breathlessly engaged: will President Pervez Musharraf seek a referendum and secure for himself another five years in the august office? Cartoonists are simply relishing Musharraf's palpable discomfort. One cartoon shows him stepping out of his limousine and consulting a roadside fortune-teller, sitting with his paraphernalia of envelopes and the prescient parrot, about what he should do. Another advises him to tailor the referendum to ask the question: "What is the name of Pakistan's President?"

Just about everyone in the country knows that Musharraf doesn't want to relinquish office. But the pressing problem before him is the method he should employ to legitimise himself. In October, an elected Parliament would be in place. Constitutionally, a president must win a majority of votes in Parliament for his confirmation. But Musharraf has completely alienated the political class and can't bank on its support for his survival.

That's the reason the idea of a referendum has been mooted. A president who wins it is a constitutional authority and doesn't have to seek Parliament's approval. It isn't, however, easy to win a referendum, more so because the alienated political class can rally the people to vote against the referendum and nix Musharraf's ambition.

There are some who feel the president is nervous about his future, pointing to the innumerable parleys he has been conducting with politicians whom he had so openly derided till recently. The president's spokesman Maj Gen Rashid Qureshi, however, says, "No, the government is not getting cold feet. The president has been holding meetings about the ongoing process with all political groups and the referendum issue has been brought up."

In the past, Ayub Khan and Zia-ul-Haq resorted to referendums to legitimise their presidencies. And most here believe Musharraf is headed the same way. But before he opts for a referendum, the general has to decide on its precise text. Will the referendum ask a direct and honest question: should Musharraf remain president for the next five years? Says political analyst Ayaz Amir, "Gen Musharraf is going to be around as president for as long as he fancies. Or for as long as the winds hold up for him. This much we know, this much has been declared, by none other than the generalissimo himself. The only thing remaining to be settled is regarding details and methodology. How to make the referendum exercise look respectable and not the farce to which it could so easily descend."

Pakistan's history, though, shows that referendums often tend to become farcical. When Zia-ul-Haq sought a referendum, he asked a simple question: "Do you want Islamisation?" Only 15 per cent voted, and the majority of them even said 'No'. But Zia didn't demit office. He convened a fresh election and asked the new Parliament to introduce an amendment to the Constitution confirming him in office for five years. He was refused, provoking the general to retract his promise of lifting martial law.

Ayub Khan employed a different method. He called a referendum in 1962, asking an electoral college of 80,000 members—called members of Basic Democracy or Basic Democrats—whether or not they wanted him as president. They voted in his favour. Recalls columnist Nusrat Javeed, "Once he got the 1962 Constitution in place, he then asked for a vote from the same electoral college. This time, though, the process was under a provision of the Constitution." But politicians of different ideological persuasions combined together and put up Fatima Jinnah, sister of Muhammad Ali Jinnah, as a candidate against Ayub. She won in East Pakistan and Karachi but lost to the field marshal.

Going by past experience, most political parties are opposed to a referendum.With the international spotlight focused on Musharraf, and newspapers like The Washington Post questioning the concept of a referendum, the political class feels emboldened enough to voice its opposition. Argues Jaweed, "Unlike the '70s, when the Movement for Restoration of Democracy ran out of steam, today they are likely to give the general a very difficult time." After all, even in Pakistan it is difficult to clothe dictatorship in the garb of democracy.