A Pilgrimage To The Shrine Of Reason 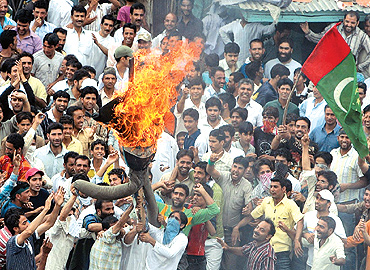 New Delhi refused to forgive the Hurriyat Conference for boycotting the round table discussions with the prime minister and it was staring at political irrelevance. The party decided to boycott the election, but New Delhi believed this was because the Hurriyat had been left with no platform from which to advocate rejection of the polls. Most of the suggestions that their leaders had aired from time to time as a possible basis for a reconciliation between Kashmir nationalists and Delhi had been appropriated by the National Conference and PDP.

The Hurriyat, in any case, was at sixes and sevens with each other and with other representatives of Kashmiriyat, like Yasin Malik. So even if they did change their minds and fight the election, they were almost certain to be decimated. New Delhi, therefore, had to do nothing but sit back, ensure a fair election, and let the exercise of democratic power bring the insurgency and alienation in the Valley gradually to an end.