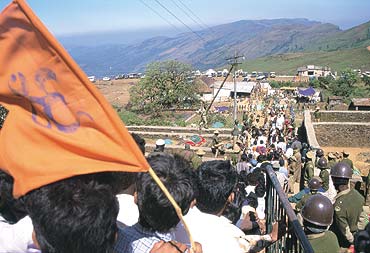 The Sangh parivar and the BJP play the communal card in Karnataka: A few years ago, BJP leaders liked to refer to Karnataka as the party's gateway to the south. Today, with the saffron party in alliance with the JD(S) in power, there is a buzz in the BJP in Bangalore—that the state, like Gujarat, is the Sangh parivar's new laboratory in the south. And for those waiting for a Hindutva surge in Karnataka, December 6 may well turn out to be a red letter day.

It is on that day that the 'prestige' bypoll in Chamundeshwari, where JD(S) and BJP have fielded a joint candidate against S. Siddaramaiah of the Congress, will be decided. It is believed that victory or defeat in this poll will prove crucial for the ruling coalition. If the BJP combine wins, it will be a shot in the arm for the parivar. Other than being the 14th anniversary of the 'fall' of the Babri Masjid, December 6 is also the day when the Datta Jayanti celebrations will get under way at the shrine of Sufi saint Baba Budangiri in Chikmagalur district, an event that has been a source of communal tension.

The BJP and the Sangh's declared objective is to instal an idol of Dattatreya, a local Hindu deity, appoint their own priest and conduct Vedic rites and prayers. The Baba Budangiri shrine has always been a place where both the Sufi saint and Dattatreya are worshipped by both Hindus and Muslims. The Sangh parivar now wants to claim the whole shrine and keep the Muslims out. 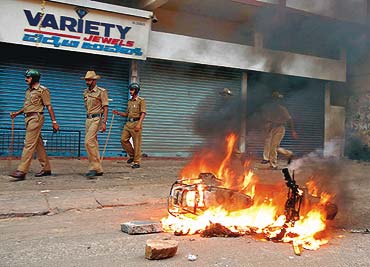 The communal riots in Mangalore in October were a rude reminder

The Sangh parivar in Karnataka has been preparing for December 6. The Mangalore communal violence in October, in which two Muslims were killed, is spoken of as a 'big message' to the Muslim community in the state. When Mangalore was burning, BJP minister Nagaraj Shetty, in charge of the district, reiterated how much he idolised Narendra Modi. Yatras by BJP leaders in the Malnad region, western Karnataka, over the last few months have been done with the purpose of "liberating" Baba Budangiri shrine. In 1999, former Union minister H.N. Ananth Kumar had sworn that the shrine would be the Ayodhya of Karnataka. This time around, with the BJP in power in the state, the parivar feels it is within striking distance.

In October, a revered icon in Karnataka, Tipu Sultan, became the target of the Sangh parivar after the BJP education minister, D.H. Shankara Murthy, painted him as an 'anti-Hindu' and 'anti-Kannada' ruler. These statements had come without any provocation, but the print space it consumed in the Kannada press was unprecedented. And the Ram mandir issue has been successfully revived in the communally sensitive Udipi and Dakshina Kannada districts where roadside meetings in towns and villages, sponsored by the Rama Mandira Nirmana Samarthana Samithi, happen almost everyday. "Nothing explosive may happen on December 6, but the very build-up and the hate campaign that we see in every corner of coastal Karnataka and in parts of Malnad is a well-planned strategy to intimidate the minorities," says Anand Kodimbala, a Mangalore college lecturer.

Such a meeting witnessed by this correspondent right outside the deputy commissioner's office in Mangalore on November 27 went like this: It is 4 pm in the evening, children are coming out of three Christian convents down the road (St Ann's, Carmel and Rosario). In the crowd, there are young girls with hijabs (the city has nearly 40 per cent Muslims) and nuns (20-25 per cent are Christians). In the vicinity there is also a dargah. There are more than 50 Mahindra jeeps with saffron flags parked. Traffic has been blocked. About a thousand people are squatting on the road listening to some astonishing demagoguery by pontiffs of local Hindu maths, including the influential Pejawar Vishvesha Teertha Swamiji.

The speeches are, among other things, about their '92 kar seva experience when Babri Masjid fell; the Upanishadic shlokas "found on the bricks" that came falling; Mohammed Afzal's hanging and how they would worship the judge who sentenced him as "Mahatma"; how the dome of the Babri Masjid appeared like the bald pate of then PM, P.V. Narasimha Rao etc. Surprisingly, there is no mention of Sonia Gandhi.

When Outlook asked Mangalore SP B. Dayanand why permission was granted for such a provocative meeting, he pleaded helplessness. "We denied permission for a protest procession. This meeting was only meant to give a memorandum to the DC and therefore we allowed it. We can't stop all meetings, we can only regulate them. We are actually in a Catch 22 situation—if we do not allow these meetings they will take a violent shape," says Dayanand. Almost all MLAs and MPs in coastal Karnataka are from the BJP. D.V. Sadananda Gowda, the state BJP chief, is Mangalore's MP. 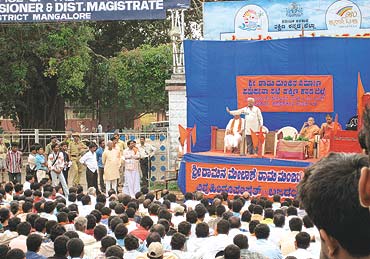 Dakshina Kannada district, in which Mangalore falls, is representative of the communal tension in Karnataka. It is feared that if the situation is allowed to slip any further, it would be the "Godhra of the south". The October communal violence justifies the fear: it was the first time in Karnataka that a constabulary had been accused of being communal. A charge that was treated casually by the state's home minister, M.P. Prakash, who reportedly told a human rights delegation that "you cannot help the presence of such elements in the force".

But the stories going around of the Muslim victims of the riots from Prof Phaniraj and G. Rajashekar, who went round meeting victims and are authors of a history of communal violence in Dakshina Kannada, is disturbing. Hear this one about a family in Ullal, on the outskirts of Mangalore, where the police barged into and allegedly "looted" a number of Muslim homes: "The police did not even have the names of people who they needed to arrest. It is just that Muslims had to be rounded up," say Rajashekar and Phaniraj.

Like it happened in Gujarat, where there was a sustained hate campaign against the Muslim community for more than 15 years before Godhra happened, Dakshina Kannada too has a history of communal violence, which came to the fore first during the riots in December 1998. "We, the people of Udipi and Dakshina Kannada, tend to boast of our accomplishments as highly literate districts, as leaders in the banking and hotel sectors. Now we have one more feather in our caps: we are the districts with the highest rate of violence against minorities, courtesy the Sangh parivar. Simply put: there is one such incident of violence almost every day," say Phaniraj and Rajashekar.

Additional district magistrate A.G. Bhat, who agrees the situation in the district is volatile, says: "There are three issues around which clashes happen in the district—cattle slaughter, elopement and eve-teasing, and religious conversions and processions." On the day we were in Udipi, there was a case of a Muslim boy being beaten up by Sangh parivar activists for talking to a Hindu girl who was his classmate.

Earlier, there have also been instances of Bajrang Dal activists storming a movie theatre in Puttur with the hope of catching young lovers of different faiths "red-handed". There have been attacks on youngsters taking a stroll on the beach. There have also been brutal murders for the crime of having fallen in love with a person of another faith. "The atmosphere is vitiated, my personal view is that there is a feeling of insecurity among Muslims here," says Bhat.

The cow-protection programme of the Sangh parivar in the district is pursued so seriously that in May 2006 a gang of 10 Bajrang Dal activists assaulted a Brahmin priest in Udipi district, for mediating the sale of cows. Similarly, the Hindu Yuva Sena ensured the Nejaru village gram panchayat cancelled the licence of Kasim Saheb to sell beef. In Adi Udipi, a Muslim father and son were paraded naked for trading in cows. In conversion cases the attack is mostly on the Protestant community.

Strangely, Opposition politicians are silent. Senior Congress leaders like Margaret Alva, Oscar Fernandes, Veerappa Moily and Janardhan Poojary all hail from coastal Karnataka, but they have been mum about the trauma of the minorities. Even during the October riots, they were missing. "The Congress leaders have forfeited the political space to the Sangh parivar," says Rajashekar. When an alliance was forged with the BJP in February 2006, CM H.D. Kumaraswamy had said he was still searching for the meaning of the word "secularism". One can only hope that the communal situation in Dakshina Kannada would offer him some insight.