A Paper Boat In The Gutter

The formidable battleship of yore, INS Vikrant, faces its worst enemy ever—red tape. The vessel stands suspended between glorious history and the anonymity of the scrapyard. 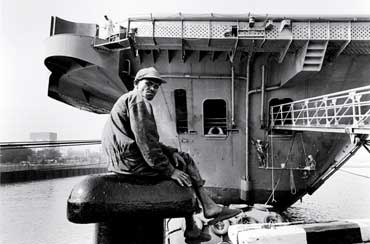 outlookindia.com
-0001-11-30T00:00:00+0553
Matters concerning life after death is chiefly God's business. But since the last place he can be found is in the Maharashtra government, the poignant tale of a dead warrior is drifting towards the age-old question—now what do you do with the body?

ins Vikrant, Asia's first aircraft carrier, the untouchable force that launched a thousand Sea Hawk sorties, the brawn behind the liberation of Goa and the curse of Pakistan in the Bangladesh liberation war, is today fighting its last battle. Against time, nature, and the most fearsome foe of all, the Maharashtra government.

For a ship that's covered five lakh nautical miles or gone 15 times around the globe, survival today is about covering that half-a-mile from the naval dockyard, where it rests like a liability, to Oyster Rock, on the southern tip of Mumbai harbour. If it reaches Oyster, it becomes a museum. If it doesn't, it vanishes forever. And it has to make the brief last journey soon. The hull that has already seen extensive repair is corroding, the entire mass that once upon a time smelt of fresh paint is rusting. And the few men on board are getting restless for there may be glory in being perched on Vikrant but promotions don't come by serving the dead.

That's why this final battle is all about time. The warship has been stripped of its guns but if they were still on, they would possibly point at a building about a kilometre away—Mantralaya—where the foe immobilises time, every day, for a living. But it's not true that things don't move in that place. Files go up. Files go down. One of the files is something called 'Preliminary Report'— submitted by Tata Consulting Engineers, which was appointed to look into the modalities of converting Vikrant into a maritime war museum. After the chief minister finds time to look at it, there will be another report called 'pre-feasiblity' and then another called feasibility. Rigor mortis has never before been translated into English. Then one day, if the men in white decide that the ship should be taken to Oyster Rock, it will take two to three years for the museum to take shape. It will cost over Rs 94 crore at today's prices. This figure will only go up. Since the state government does not have money for such a project, private bids will be called for. The Tatas, Reliance, the UB Group and Ashok Leyland have shown interest but a chief demand is chopper-landing facility and a good revenue model. They will put in the money if they are told how they can make money out of it. That's what the feasibility report will tell them, whenever it comes.

If some unusual good luck visits Indian citizens, at some point in future, Vikrant—commissioned in 1961 and decommissioned in 1997—will return dressed in fresh paint, bright and grand. There will be cafes and restaurants on it, men women and children will be taken for a trip inside and old hands will tell them with somewhat misty eyes about those distant heady days when there was so much glory just in standing in its kitchen. For those who have more money than most of us, a chopper will take off from a helipad on an aerial tour of Mumbai. For a city that has nothing to show but dreams, this will be a cynosure. This will be the place where tourists flock to. This will be the brochure picture of Mumbai. Like the uss Lexington which makes over $60 million every year as a museum, Vikrant will be worth all the trouble.

Reality on a muggy Monday afternoon, however, is slightly different.Our journey to the warship that nobody wants progresses at the rate of one nautical inch a day. That's how fast files of request move on tables. It's not surprising, for the familiar foe is known to tether time. If only time could move at the speed of wish, ins Vikrant would have been a museum today. But right now, it's nothing more than a monstrous relic that cannot seem to move on its own. Glory going to seed.

Those where the days when some 2,000 men in starched clothes would stand proudly on the deck. Now about 100 disgruntled men—mainly lowly technicians who have been assigned this job—look out at the still waters, waiting for something to break the eerie silence of the undead. Among the few things they do here is go through the motions of a fire drill everyday. They take water from the sea and pour it on the ship. There is hardly any equipment left. The guns have gone. The air control tower is nothing more than a ladder bisecting rusting cabins. The sprawling runway from where light aircraft used to zoom away is today a good batting pitch on which the seamen play cricket on lazy afternoons. "But the ball keeps falling into the sea," says Prabhu, an orderly. So they play in the hangar down below these days, beside a still Sea Hawk and a deader French anti-submarine aircraft called Alize. The launch pad, which used to lift itself from the depths of the hangar on to the runway, so that aircraft could be rushed off somewhere, doesn't move anymore. It's a good bouncy pitch now for a rubber ball. Cricket is a relief to most of the men on board this ship. Uncertain of their role, they are getting annoyed with this grand old lady. An officer points out: "There is a section in the navy that wants the ship to be scrapped out because serving on it affects their career growth."

Commander Patil, who is on board the ship, adds: "As professionals, we don't think serving on Vikrant will take us up the hierarchy, but we look at it as an honour. Today we feel insecure about our future. Since we're so attached to the ship we'd like to see it become a museum but if private parties take over, they may not want us to maintain it." Right now he feels he is guarding something nobody wants.

But despite being in disuse, the aged warrior costs a lot of money to maintain. This is one reason why initially there was an attempt to send her to the scrapyard. But when emotions triumphed and, more significantly, when the only bidder to a tender whispered a paltry amount of Rs 6 crore, the state government decided to take it upon itself to mummify the warship.

Today, electricity, rations and other things amount to about Rs 1 lakh a day, says a concerned Commander Patil. "Initially, since the hull was in a very bad shape, the state government spent Rs 5 crore repairing it." But in two years, due to corrosion, the hull has to be refurbished again.

And it's going to cost a lot more money to make the old lady look presentable. If Vikrant is to be made a museum, some Rs 100 crore will go in dry docking, grouting the ship which will include building piers and causeways, painting the massive structure, buying new equipment and furniture. As time slips by, these expenses will grow. But in Mantralaya, the preliminary report on Vikrant's future is somewhere on it's way—up or down the six floors.

The matter is now 'with' the department of urban development. Principal secretary A.P. Sinha is a calm man who believes everything happens for the good. He tells us with a very dull look: "There is no story. Ever since Oyster Rock was announced as the site for the museum by Chaggan Bhujbal (Maharashtra deputy chief minister), no new development has taken place. Nothing new has happened. Sorry to disappoint you but there is no story."

That, sir, is the sad story.