A Paisa For Your Thoughts

For the poor, the fruit of reforms still look to be on a branch out of reach. Is government machinery to blame? 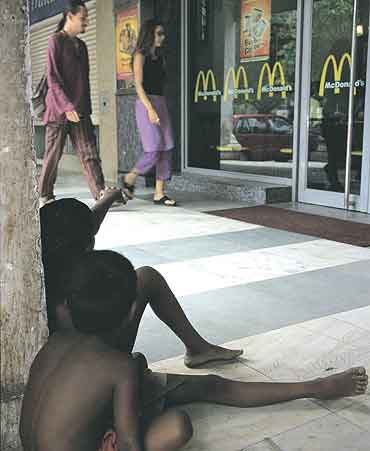 outlookindia.com
-0001-11-30T00:00:00+0553
Some things never change in India. As I cruise to a stop at one of the capital's many traffic signals that says 'relax', on a road that's much smoother than in 1995, in a vehicle that has the latest global quality certification, breathing in an air much less polluted than a decade ago, surrounded by several cars sporting MNC tags and well-dressed people busy with their laptops or talking into their mobiles, a thin little hand taps at my rolled-up window. The little boy wants a rupee. A rupee that might buy him only a few peanuts from a kind vendor or half an earthen cup of tea.

Even if the beggar earns Rs 10 by the end of the day, he'll manage to keep his chin above the poverty line. But only just. In India's capital, where the cost of living is the highest, you should consider yourself lucky to get even one meal for Rs 10, nutrition and the government's estimate of 2200 kcal (poverty line) be damned.

India still has 450 million people earning less than a dollar a day (700 million at less than $2 a day), which is the World Bank's globally acknowledged definition of poverty. That figure is almost the same as our workforce. It's also a little less than our burgeoning middle-class, the great brown hope for our country as well as for many countries across the border, which are looking to sell more of their products and services to us. At Independence, the country was widely regarded as a poor country, overlaid though by a thin layer of maharajas and commercial moghuls. In purchasing power parity terms, we now have a per capita income of $2,900, which is only a little less than what a World Bank-defined higher middle income economy should have. Some private estimates (like economist Surjit Bhalla's) also put the number of very poor people at much less than 200 million.

Clearly, the country as a whole has come a long way in the past 10-15 years. It is not only progress made in numbers and all those things that can be denominated in terms of money (Alfred Marshall's definition of economics). It's also a sort of progress that we understand better now—the wealth of nations, as Adam Smith explained, lies also in the capacities of its people, to produce, to invent, and to organise. If half of all Indians live at less than $2 a day, and consider that they live well (because our goods and services are cheap), are they still capable of using their mind and body to produce, invent and organise?

It's a question whose answer can no longer be left at the mercy of the market. The price system, it's fairly obvious now, is better able to maximise profits rather than human welfare. It also fails to reflect adequately the needs and interests of future generations. Growth removes poverty, indeed, but it does so excruciatingly slowly in a country like India with its many intricate welfare-absorbing, even welfare-negating, channels. Faster growth does it better, but even according to dream-seller Goldman Sachs (BRICS report), the US will have a per capita income exactly ten times ours just ten years on. We'll take another 45 years to reach a level that the average US citizen enjoys now. That's more than a generation away.

There are thus some strong practical as well as ethical reasons for "attacking poverty". Every year, the Indian government unspools several such schemes, in full knowledge that only a fraction of the money spent may ultimately manage to raise capabilities. But despite the huge public cynicism and outcry of the elite, how does a democratically elected government stop spending on such welfare schemes?

Especially since some 15 years after reforms, the main criticism against liberalisation is that it hasn't touched the poor, except in their TV sets. Yes, poverty is lower, but the rich and the upper middle-class have become richer much faster than the poor have felt their situation improve. In economic terms, the basket of consumable goods and services for the rich has widened far faster than it has for the poor. Even though international studies find the inequality index to have worsened little in India in the '80s and '90s, the average disquiet at the obvious inequities is palpable.

Data indicate significant progress in social and economic climbing. Over the past decade (NCAER data for 1995-96 to 2001-02), the number of the poorest in urban areas has actually halved to 14 per cent of all Indian households. The reduction has been slower in rural areas, from 57 per cent to 42 per cent. In all, only 68 per cent of households now belong to the lowest and lower middle classes, while the number of households in the high and upper-middle income groups has almost doubled to 14 per cent.

But can reforms be spoonfed to the weaker sections? Even if it can, the government machinery is definitely not the ideal instrument for that. When India's finance minister talks about linking outlays to outcomes, he's fully aware that he's not walking the talk. That would take punishing the no- or poor-outcomers (in this case tardy states), a near-impossible task in a coalition administration.

Isn't it more important then to get some vital political and administrative reforms on track before we can liberalise economic policy further? Take FDI, for instance. Major FDI liberalisations are yet to translate into dollars on the ground because of entrenched bureaucratic procedures. The World Bank estimates that it still takes 89 days to start a business in India and all of 425 days to enforce a contract. We also take the highest ever time, 10 years, to declare a business insolvent and file for bankruptcy.

Or take something like infrastructure for the poor. Roads don't get developed, or break down, because of poor contracting, water pipes and hospitals get waylaid before they reach a village with little political voice, schools come up in hilly terrains but teachers to climb the slopes are scarce, land rights are important for the poor, yet a certain amount of land disqualifies them for government employment schemes.

A direct attack on poverty is actually made up of such mundane, day-to-day issues. It is always the vocal classes that seek and get free lunches, the poor must be willing to pay for access to all available goods and services. What is needed for that access is a committed and honest administration. Even 15 years after reforms, that goal seems less attainable in the near future than an American-level income.