A Pail Of Piety Against An Augean Stable

There are structural aspects to a problem as complex as corruption. These cannot be tackled through punishment alone. 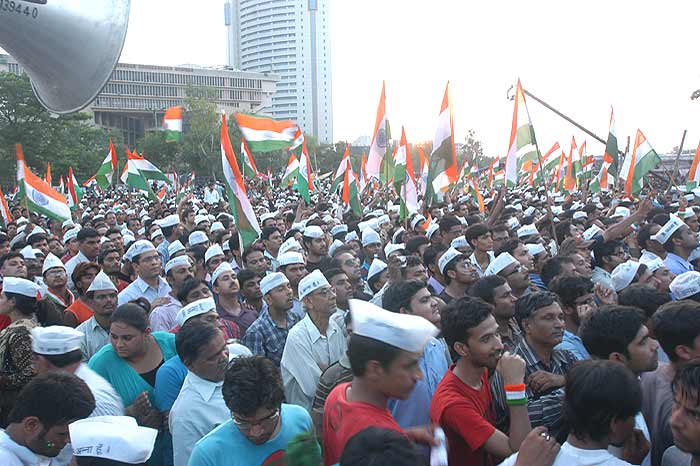 Just as our society tends to latch on to holy men for miracle cures, in recent weeks, the urban middle classes have placed great hopes on an anti-corruption movement led by a pious man in a Gandhi cap. (The other claim on leadership by a holy man in red robes did not quite pan out as intended.) The Anna Hazare movement wants to fight corruption with a new bureaucracy that will have drastic monitoring and prosecuting powers over politicians and officials. I’ll not comment here on the methods it has used to put the issue on the public agenda (including regular disparagement by Team Anna of institutions and practices of representative government), nor shall I comment on the wisdom of imposing a new super-agency (Jan Lokpal) on top of current institutions like the Central Vigilance Commission or laws like the Prevention of Corruption Act of 1988, without looking into the reasons why the latter have been relatively ineffective. I shall instead largely confine myself to the structural reasons for corruption which are not being dealt with and why merely tightening the punishment mechanism for bribe-takers may be woefully inadequate.

China has the severest punishment (execution) for those charged with corruption, after a trial that is usually summary. Yet, this has not much reduced the rampant corruption there. If there is sufficient gain from a transaction for bribe-givers, they will find a way of tempting bribe-takers. In fact, when the risk of being caught and punished goes up, it is quite likely that bribe-givers will offer a risk premium to bribe-takers, leading to an increase in the size of bribe—quite a paradoxical result of having a more stringent punishing agency. It is curious that the Anna Hazare movement focuses more on venal bribe-taking politicians, not on their sometimes wealthier bribe-givers. One has seen quite a few businessmen and film stars in the cheering crowds. Of course, one can say that they pay bribes, but resent it. That depends on the type of corruption.

Corruption is primarily of two types: one is where bribe-givers pay money to speed up what officials are supposed to do as part of their regular duty; the other is where officials are paid to do what they are not supposed to do—for example, to look the other way when goods are smuggled, taxes are evaded, property value is under-assessed, driving licences and bpl or food ration cards are issued to unqualified people etc. The latter cases involve collusion between bribe-givers and bribe-takers to evade laws, and gains by both parties. Thus neither is likely to report this to investigators. It will be hard for many people in the urban middle class in India to honestly say that they have not been complicit in some collusion of this type. Chanting slogans in support of a pious man in front of TV is much easier.

Making punishment for corruption more stringent could make bribe-givers offer premiums to bribe-takers. This too needs to be thought through.

One problem of successfully prosecuting corrupt officials is that it is difficult to legally distinguish, beyond reasonable doubt, between outcomes of simple ineptitude and dishonesty. Sometimes, small changes in administrative procedures work better than a super-bureaucracy (even apart from the ever-present questions of ‘Who monitors the monitor?’ or ‘Will all members of the official Lokpal bureaucracy be incorruptible?’ and so on). One such change is reducing the monopoly power of the official that the client has to face, wherever feasible. In the US a citizen can get a passport from almost any post office, and so corruption in getting passports is much less than in countries like India, where the passport-issuing officer has a monopoly. Another case of reducing official monopoly power is from the historical examples of reducing corruption in the customs office in Singapore or the narcotics control section of the New York Police Department, by introducing overlapping jurisdictions of officers (in the latter case, for example, local, state and federal agencies had overlapping involvement in controlling illegal drugs, which used to be a major source of police corruption).

A less simple but important administrative reform is to change the current system of bureaucratic transfers and postings, which is a major source of illicit income of politicians in state secretariats. In general, career promotion for officers in India depends more on seniority than on performance, so an officer has the incentive to maximise his or her loot in the short period of a local posting before transfer. The Chinese governance system limits local official corruption by giving the local official more of a stake in the local economic performance. Chances of career promotion improve if the area under his jurisdiction grows faster. So even when he steals, he takes care, in his own self-interest, that the general economic performance of the area does not suffer.

What are the structural reasons corruption may have increased in recent years? First, in some sense, the increasing corruption may be a consequence of India’s recent success in high economic growth; with growth, the market value of scarce public resources—land, oil and gas fields, mineral resources, the telecommunication spectrum etc—has shot up, and so has the chance of making money from their favoured allocation by a public authority. Economists have thought about various imaginative auction mechanisms for such resources, whereby the public could benefit from getting the maximum surplus out of public resources.

Second, over time, elections at all levels have become far more expensive in terms of the cost of publicity, petrol for transport and alcohol and cash for the large numbers of youth hired to mobilise votes. Without public financing of elections, raising money from business sources, often through illegitimate means, is indispensable, of course, with quid pro quo deals in terms of policy favours. The activists hardly give enough emphasis on a whole package of necessary electoral reform, including public financing of elections, regular audit of accounts of political parties (here the bribe-taker is not an individual), disqualifying those with criminal charges from contesting elections (since this often leads to too many flimsy charges against political opponents and the cases go on dragging for many years in the clogged courts, this should be accompanied by special tribunals for fast clearance of such cases) etc.

Third, in the last two decades, there have been major policy changes, involving large transfers of funds from the central and state governments to various local-level programmes. For example, with decentralisation and devolution of authority to local sub-provincial governments, corruption may increase if proximity makes capture of local governments by the locally powerful people easier than in the case of higher-level authorities. Similarly, large sums of money are now spent in various anti-poverty programmes which, at the numerous local points of delivery, are difficult to monitor and audit.

Fourth, with the rise of hitherto subordinate social groups in political power, while this has in some sense deepened Indian democracy, the social churning may have had some adverse effects on the level of corruption. Let us point out at least two ways in which lower-caste emergence can contribute—and might have contributed—to more corruption. One is that aspiring low-caste persons, in their upward mobility, lacking the network and connections of upper-caste people, may use money as a substitute to climb their way up. The other is the fact that low-caste groups and other ethnic minorities often elect even corrupt leaders belonging to the same ethnic group, as issues of ‘group dignity politics’ trump other considerations. However, the history of south Indian politics, where such ethnic awakening happened in the early decades of the 20th century (much earlier than in north India), gives one some hope that, after the initial play of dignity politics wears off, voters start demanding more efficient and honest governance even from leaders of their same ethnic group.

One should also keep in mind that the perception of corruption often goes up in the public mind when a number of politicians and officials are arrested, as has happened in the last few months, when the system finally seems to be taking some remedial action, than in the days when they quietly got away with their misdeeds.

Paradoxically, the pervasive perception that every one around is corrupt can sometimes actually increase corruption, as otherwise honest people yield to temptation more easily, since the chances of being individually detected are smaller, the expected reputation loss on detection is less important and the search cost for finding a briber is less.

Finally, overzealousness in erecting a corruption-detection machinery, for all the good intentions, can stifle honest and potentially beneficial but inherently risky decisions and dynamic leadership by public sector officials. If a risky decision does not work out, and somebody somewhere is seen to gain as a result, that often works as prima facie evidence of corrupt intent, and in anticipation, an official will often opt for less bold policies or status quo.

All this is to illustrate that corruption involves a set of complex and occasionally paradoxical issues that cannot be resolved by simplistic pious slogans.

(The writer is a professor of economics at the University of California, Berkeley.)