The N-word, as seen by scientists, polemicists, idealists and realists 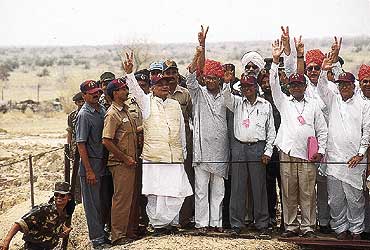 Out Of The Nuclear Shadow
By Smitu Kothari By Zia Mian
Lokayan & Rainbow Publishers Pages:525; Price:275

As fatiguing as a marathon run must surely be reading 66 essays—even though the 35 contributing authors wrote them in anger, anguish and despair. The nuclear 'debate' in South Asia has now moved from the simplistic levelsBooks of 'to test or not to test' into the complex bylanes of weaponising, deploying and establishing command and control. like this one will always enrich the debate by bringing in human values, ethics and morality into nuclear strategy, missile payloads and the Constant Error of Probability. Like the forgotten movement for nuclear disarmament in the UK in the '60s, which reintroduced moral concerns about nuclear weapons even amidst a bitter cold war, Out of the Nuclear Shadow must be read by all those in the business of establishing deterrence and creating nuclear stability. The book aptly begins with Mahatma Gandhi's statement on the bombing of Nagasaki and Hiroshima and follows up with Arundhati Roy's ever-readable The End of Imagination. These two essays lay the groundwork of the moral, human and ethical concerns against nuclear weapons. Joining them are a host of excellent authors with essays from both sides of the border, that include Anand Patwardhan, Praful Bidwai, Amartya Sen and Ashis Nandy from India, and I.A. Rehman, Pervez Hoodhboy and Zafarrullah Khan from Pakistan. These indeed are 'Voices of Conscience', and voices that occupy the moral high ground as any strategist would gladly concede.

Mixed up among these famous names are some other famous names who haven't written as 'voices of conscience' but essentially as suggestions of an alternative strategy. These essays are unlikely to exert much weight on the debate, for the authors have mixed up strategy and morality and often appeal for a more moral or ethical course of action because the present one is patently bad strategy!

It is interesting to know where the scientists stand in all this protest, since they created the monsters in the first place. There is a rather tame piece from the Indian scientists against nuclear weapons, but no mention of the awful sight of the Indian nuclear scientists in Rajput turbans cavorting at Pokhran, or their Pakistani cousins doing something equally horrible. Most unconvincing is the protest by the biologists whose colleagues are even today cloning human beings in some dark and secret laboratory or protesting the attempt to legislate uncontrolled science. On the one hand, almost all scientists claim the right to pursue research to its ultimate ends, indeed argue passionately about the excitement of working at the frontier of knowledge. At the same time, they have no answers on preventing many of their colleagues from misusing science to give their masters military superiority. This is the point at which the realists diverge from the idealists. The former attempt to 'manage' the monsters who continue to be created by the march of technology, while the latter merely exhort the Dr Frankensteins to desist.

Interspersed among the essays occupying the high ground are a couple of Pakistani essays that bemoan the Indian initiative in testing, thereby forcing Pakistan to divert its meagre resources into nuclear weapons. This is precisely the trouble with departing from the straight and moral path, for one then has to forget 'eating-grass' Bhutto who convened a nuclear bomb-making durbar immediately on returning from Shimla. Or worse, the recent admission by Pakistan that it started work on the nuclear bomb trigger in March 1974, two months before Pokhran I and 14 years before Pokhran II.

There are six excellent essays on the role of the media in the run-up to the tests and the unseemly celebrations that followed. The general complaint of the essays is that the media supported the tests by both countries and didn't give enough coverage to those who opposed them. Perhaps the popularity poll conducted by one of the papers gives the answer to that one. If 91 per cent of the people allegedly supported the tests, it would be an altruistic press that would write the opposite. Some criticisms of the tests appear to be criticism for its own sake and end up with authors taking opposing views. One writer challenges the yield at Pokhran II justifiably, but surely this is building a case for further explosive testing—a view contested by another author strongly supporting India's urgent accession to the ctbt. A number of peoples' organisations on both sides have issued joint statements condemning the nuclear arms race and this is a most encouraging sign. Among the best of these statements is surely the one that came out of Pakistan after a series of meetings in Karachi, between members of nine Pakistani political parties. Equally commendable is the fact that retired Pakistani officers outnumber Indian faujis four to one in the joint peace declaration by the two sides.

The large number of essays, which may exhaust a reviewer, is perhaps an attraction to readers who can select the views closest to them. Attractively bound (hardback edition priced at Rs 500) and well edited, the witty illustrations break the monotony of ploughing through a 500-page book. It's definitely worth a buy.