Home  »  Magazine  »  International  » diplomacy: pakistan »  A Midstream Game For You And Me

A Midstream Game For You And Me

Besieged in Af-Pak and festering with sores, Pakistan sees the virtues of peace with India 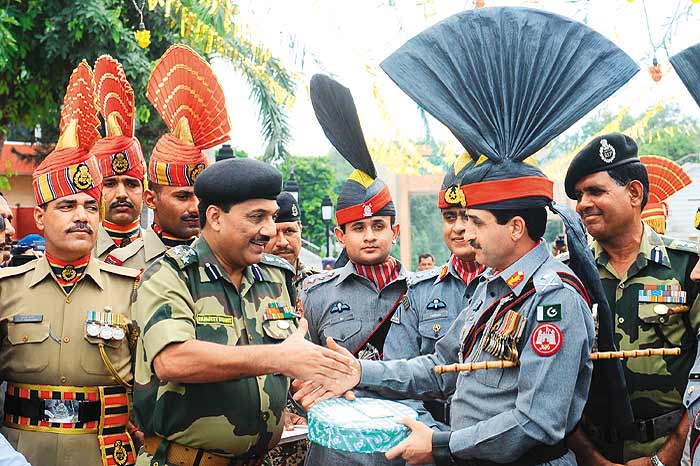 Being “tailed” is a common experience for most visitors to Pakistan, particularly those from India. For Indian journalists, it approaches leech-like adherence. Usually one gets followed around in a two-wheeler; however, persons of exalted status get followed by spooks in a car. But being escorted through the busy streets of Lahore with jeep-loads of armed commandos is a novel experience for an Indian journo. After decades of hostility and four wars, Pakistan seems to have embarked on a public relations overdrive to deliver a simple message to India: “We want peace and normal relations.”

The paraphernalia with the armed cars, the wide access given to the visiting media team from New Delhi to places like Swat, Rawalpindi, even Pakistan-occupied Kashmir/Azad Kashmir—areas mostly out of bounds—are all part of the charm offensive.

“We are willing to do business with India with a new mindset,” Pakistan’s foreign minister Hina Rabbani Khar told Outlook. She added, “Rather than stating our known positions, let us do something new to move forward.”

“Bridging the gap between the perception and reality is one of the biggest challenges for us Pakistanis.”
Firdous Ashiq Awan, Former I&B minister, Pakistan

Such periodic initiatives bring out the sceptics in force, willing to shrug it off all with a “we’ve been there before and we also know how it finally ends....” India-Pakistan relations have certainly been torturous. For much of the past 60 years, India has either been at war with Pakistan, or busy dealing with long spells of terrorist activities originating from Pakistani soil that targeted its cities. On occasion, with vicious irony, peace talks have ended in renewed hostility. For example, Atal Behari Vajpayee’s initiative in 1999 that ended in the Kargil war, or Asif Ali Zardari’s attempt in 2008 to develop friendly ties, which was followed by the Mumbai terror attacks.

What seems new this time is the fact that the avid seriousness with which Pakistan seeks peace with India is also aired by all “the stakeholders” (see box). For once, the government, the army, the ISI and the civil society in Pakistan seem to be on the same page about seeking peace with its largest neighbour. Knowing how hostility towards India has deep roots in Pakistan, could it be that some innate changes in the past few years are driving a genuinely new attitude?

To start with, the Zardari regime is about to complete its full term in office. This is a marked change, since most elected governments in the past were inevitably toppled by the army before they could complete their term. Pakistani politicians say parliament is “taking its rightful place” where all key decisions are taken by it. The judiciary, for one, particularly the Supreme Court, is another institution that has been gathering strength over the past few years, sparing neither the prime minister nor senior army officials for wrong-doing. Added to these structural changes is the revolution in the country’s media, which debates and discusses all topics and scrutinises the role of not only the government, but—often at great risk to journalists—also the army and its dreaded intelligence wing, the ISI. There are no “holy cows” any more in Pakistan, a TV talk show host says. “Being anti-India does not get us the eyeballs any longer,” she adds. Instead, what get the eyeball are lively debates on Pakistan’s internal and external policies. One issue still rankles many Pakistanis, and that is the non-inclusion of Pakistani players in the IPL, which is hugely popular and watched daily by large numbers. The change in attitude on Pakistan’s streets is obvious: the IPL has replaced Kashmir as the most frequently asked question to Indians. 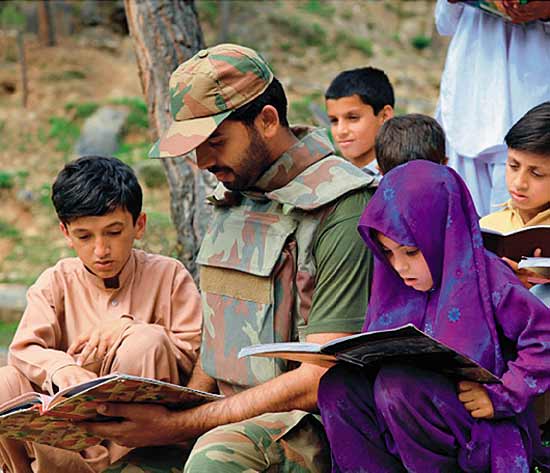 A Pakistani soldier helps a boy with lessons in Swat

“Bridging the gap between perception and reality is one of the biggest challenges for us,” Firdous Ashiq Awan, former information and broadcasting minister of Pakistan, told Outlook. She expresses hope that soon the two nations would be able to build a relation that would allow freer travel of people, commodities, news and movies across their borders along with, very importantly, capital for investment.

But why is Pakistan so suddenly keen on peace with India?

“We’re willing to do business with India with a new mindset to move forward, rather than stating our known positions.”
Hina Rabbani Khar, Foreign minister, Pakistan

Of a number of reasons for this, one is obviously the strained relation between Pakistan and the US. Surveys in Pakistan show that the US has now replaced India as “enemy number one”. The continued drone attacks within Pakistani territory, resulting in death of Pakistani soldiers and civilians, have made the US anathema with the populace. This has forced parliament to stop (and now, review) US and NATO supplies for Afghanistan through Pakistani territory. But the Pakistani army is also engaged in an ongoing battle with extremist groups with close connections with the Taliban and Al Qaeda, like the Taliban-e-Tehreek Pakistan (TTP). A visit to the picturesque Swat Valley indicates the extent of the threat the army faces from these groups. The area was freed from TTP control after years of fighting. Today Swat is a success story for the army but any attempt by it to leave the place is followed by fervent pleas from scared locals, asking it not to go. The army is wary of spreading itself thin, and that could be one reason why it has not launched an attack on the TTP stronghold along the Af-Pak border. But it knows the western front well—the border is not likely to settle down in a hurry; it could get much worse after 2014, when the US and NATO troops finally start withdrawing from Afghanistan. Prepared for a long haul there, it wants its eastern border with India to remain “cold” or peaceful.

Added to these strategic and military concerns of the state is the poor condition of the Pakistani economy—it has grown only by 2 per cent in recent years. With a large, youthful population—an estimated 55 per cent Pakistanis are below 25, large numbers of whom are unemployed, and some with little or no education—the government faces a huge challenge. It gets tougher with the knowledge that Pakistani society is gradually being radicalised, with extremist elements preaching a brand of Islam that keeps the nation from transforming into a modern democracy. “One can be targeted even for making a remark which is benign,” says Tehreek-e-Insaf leader Imran Khan.

This combination of circumstances has forced Pakistan to look for peace with India. Pakistani leaders acknowledge that since most outstanding issues between the two sides are difficult to resolve in a hurry, trade offers an ideal neutral terrain for cooperation and reducing tension. This can help reduce the “trust deficit” and allow the two sides to de-emotionalise the intractable issues.

“The issue of Hafiz Saeed has moved beyond India and Pakistan. The US is involved...India should share evidence with us.”
Rehman Malik, Interior minister, Pakistan

“But many still see India as a large country with a small heart,” says PML(Q) leader Mushahid Hussain. He feels that as the larger country India should take the initiative and be generous in accommodating some of Pakistan’s grievances. Though he mentions Kashmir as something that needs to be tackled, he feels an agreement on mutual withdrawal of troops from Siachen is achievable.

However, former Pakistani high commissioner to India Ashraf J. Qazi sees that as a wrong starting point to engage with India. “We need to turn a new leaf in our relations. Let us look at areas on which we agree to cooperate with each other before taking up the more difficult ones.”

But what about issues like terrorism or extremist elements like Hafiz Saeed, who India claims was the mastermind of the 26/11 attacks?

“The issue of Hafiz Saeed has moved beyond India and Pakistan. The US is involved now,” Pakistan’s interior minister Rehman Malik told the Indian media. He pointed out that the US has better investigating skills than either India or Pakistan. But when asked by Pakistan, the US has admitted it does not have any hard evidence against Saeed on terror charges. “If America doesn’t have any evidence and as India claims to have evidence, it should be shared with us,” Malik added, putting the onus squarely on India.

Policy planners in New Delhi might be happy with the loud and clear message of peace coming out of Pakistan. Even if it lasts for a few years, both India and Pakistan can do with a respite from some insurmountably divisive issues that have plagued relations. This time, the gains might be for keeps.