A Mere Flick Of The Wrist 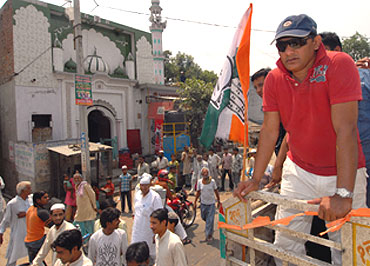 outlookindia.com
-0001-11-30T00:00:00+0553
Our weekend with Mohammed Azharuddin began early. We left Delhi for his constituency at six in the morning and got to Moradabad 12 hours later. We should have done the distance in three-and-a-half hours but we got diverted. We had just passed Garhmukteshwar's pink clock tower when Azhar's agent called to say that he was going to spend the morning campaigning for the Congress candidate in Muzaffarnagar. We were to wait for a black Ford Endeavour to pass us on the Meerut road and follow it. So we did. The next 10 hours were spent in Azhar's convoy as we drove through UP's countryside, the great rural flatland that even Hindi-speaking netas like to call the Interior.

Azhar in the Interior turned out to be one of the great comic turns in Indian politics. When the Endeavour stopped at a restaurant for breakfast, he emerged wearing shades, off-white jeans and a red T-shirt with the collar raised so high that it looked like a ruff. At the breakfast table he reluctantly agreed to be interviewed by a girl from India TV. "Two, three questions only," he stipulated in that word-swallowing mumble that cricket fans like me know so well from dozens of post-match interviews. "I'm here to work."

He was as good as his word. In short order and regardless of the interviewer's questions, he forecast that the Congress would win between 20 and 25 seats in UP, distinguished between cricket and politics by pointing out that cricket had a pitch but politics didn't, affirmed that he would represent not just Muslims but everyone in his constituency, and declared that he would play till the last ball was bowled. Then he left the table and disappeared into the four-wheel drive and got down to work.

The convoy grew as it was joined by Scorpios, jeeps and motorcycles. These were Harendra Malik's supporters, the candidate from Muzaffarnagar who had asked Azhar to help mobilise his Muslim constituents. Malik himself was inexplicably absent. Azhar's agent explained on the phone that his man was scheduled to do a 'roadshow' for Malik. Did that mean that he would address a series of small roadside public meetings? No it didn't.

It meant that some miles short of Sardhana, the town made famous by Begum Samru's church, Azhar was decanted from the Ford Endeavour and made to stand in a white, open-top jeep. Then the jeep was driven slowly down the road with an armed gunman standing by Azhar's side, motorcycle outriders making a racket ahead of him and police jeeps urging the convoy to stay on one side of the road. Azhar's job was to be the ornament in this moving tableau, to wave at the people thronging the road.

The trouble was that there weren't any people thronging the road. We were in the middle of rural UP flanked by deserted fields. The most animated person in this landscape was my colleague, Jitender Gupta, who startled Azhar by jumping on to the bonnet of the jeep to get the right angles for his photographs. Azhar waved tentatively, once, because the script called for it, then stopped, baffled by the indifference of the standing crop. Peering through the rear windscreen of my car I felt like a spectator condemned to watch an eternity of under-rehearsed slapstick.

Harendra Malik had still not arrived. After 20 minutes of inching along in a jeep, Azhar decided that he couldn't mobilise invisible voters for an absent candidate and disappeared into his air-conditioned SUV. If he was going to blush unseen and waste his fragrance on the desert air, better the air be filtered and climate-controlled instead of dusty and super-heated.

He nearly drove off in a huff, but a great deal of cajoling directed at his tinted window and the happy arrival of the missing Malik brought him round and we spent the next three hours bumping around the little kasbas of Malik's constituency.

I began to see why the Congress had parachuted him into Moradabad: in every lane we drove through, little bobbing rows of faces appeared to look at him through his rolled-down window, and going by the way they called his name, everyone knew who he was. That priceless political prize, recognisability, for which professional politicians work so hard, was his as if by right. And he took it for granted: he snapped at cameramen, scolded young men who wanted to touch him and managed to look continuously fed up. 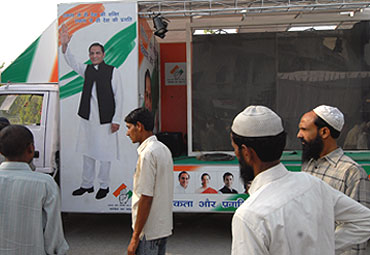 Poster boy: On the Congress-Sonia bandwagon in Moradabad

Just as Azhar was about to leave Malik's constituency to head back to Moradabad, his agent called to say that I could climb aboard the Endeavour and interview him. Is it a cover story? he asked. I prudently said that I didn't know. Cover stories were bigger than inside stories and size mattered to Azhar. "These small television channels keep asking for interviews. That television interview in the morning," he said, referring to the questions he had answered over breakfast, "was shot on such a small camera."

I asked him when he decided to get into politics. "Last October," he said. "My brother-in-law said to me, you've stopped playing cricket, you aren't doing anything else so why don't you join politics?" This was disarmingly candid and Azhar must have thought he had overdone the frankness. "To work for the people," he clarified.

He was appalled by UP's infrastructure, specially the shortage of power. We had passed several signboards in the afternoon, stuck in the middle of empty fields. One was a rusting sign that read 'Muslim Inter-College Sardhana'. There wasn't a building in sight, just the sign, rusting reproachfully. "I want to bring development here," said Azhar, shaking his head at the backwardness of his adopted constituency.

Trying to get away from the political generalities he had learnt by heart, I asked him if he still worked out. "Not while campaigning," he said. What was his optimal weight? "At six feet, I should weigh 75 kilograms with 10 per cent body fat." For his body he had targets; for Moradabad he had generic good intentions.

When we reached Moradabad, Azhar went straight into a public meeting made up of officials who represented Moradabad's sports associations. After speeches by local notables, Azhar sloped up to the microphone and promised non-stop development because, he said enigmatically, India has gone beyond the 21st century and Moradabad needed to catch up. He added that young sportsmen who had to queue up in the morning to use shared toilets couldn't concentrate on making the most of their talent.

The following day, he topped this by making a campaign pitch that consisted of cricketing figures of speech joined end to end. The venue was a vast private estate just beyond the Ramganga bridge. After introductory exhortations by Rita Bahuguna, the Congress candidate from Lucknow, and Parvez Hashmi, sometime transport minister in the Delhi government, Azhar came on to say that he was in politics to play a long innings, that he never gave up till the last ball, that he could play on any sort of pitch, and that his supporters in the audience were his teammates who needed to field well and take their catches, so that he and they and Soniaji and the Congress could win the match.

Remarkably, despite a rhetorical manner that verges on daftness, Azhar is a real contender in Moradabad. For a man who had been randomly shopping for constituencies (he fished unsuccessfully for Secunderabad in Andhra Pradesh, Tonk in Rajasthan and Meerut in UP before finding a billet in Moradabad), Azhar stumbled on to a seat that is a perfect fit for him.

Moradabad's Muslim voters make up nearly half its electorate. In the past, the BJP had won here because of divisions in the Muslim vote. This time round, the other Muslim candidate, the Samajwadi Party's Mohammed Rizwan, is handicapped both by his dodgy past and the fact that the SP has welcomed Kalyan Singh into its fold. Rais Ahmad, an autorickshaw driver I spoke to near Moradabad railway station, said categorically that Muslims wouldn't vote for the SP again because they held Kalyan Singh responsible for the demolition of the Babri Masjid.

The Bahujan Samaj Party's candidate is a Punjabi Khatri called Rajiv Channa, who used to be a BJP MLA before he defected. The BJP's candidate, seen as Azhar's principal rival, is Thakur Sarvesh Singh, whose base is Thakurdwara's upper-caste Hindus. In this scenario, Azhar's Congress backers believe that as a hugely famous Muslim celebrity, he is poised to sweep the Muslim vote.

"What about the match-fixing allegations?" I asked a local Congressman. He said that Azhar's rivals had so many criminal cases against them that Azhar's cricketing misdemeanours became irrelevant. It was evident, as we wandered around Moradabad, talking to brassworkers, businessmen and political rivals, that Azhar was seen as a serious candidate by voters in general and Muslims in particular. There was a real possibility that 25 years of electoral defeat and political decline for the Congress in this corner of Rohilkhand would be reversed by a surly, narcissistic, politically hapless ex-cricketer from Hyderabad.

Jitender and I marvelled at the prospect over tea at a dhaba on our way back to Delhi. Only in India.

(Mukul Kesavan's most recent book is The Ugliness of the Indian Male and Other Propositions.)