A Mere Figure Of Speech

What Advani said was nothing new. Jinnah's own speeches mirror his intent. Updates 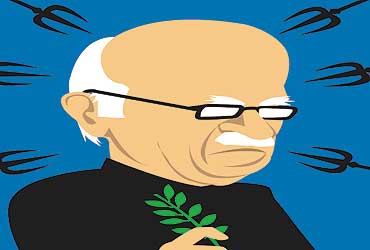 outlookindia.com
-0001-11-30T00:00:00+0553
Sitting in a pub at Heathrow airport while transiting through London, I found myself opposite two gentlemen about my age, who turned out to be Pakistanis from the frontier region, settled for four decades in England. After reminiscing about his childhood in Shivaji Park in Mumbai, which his family left in 1947, and telling me that Pakistan and India were like Hayes and Southall—one couldn't tell where one ended and the other began—one of them asked me, "Who exactly is Mr Advani?". When I told him, he said, "He has been saying some very nice things in Pakistan." And then added, in a tone bordering on wonder, "He is not at all a fanatic."

Without knowing it, Advani had made my day. When I went to The Hindu's website later and read that both the Vishwa Hindu Parishad and the Hindu Jagaran Manch had condemned him for describing Jinnah as secular and asked him to "go back where he had come from", my day was made again. In one masterly insinuation, Advani had sent a slew of messages that would make engineering a reconciliation between our countries easier.

The VHP and HJM are too fixated on Muslim-bashing to understand that Advani's remark was directed more towards Pakistan than his own followers at home. On August 11, 1947, Jinnah did indeed make the memorable speech, envisioning a secular Pakistan in which Hindus would enjoy equality of status with Muslims. But in the years that followed, Pakistan forgot that speech. After the late Zia-ul-Haq declared Pakistan to be an Islamic state, it was removed from school and college textbooks altogether. By referring to it, Advani reminded Pakistanis of the true aspirations of their country's founder.

The second message he sent through his remark was that neither he nor his party was prepared to demonise Jinnah any more or hold him solely responsible for Partition. It was a tacit admission that something else may have gone wrong too in 1946-47, that the Congress could have been as much responsible for it as the Muslim League. It is difficult to estimate the importance of this admission, but it opens the road to a dialogue about our common past essential for true reconciliation in the future.

By distancing himself (as A.B. Vajpayee had already done in 1999) from the BJP's earlier rallying cry of 'Akhand Bharat', Advani also made sure that Pakistanis did not think he was trying to turn the clock back. Taken together, his two remarks made it clear that he envisioned not a merger between the two countries but an amicable, fraternal relationship based on stable identities.

The last, and perhaps most important, message for the Pakistanis was that Gen Musharraf's trust in Dr Manmohan Singh was not misplaced, for it was not just the Indian premier but all of India that has had a change of heart.

Advani has also conveyed several unambiguous messages to the Sangh parivar. First, he has indicated, subtly, that his party supports the initiatives being taken by Manmohan Singh's government on relations with Pakistan and, so far at least, on Kashmir. He is thus backed not simply by a shaky majority in Parliament but a powerful national consensus. Second, he has served notice to the hard right in the parivar yet again that so long as he is around, the BJP will not resort to communal polarisation in a bid to come to power. He has thus deepened the isolation of the VHP, the HJM and other extremist elements in the parivar.

It's no surprise, therefore, that Hindu diehards have forced Advani into a showdown. They know that if they do not capture the party now, they never will. Advani has called their bluff. There is little doubt he'll win, but either way we have reached a fateful moment in the development of Indian democracy.

The VHP and HJM criticism of Advani is understandable.The Congress' is not. Its spokesman, Abhishek Singhvi, is wrong even on facts. Jinnah seldom passed up an opportunity to reiterate his opposition to the increasing communalisation of politics by other Muslim League leaders. When asked by a reporter during a press conference in November 1946, whether the creation of Pakistan would not poison relations between the two dominions from the very start, he lost his temper and said, "I envisage that India and Pakistan will be like two brothers, each coming to the other's aid when the need arises. Together we will forge a Monroe doctrine far stronger than that of the United States."

The fact that Jinnah led the campaign for a Muslim homeland did not automatically make him communal. He had made it clear from the start that his motivation was political, not ideological. What he was really looking for was a power-sharing arrangement between leaders of the Muslim and Hindu communities that would ensure the former weren't swamped some time in the future by a Hindu majority. Like any good lawyer, he pitched his initial demands too high and due to an inexplicable lack of direct engagement between him and Congress leaders, there was an absence of negotiation on his demands.

The subsequent functioning of Indian democracy has shown that the Muslim fears in the early '40s were unfounded. Given the power of minority politics, the Muslim League would have found itself being wooed by every aspiring political formation in an undivided India. But in 1947 neither the Congress nor the Muslim League had any real experience of democratic politics. Nor did they enjoy the benefit of hindsight. Whether or not Advani survives the test of confidence he has set himself, his statements in Pakistan have brought all of us a great deal nearer to closure on the saddest chapter of our checkered history.