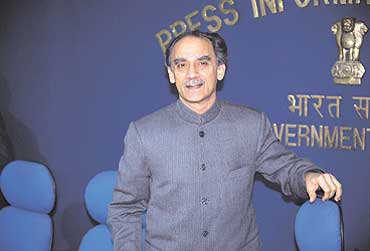 Will The Iron Fence Save A Tree Hollowed By Termites? Defence Imperatives Beyond The Military
By Arun Shourie
ASA/RUPA Pages: 474; Rs 595
Arun Shourie’s message is simple. India is besieged as a nation. Pakistan and Bangladesh are hellbent on destroying us. They are repositories of anti-India sentiment that is acquiring greater edge under the increasing influence of fanatical brands of Islam. They are powerfully aided by Muslim fundamentalists within our own borders. China single-mindedly wants to expand its power and is encircling India in every way it can. The war may not be visible but it is on, right on our territory. The weapons are unconventional: mass infiltration of Muslims in the case of Bangladesh, mass terror in the case of Pakistan. China will use every means it can gather to keep India weak and tied down to its backyard: from proliferating nuclear weapons to information warfare. Trust no one. The Americans have always thought of us as the Chinese do: a nation of deceitful whiners. The Russians will ally with Chinese power.

And all of their designs will be aided by weak and venial Indian politicians. They will encourage Muslim migration even if it will lead to another secession, they will turn a blind eye to terror because they are too unmanly to respond, they are too self-serving to even comprehend the nature of the Chinese threat. These politicians are ably aided by politically correct intellectuals, the kind that call Shourie paranoid, pamper minorities, and inhabit a dream world that makes the murder and mayhem our neighbours are inflicting invisible.

Shourie has redefined the concept of a book. Collect copious quotations to suit your argument. String them into a narrative that brooks no complications or explanation. See conspiracies everywhere. Punctuate the story by something that looks like analysis. This usually consists of repeating an accusatory question over and over: Who is going to do something about this? Pre-empt all criticism by labelling potential critics as anything from statistics-deniers to intellectual persecutors. Create a sense of authority by insinuating that virtue, clarity and determination resides only in Arun Shourie. Anyone who dares criticise him cannot possibly be serious about national defence; anyone who demands more methodological complexity is guilty of evasive obfuscation. How does one intellectually engage his argument?

But engagement with this book is necessary. Shourie is picking out phenomena like inter-country migration within South Asia that are real. It is bizarre to suppose, as he does, that this is all conspiracy-driven rather than a product of a very complex political economy. But it is important to think of alternative political solutions that address the problem, or the space will be colonised by people like Shourie whose idea of a solution is India on a dose of Viagra. Second, his arguments need to be answered or they will go unchallenged. Nobody denies the existence and potency of the isi, or the presence of fanatic Islamic groups in Bangladesh and Pakistan. But in the long run whether they will have the political upper hand is still an open question. Is the best political strategy for dealing with them promoting the kind of divisive politics on which they thrive? It’s like stringing together quotes from Sadhvi Rithambara and Narendra Modi, mixing it with images from Gujarat and the Babri demolition, and concluding that Muslims have no future in India. It is unconscionable that Shourie exempts Hindu nationalism from any scrutiny whatsoever. After all, his nightmare of a violent divisive India and the political prospects of his favourite adversaries, radical Islam, succeeding depend upon the fate of this movement.

The chapter on China is interesting as a hard-hitting, realist account of Chinese strategy. But here too there is a contradiction at the heart of his analysis. China, Shourie argues, has integrated into the world economy as part of a strategy of comprehensive national power, where it constrains its adversaries by making them dependent upon it. But why does this logic not equally apply to China? Yes, China is acquiring the wherewithal for warfare, but given its investment in the world economy, why will it not be constrained? After all, the constraints that interdependence poses are a two-way street.

Shourie is right that many of us are in an unthinking stupor. But India’s real tragedy may be that intelligent men, with integrity, courage, commitment, economic vision and potential for scholarship have given themselves over to a simple-minded politics of paranoia and sheer misanthropy.

Round One: All Square