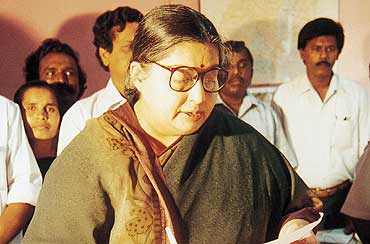 outlookindia.com
-0001-11-30T00:00:00+0553
Will the rejection of Jayalalitha's nomination papers by the returning officers in four constituencies generate a sympathy wave for her in the forthcoming elections? Predictably, the response is divided on political lines. But all agree that despite being technically out of the race, Jaya still remains the biggest roadblock for the dmk and its allies in the assembly polls.

As of now, Jayalalitha is in a hyper mode as she summons all the theatrics at her command to generate public sympathy. The chief burden of her speeches is that she's a woman wronged and that Karunanidhi had threatened the returning officers with dire consequences if her papers weren't rejected.

The dmk leadership, which is also combating dissent within its ranks and the impact of the mdmk walking out of the alliance, realises it has to strike a fine balance between personal attacks and criticism of the aiadmk as a party of corrupt leaders. Its leaders have been deliberately muted in their criticism of Jayalalitha. Any direct and personal attack, they feel, could boomerang so they've been toeing the 'law has taken its own course' line.

Amma, for her part, says she has full faith in the voters' good sense and that she will emerge victorious. Addressing a series of campaign meetings in Pudukottai after the rejection of her papers, she claimed Election Commission officials had "succumbed to pressure" from the state government. She repeatedly pointed out that even before the rejection of her nominations, Karunanidhi had claimed the papers would be rejected. "Karunanidhi might think he has gained a victory. But people will deliver a fair verdict," she said, appealing to her partymen to remain calm.

In Bhuvanagiri, aiadmk leaders, former state election commissioner K. Malaisamy and former Supreme Court judge V. Ramasamy staged a "walkout" at the office of the returning officer after accusing him of acting out of "bias". The aiadmk representatives wanted a day's time to explain some legal points in support of the nomination, but the returning officer, P. Santhanam, did not oblige them. Ramaswamy alleged that the attitude of the returning officer showed that the decision to reject the nomination was "preconceived". The aiadmk's line of argument is that the state government played dirty tricks to keep Jayalalitha away from the contest.

Notwithstanding her disqualification, the lady was at her arrogant best when she declared she was the chief ministerial candidate of the aiadmk-led front. Asserting that she would continue her poll campaign with redoubled vigour, she said the poll prospects of the front would not be affected by the rejection. Jayalalitha and her team are citing the case of Kerala politician R. Balakrishna Pillai's to justify their claim that the rejection is the handiwork of the state government. The High Court had confirmed Pillai's conviction, but the Supreme Court admitted his appeal and granted him bail. "When someone sentenced for five years can contest, how can we accept the ruling which denies the right to contest for someone who has been convicted for three years?" asks O.S. Manian, aiadmk MP and party propaganda secretary. However, he doesn't take cognisance of the fact that Pillai has immunity as a sitting mla while Jayalalitha does not enjoy this privilege.

The dmk, meanwhile, stresses that there is no sympathy for Jayalalitha. Asks Karunanidhi: "When the law has taken its course, why would there be a sympathy wave?" However the dmk front, aware of the potential of Jayalalitha assuming an aura of a victim, is fielding former Union finance minister P. Chidambaram to counter the charges. Chidambaram's brief is to explain the case in very simple language. He is to address meetings across the state in which he will explain the laws involved and put the case against Jayalalitha in a 'proper perspective'. Says Chidambaram: "It's a blatant myth-making exercise to state that there is a sympathy wave in favour of Jayalalitha. All she has done so far is to bend the law, how can you expect sympathy for such behaviour?"

Much will depend on how the dmk-led front's campaign unfolds in the weeks to come. As for Jayalalitha, by shifting the focus from her eligibility to pleading for sympathy, she seems to have won some points in what is being predicted to be a closely contested battle.

The Shape Of Things To Come