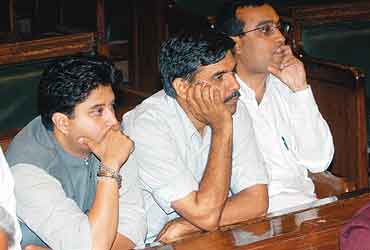 So it's been a let-down considering the party distributed 50 tickets to candidates who were below 40. "But there are a large number of experienced people at the top who had to be accommodated," explains party strategist Jairam Ramesh.

Some youngsters agree. "Young people should be given positions as ministers, but they do need some experience first," says 27-year-old Milind Deora, MP from South Mumbai. But others are surprised that neither Jyotiraditya Scindia, 32, who has already spent two years as the Guna MP, or Ajay Maken, 40, the former Delhi assembly speaker who wrested the New Delhi seat from BJP heavyweight Jagmohan, were not given ministerial berths. "We were hoping that Ajay Maken becomes a minister. It would have been good for Delhi," says another first-timer, 39-year-old Sandeep Dikshit. Yet others are downright upset. "In politics, it's not what you wish for, but whatever is decided for you by the party," rues one.