A Lecturer In Prison

There is strong inferential evidence to indicate that Gilani's ties with Afzal and Guru could be fully social and innocent. 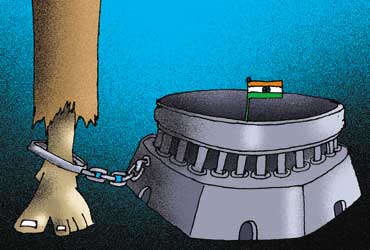 outlookindia.com
-0001-11-30T00:00:00+0553
While the Congress and the PDP inch towards forming a new government in Jammu and Kashmir, one lone Kashmiri sits in Tihar jail, accused of crimes for which, if he is proved guilty, he could forfeit his life, but without a shred of justification for his arrest or subsequent torture and interrogation. The case of Syed Abdul Rahman Gilani, who was a lecturer of Arabic at Zakir Hussain College and concurrently working towards a doctorate from Delhi University when his life was blown to bits, is just one more illustration of how Indian democracy has been hollowed out by 20 years of fighting terrorism. Over these years, the inadequacy of ordinary criminal law as a weapon in this fight has led to the passage of a host of draconian laws like the tada, its successor pota, the Disturbed Areas Act and Kashmir's Public Safety Act, which have put drastic curbs on the rights of the individual, in particular his right to habeas corpus, which is the cornerstone of the rule of law in a democracy. Gilani's case demonstrates how the tendency to progressively curtail the freedom of the individual has spilled beyond the boundaries of the militancy-affected areas and become commonplace in the so-called settled areas too, including even the capital.

Gilani is charged with being a part of the conspiracy to seize and blow up Parliament on December 13 last year. The other three alleged conspirators, arrested by the police and currently also facing trial, are Mohammed Afzal and Shaukat Hussain Guru of Sopore in Baramulla district, and the latter's wife, Navjot Sandhu, who converted to Islam and changed her name to Afsan. Both Afzal and Guru were registered as part-time students in Delhi University. Like Gilani, who also hails from Baramulla, they were living in Mukherjee Nagar in Delhi.

The case presented by the police against Afzal looks prima facie to be fairly strong. The fake identity cards of the four terrorists who attacked Parliament all carried a single contact number, that of Afzal's mobile phone. The police also claim that this phone was used to contact Ghazi Baba, on a satellite phone, in Kashmir. Baba is the chief of Jaish-e-Mohammad in India. Based on further interrogation, the police claim that Afzal was the principal contact with one Mohammad, the head of the terrorists. Two safe houses were allegedly rented in Mukherjee Nagar by Guru.

Gilani doesn't figure in any of this. The only evidence brought against him at his trial is that "from the study of printouts it also came to notice that all these mobile numbers (Guru's, Afzal's and Gilani's) were also in contact with each other just before the attack on Parliament on 13.12.2001". The police has no record of what was said. All they have is the fact that Afzal had phoned Gilani on December 9 and that Shaukat and Gilani had conversed twice on December 13 or the day before. The only additional 'proof' that police has produced is that Gilani received a phone call from Srinagar during which, talking in Kashmiri, he allegedly 'supported the attack on Parliament'. The chargesheet didn't mention what form this 'support' had taken.

By any yardstick this evidence, even if true, was extremely thin. Guru, Afzal and Gilani were all from Kashmir, all from the same district in Kashmir, all residing in the same small colony of Delhi and all at Delhi University. There were, therefore, a hundred reasons why they should have known and been in touch with each other. One of the more obvious was the approach of Id-ul-Fitr. More importantly, two translations of the conversation Gilani had with Srinagar showed that his cousin had called him to ask him to get syllabi and prospectus for courses in various colleges in Delhi, and that nowhere was there even an ambiguous reference to the attack on Parliament, let alone support for it.

But there were other anomalies in the case against Gilani that should have given any investigator reason for pause. For one thing, Gilani's was the only regular mobile phone connection in his own name. All the others were using sim cards purchased under a variety of false names. Second, two of the four slain terrorists had lists of five mobile phone numbers on them. Gilani's didn't figure among them. Gilani had resided in Delhi for 10 years. By contrast, Afzal, who is alleged to have made a recorded statement of his role in the attack, only came to Delhi from Srinagar in October 2001. Afzal needed a place to stay in Delhi and someone to help him make the necessary arrangements. He contacted not Gilani but Guru, who was his cousin. There was thus strong inferential evidence that Gilani's contacts with Afzal and Guru could be entirely social and innocent.

If the police still suspected him, the right course would have been to put him under surveillance and leave him free to lead them to other Jaish militants in the city. Why was he, instead, arrested, tortured unsuccessfully to extract a confession, hung naked before his wife and children, and calculatedly terrorised with murder by other prison inmates? Why has his life been destroyed and why are the police desperately attempting to prove a case that doesn't exist?

The answer is that over 20 years of incessant battle against terrorism in various parts of the country has made our security forces unaccountable for their actions. The police have become a law unto themselves and don't feel obliged to avoid disrupting a suspect's life and reputation without good prima facie cause. Pressured and harassed by political leaders and armchair bosses, they now believe in arresting people first and wringing a confession out of them, if one is to be had, by brute force afterwards. The confession may not stand up in a regular court of law, but that is precisely what the pota intends to remedy. This is the true face of the democracy of which we were once so proud.

No Con, All Fusion