A Lapse Of Marital Reason 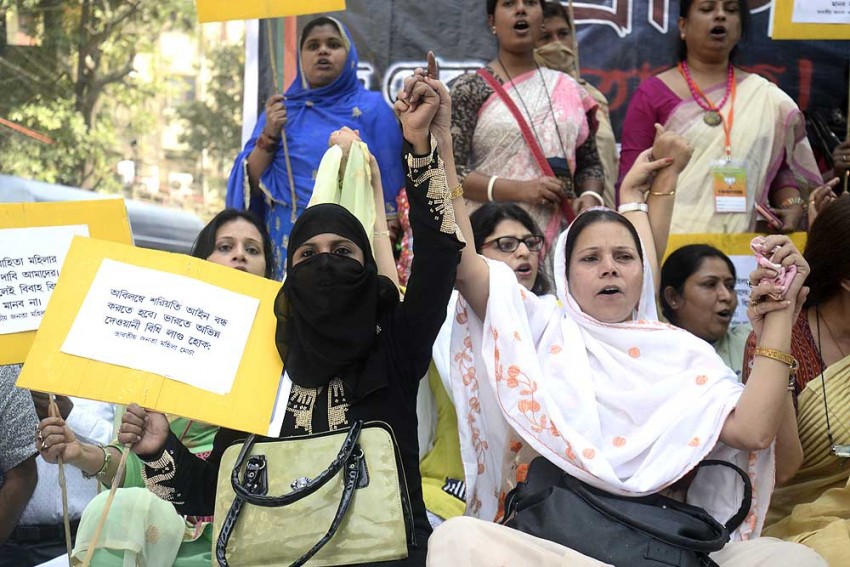 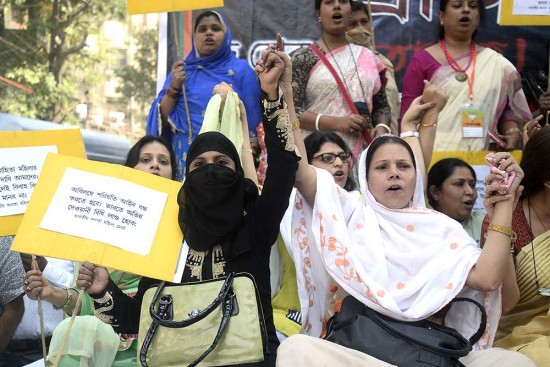 The Allahabad High Court obser­ved this week that triple talaq is “cruel” and unconstitutional. Triple talaq—or, more accurately, instant triple talaq—is a practice wherein a Muslim man ­pronounces talaq thrice in one sitting, thereby ending his ­marriage ­irrevocably. Though acc­ounts of its pre­valence vary, many Muslim women now stand against it as a dehumanising practice. The Bharatiya Muslim ­Mahila ­Andolan (BMMA), which has approached the Supreme Court seeking a ban on instant triple talaq and wants it declared unconstitutional, has found in a recent survey of 4,710 women, of whom 525 were divorcees, that 346 were divorced by instant triple talaq. That is an overwhelming 65 per cent.

“Our survey clearly shows that instant triple talaq is the most common way to end a Muslim marriage in India,” says Zakia Soman, a BMMA activist. “In a constitutional democracy, the legal framework should be such that nobody is discriminated against on grounds of gender. The All India Muslim Personal Law Board (AIMPLB) says this is a matter of social, not legal, reform, but our legal challenge doesn’t affect reform. In fact, it ­supplements reform.”

BMMA activists say the changes they propose are within the Islamic ­framework. “Instant triple talaq is not Quranic,” says Zakia Soman.

The problem with instant triple talaq is that leaves no room for reconciliation. That is why women’s rights activists and a large number of Muslims call it cruel. The correct procedure for talaq, Islamic jurists say, is to attempt reconciliation. Failing this, the husband pronounces a single talaq, revocable by him, within a fixed time per­iod—roughly three months. Beyond that period, the divorce kicks in, but the couple still has the option to ­remarry. This procedure can be undertaken twice in a lifetime. The third talaq pronouncement by a husband marks a final, irrevocable divorce.

Subsequently, the couple can remarry only if the woman marries another man and then divorces him. This process, called halala, is a more direct and immediate ­fallout in cases of instant triple talaq, which heightens the cruelty women end up being subjected to. 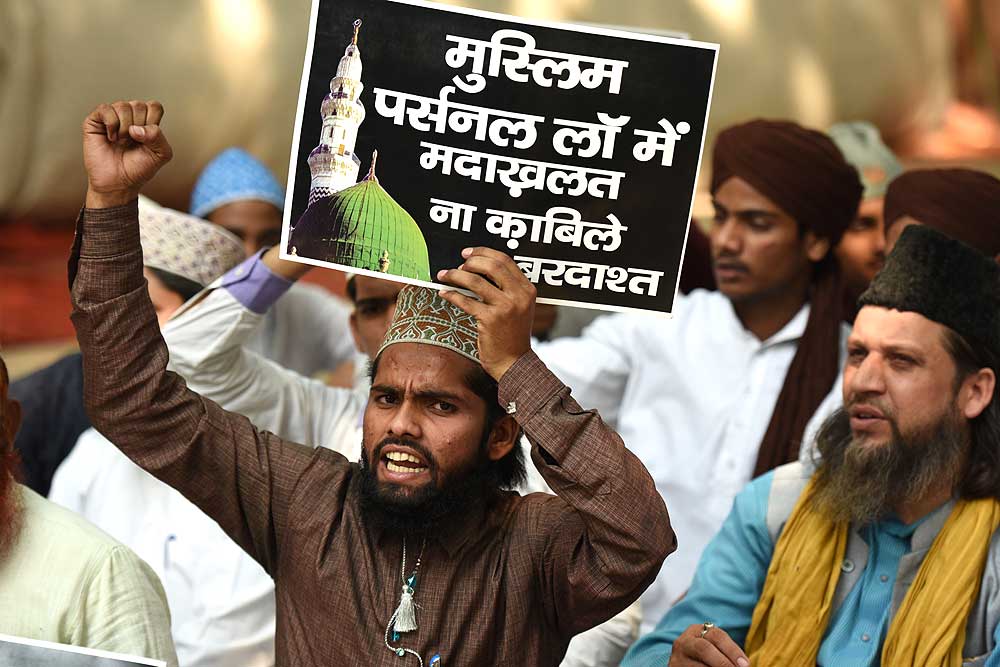 Courts have said—for instance, in the 2002 ruling in the Shamim Ara case—that if triple talaq is pronounced in one sitting, then it will be counted as one talaq only, which the man can revoke within the prescribed ­period. “The courts have not ruled triple talaq as illegal or unconstitutional,” says Saif Mahmood, an expert in Islamic law who practises in the Supreme Court. “This single talaq, too, should be declared unconstitutional.” In Islamic jurisprudence, he points out, the man has the right to talaq and the woman the right to khula, and, hence, “as the woman cannot revoke a khula, men too must not get the right to revoke a divorce.” The husband can discourage the wife to seek khula, but cannot deny her the right; he can only ask her to give up her mehr. “But most men think the only way to divorce is to pronounce talaq three times. They don’t know about khula or other ways,” says Mahmood.

One way to handle this, many feel, is to make the first pronouncement revocable, and an option for both husband and wife. “Or else, the Supreme Court should read down the provision for revocation of div­orce. Revocability by just the man violates the fundamentals of equality,” he says.

Rulings that triple talaq in one sitting amounts to a single, revocable talaq, apply only to states whose high courts have made these observations. Only the Supreme Court can make it binding everywhere. The AIMPLB, however, is in no mood to relent and continues to claim that Islamic jur­isprudence sanctions instant triple talaq and, even though it is improper, any law invalidating it would amount to State int­erference in personal law and ­endanger the freedom to pursue customary ­practices. This debate has pitted Muslims who want changes in personal laws that uphold and reinforce male supremacy in matters of mar­riage and divorce, against those who fear that such reforms could end up being just another means for the State to target Muslims.

“Many practising Muslims regard INS­tant triple talaq as valid, so declaring it unconstitutional would cause immense hardship,” says AIMPLB executive member Dr Asma Zehra. “A woman seeking maintenance or child support from courts would be told her divorce never took place.” Clarifying that instant triple talaq isn’t the only mode of divorce available to Muslims, she admits such divorces have sometimes shocked women, especially when pronounced via telephone or SMS. And yet the board doesn’t think the courts should interfere in this matter. “If one per cent of Muslims want instant triple talaq to be declared unconstitutional, then it would not be accurate to call it the community’s demand,” says AIMPLB member Zafaryab Jilani, who is a lawyer. There are indeed a large number of Muslims who see instant triple talaq as a social evil brought on by misuse of the men’s right to divorce, and believe it should be tackled through social reform.

“I have no problem with those who believe triple talaq is part of their belief. Let them practise it by mutual consent,” says Arif Mohammad Khan, a former Union minister  who quit the Congress in 1986, after the then PM Rajiv Gandhi spearheaded the passing of the Muslim Personal Law Bill in Parliament to overturn the Supreme Court’s decision in the Shah Bano alimony case, and ­resigned from the BJP in 2007. “But to say that it is applicable to all Muslims amounts to denying freedom of religion to those who hold triple talaq to be repugnant to the Quran and the prophetic traditions.”

Zehra and Zafaryab hark back to the ­seventh century, the second Caliph’s time, when instant triple talaq was considered “bidat” (not recommended)—a lousy thing to do, but nevertheless accepted as a way to provide relief to a woman who wished to exit a marriage quickly.

BMMA activists, however, dismiss these arguments as backlash from men against change. “The personal law board is politicking instead of supporting the rights of Muslim women,” says Zakia, referring to the AIMPLB’s ongoing effort to seek support from Muslims, via a signature campaign, for status quo on sharia laws. “They are telling people that our religion and identity are under threat, but they never took the trouble to educate people about Quranic teachings.” BMMA activists say they are not among the detractors of Islam who advocate a “Uniform Civil Code” and insist that the changes they propose are within the Islamic framework. “We have to educate people that instant triple talaq is not Quranic, that it is not legal,” says Zakia. “If the courts declare instant triple talaq unconstitutional, then Muslim women will have some recourse to justice.”

NALSAR Law University vice-chancellor Faizan Mustafa points out that triple talaq, being part of Muslim personal law, is not a law in reference to the Constitution and cannot, therefore, be declared unconstitutional. “Can the Indian courts today ­declare opinions voiced in the ninth century ­unconstitutional?” he asks.

If the Supreme Court lays down procedures for divorce, as over 20 nations have, it would give both sides access to reconciliat­ion and mediation. Both would think through the decision—in particular, the man who holds the most cards. The cases before the court are going, as Mahmood says, “step-wise”. They simply seek an end to instant triple talaq. Only when both men and women get equal rights to divorce—or reconcile—does the battle really end.