A Land Of No Return 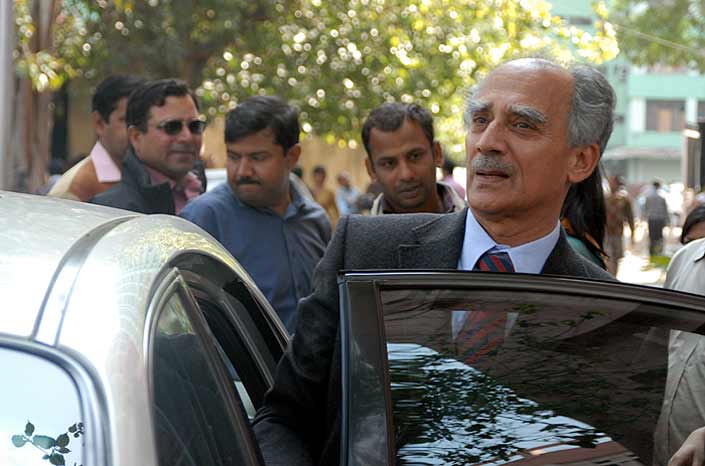 On March 15, Kapil Sibal, the Union minister for communications and information technology, announced an inquiry into the disinvestment of VSNL in 2002 in favour of the Tatas by Arun Shourie, then disinvestment minister and later telecom minister in the NDA government. Outlook, in its March 28 issue (Acrepolis: A Plot Hijacked), had exposed how Shourie had failed to demerge 773.13 acres of surplus land from VSNL before divesting. Sibal’s order stated, “Prima facie, the way the issue of the demerger of 773.13 acres of surplus land of VSNL was handled in 2002, not only the interests of investors but also the interests of the government seem to have been adversely affected”.

Worse, even as Shourie maintained that the land belonged to the government and the original shareholders, the Tatas have already transferred 32.2 acres of the surplus 773.13 acres to the VSNL Employees Cooperative Housing Society, Chennai, following a Delhi High Court order. This, even as the VSNL board was deliberating on the “legality and feasibility of implementing” the demerger of the land. The “process of transferring the said land to the society was completed during the year (2009-10),” according to the director’s report of 2010.

When bids were invited for VSNL’s disinvestment in 2002, the Tatas and Reliance both responded. The Tatas eventually won the bid on February 1, 2002. A share purchasers’ agreement was signed four days later, followed by a shareholders’ agreement on February 13. It was in these agreements that pro-Tata clauses on the land were worked in.

However, Shourie was not alone in ensuring that the land stayed with VSNL. Documents accessed by Outlook show that his successors in the telecom ministry, Dayanidhi Maran and A. Raja, also failed to protect the interests of the government and investors. They were at best not interested in a demerger, or at worst, keen to give away the land to the Tatas.

Meanwhile, Shourie reacted to the Outlook story and has given interviews offering reasons for his failure to demerge the land. Coincidentally, his explanation is exactly the same as that offered by the Tatas. The facts, however, tell a different story. For instance:

Shourie’s version: He says in an interview to The Economic Times on March 23 that had they attempted to separate the land before the disinvestment, “the shareholders will immediately take you to court and the whole process will be stopped”.

The Facts: If Shourie claimed demerger was a difficult issue before disinvesting in VSNL, wouldn’t it become even more so after the government gave up its stake in favour of a private company? Shourie’s fears of being challenged in court were without basis to begin with. And even if a legal challenge did come up, what was more important—protecting the interests of the government and shareholders in the land, or disinvestment? And going by his logic, a demerger now can still be challenged in court by the same foreign investors.

In fact, Shourie’s ministry had hired a law firm with US-based associates for a legal opinion. M/s Dua Associates didn’t see a problem with demerger, saying VSNL shareholders and ADR holders in the US could “receive net cash proceeds (according to their shareholding)” from the new company holding the demerged land. It also said the net proceeds from the land could be given “as an extraordinary dividend” to the US investors.

Documents accessed by Outlook clearly show that Shourie’s fears were unfounded. A Telecom Commission meeting held on December 19-20, 2002, clearly dismissed such apprehensions on the land demerger. Though the meeting was held after the disinvestment, its observations clearly applied to the company before it was privatised. In its meeting, the commission noted that “though VSNL stock is listed on the New York Stock Exchange, the shares are also held by a large number of shareholders in India and as the surplus land is not the property of VSNL, the propriety and necessity of seeking legal opinion seems doubtful”.

And even if Shourie’s fears of litigation were true, it would have meant the land would continue to rest with vsnl. So was Shourie building up a case for ensuring that the Tatas retained the land?

Shourie’s version: Both he and Tatas claim they would have had to pay stamp duty for demerging the land.

The Facts: The seller (VSNL in this case) never pays stamp duty. It would have to be paid by a prospective buyer.

Shourie’s version: In the same ET interview, he says “at that time Tatas said, we want to demerge”. Had in an official communication also stated “the company has been seeking an expedited resolution to this issue”.

The Facts: Outlook is in possession of six letters written by the Tatas to the government (and Shourie) stating there were problems with the demerger. And far from offering a quick settlement to the issue, it began creating problems. Further, in a letter on April 30, 2004, the Tatas refused to pass a board resolution in favour of giving up the land. Then, they quickly added the offer to retain the land, instead of a demerger. From 2003 to 2007, the company was consistent in delaying the sorting out of the land issue as well as, in fact, demanding that they be given the land.

Shourie’s version: Claims there were “stringent clauses” in the shareholders’ and share purchasers’ agreements preventing Tatas from claiming land.

The Facts: There were clauses, of course, stating that the land would not belong to the Tatas, but they were hardly stringent. Clauses become stringent only if there is a penalty clause in the agreement. What if the Tatas were to renege on the agreement? What would the government do? None of this was factored in.

And the Tatas have already violated the agreements. Contractually, they were bound to “not directly or indirectly do any act which may adversely affect or delay the hiving off or demerger”, but Shourie never called them to task. The shareholders’ agreement did have an arbitration clause, but again Shourie never invoked it.

Shourie’s version: Says Ratan Tata wrote a letter “to me” saying “let us go into arbitration (over the land)”.

The Facts: The letter marked personal and confidential from Tata, published in Outlook last week, certainly doesn’t mention arbitration. On the contrary, it says that because of the problems in demerger (ironically created by the Tatas themselves), they should be allowed to retain the land by paying 45 per cent of its original cost (Rs 151 crore).

What Shourie has also been unable to explain satisfactorily is why the precedent set by the IBP divestment was not followed, where its subsidiary Balmer & Lawrie was demerged. Shourie’s defenders have also said demerger is a complicated process involving a lot of time. But the Rs 1,00,000-plus crore worth Reliance Industries was demerged in just seven months (after the Ambani brothers split). Would the demerger of VSNL land valued at Rs 151 crore have taken longer?

Shourie’s role seems suspect from another angle. After he took over as telecom minister in January 2003, Pramod Mahajan was ousted from the ministry. The latter had protested the Tatas’ move to take out nearly Rs 1,200 crore from VSNL to fund their telecom venture. The BJP had issued a statement criticising this and said that it brought the process of VSNL’s disinvestment under a cloud. 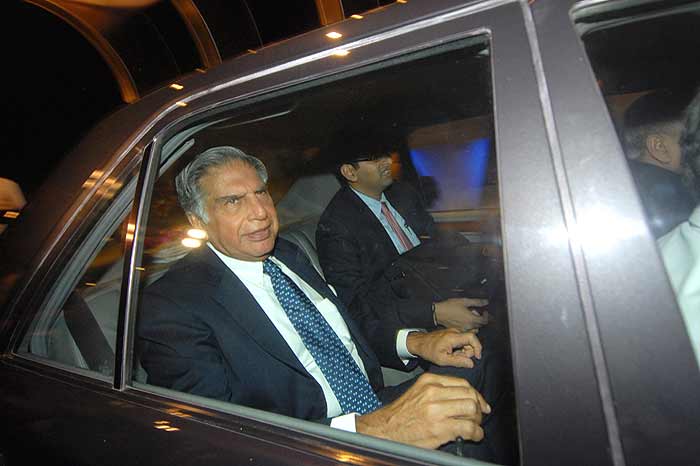 However, if anyone had hoped that all this would change with the change of government, it wasn’t to be. After Dayanidhi Maran took over as telecom minister in UPA-I, things took a turn for the worse. In a meeting on March 13, 2007, the minutes of which are available with Outlook, Maran directed his officials to get further details on only one option for the surplus land—that the Tata-owned VSNL retain it. “The Hon’ble minister gave ‘directions’ to know further details of retention of land by VSNL.” The other alternatives, to demerge the land into a separate company or auction it, were simply not taken into account.

The land-to-stay-with-the-Tatas alternative continued to be the most attractive option even under the now disgraced ex-telecom minister A. Raja. A telecom commission memo prepared on May 20, 2009, clearly favoured giving the land to the Tatas. It listed several arguments in favour of this. Ironically, the main argument against giving the land was that “this option may invite public allegation as the land is in the control of VSNL, and VSNL is now controlled by Tatas”. So, the ministry clearly knew such a move would be controversial. It also confirms the fact that had Shourie demerged the land, none of these complications would have arisen and public interest would have been protected.

At this point, it’s pertinent to examine the part played by the then disinvestment secretary Pradip Baijal. In his book Divestment in India, Baijal describes VSNL as the “perfect disinvestment”. However, his role in aiding the Tatas expand their telecom business is already under the scanner. In December last year, Raja filed an affidavit in the Supreme Court alleging that the former disinvestment secretary and trai chairman had acted out of turn to help the Tatas in expanding their telecom business. Baijal later joined Tata lobbyist Niira Radia to set up strategic consulting firm Noesis.

Earlier, in 2006, after delaying the demerger for four years, the Tatas began to create a shell company to transfer the land. The agreements had said that the government would create this company, but the Tatas did the job instead. Reacting adversely to the move, the Planning Commission, in a secret note (D.O. No. M-13040/26/2006-C&I dated May 12, 2006) forwarded to the telecom ministry, pointed out that “it is not clear why the entire exercise is being driven” by the Tatas. “If the land belongs de jure to Government of India/department of telecom then there is no question of the transfer of the same to the shell company”.

So, while disinvestment per se has had positive fallouts and made the telecom sector a model of efficiency, questionable decisions such as these and the failure to demerge 773.13 acres of land, the benefits of which could only have flowed one way, cast a shadow over the exercise. Sibal’s inquiry perhaps will shed some light and make the doubts melt away.

Beauty Won’t Save The World