A Khaki Shudra To Our New Brahmins

How is it that the Maoists accumulate so much sympathy while the police are damned by the uniform they wear? 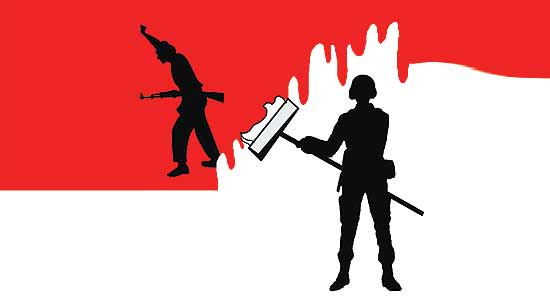 I’m aware that I suffer from multiple handicaps as I stand to defend myself and my police force for planning and executing ‘Operation Green Hunt’ against the Maoist insurgents in the dense jungles of Bastar. I’m acutely aware of the truth of a metaphor I flippantly coined many years ago—that in India’s transformed caste system of today, a policeman is a Shudra, someone to be ridiculed, shouted at, spat upon. Over the years, I have expanded the Shudra label to include writers, poets, intellectuals, journalists and teachers from mofussil towns—what I mean is, those who essentially know and think in Hindi or other regional languages of India. And, by extension of that metaphor, who are the Brahmins? The Anglophile Indians are the Brahmins—those who write and think in English, those who teach in the colleges of Delhi and other big cities. And I, unfortunately being a Hindi poet, can only claim to be a counterfeit poet. Therefore, as policeman and Hindi poet, I’m a double Shudra.

According to ancient Indian jurisprudence, as a Shudra, my evidence is of little value. A Shudra’s cry is a cry in the wilderness. An allegation against a Shudra needn’t be proved; it’s the Shudra who must prove his innocence. Despite the heavy odds, I must still defend myself and my force.

I would like to begin with what Operation Green Hunt is all about. It should not be confused with the operation launched jointly by the central police organisations and the Chhattisgarh police in specific areas of Bastar.

The second task was to identify and take control of ambush points favoured by the Maoists. This, too, has been largely successful and police casualties have dropped dramatically.

The third task was to conduct intelligence operations to help break up Maoist camps, where cadres are trained in military tactics and field manoeuvres. And our final goal was to win over the minds and hearts of people by organising jan jagaran meetings at weekly tribal markets. They were meant to wean away tribals from the Maoist ambit of influence. From meetings at weekly markets, we expanded the programme into jan jagaran abhiyans in the towns and villages.

What seems to have angered the Maoists the most about Operation Green Hunt are the last two goals. They realised the police programme was effective and villagers were sharing their concerns with the police. So they reacted in the only way they know—by stepping up the terror tactics. Many innocent tribals were killed after having been declared “police informers”. But the Maoists soon realised this was becoming counter-productive, for it was making people respond favourably to the jan jagaran abhiyan.

They changed tactics. The police have since August 2009 been receiving credible intelligence about Maoist designs to oppose Operation Green Hunt by killing tribals or committing other atrocities and then blaming the security forces.

The truth about these inputs was confirmed in a letter dated September 10, 2009, issued by the subcommittee of mass organisations (SUCOMO) of the CPI (Maoist) and seized by the police. The party asked its mass contact groups to launch propaganda at the all-India and state levels about alleged atrocities committed by the security forces. It said such propaganda should include criticism of efforts to crush the revolutionary movement through massive deployment of force. It encouraged flexible methods—from agitations to seminars and signature campaigns—and sought to influence sympathisers into bringing pressure on the upa government, the US, and Indian embassies abroad, all aimed at getting Operation Green Hunt called off.

It isn’t hard to see why criticism of the Salwa Judum at the national and international levels increased after the CPI (Maoist) politburo decided in April 2006 to hit it in all ways. It isn’t hard to see either why the attack on Operation Green Hunt has increased after the SUCOMO letter of appeal and instruction. These two ‘soft’ strategies have resulted in the state and its police officers being dragged to court.

The Supreme Court is hearing the petition of Sodi Sambo, who was shot in the leg, allegedly by a security personnel, so it will be wrong on my part to comment. But let me state that the Chhattisgarh police is not generally known for fake encounters or killing of innocents. If it believed in extra-judicial killing, the prisons wouldn’t be full of arrested Maoist leaders and cadres. This isn’t to say occasional aberrations might not occur. Whenever such instances are brought to the notice of SPs, action has always been taken: in Bastar alone, 25 cases have been registered against police officers and spos from 2005 on. Only a few of these were registered on the directions of the NHRC. Ten have already resulted in chargesheets, with the accused cops being sent to jail. Some cases pertain to rape, murder, rioting. If such cases against policemen could be registered, investigated and taken for trial by local police, how can one accept that the Chhattisgarh police acts in partisan manner? Individual aberrations cannot be drawn to brand the force a “bunch of hoodlums”.

My police will continue its battle against the Maoist cadres. We will fight them on the ideological plane as well as on the field out of our belief in a liberal socialist democracy and the rule of law. We are bound by oath to protect the Constitution of India. We will fight because the fight has been forced on us by a group that openly declares in its book, Strategy and Tactics of Indian Revolution, that “the seizure of power by armed force, the settlement of the issue by war, is the central aim and highest form of revolution”. If this is their main aim, it leaves the security forces very few options. The only difference is that we will be fighting within the constraints of the law of the land, while the Maoists are free to use both legal and illegal means. We have accepted this and will still fight anyone who intends to jettison our Constitution and replace it with a totalitarian system of whatever shade.

To the metropolitan Brahmins, my assertion may be of little value. A Shudra’s testimony is a cry in the wilderness.

(The author is director-general of police, Chhattisgarh.)

The Good Muslim In Eternal Return