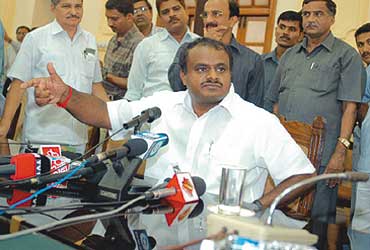 outlookindia.com
-0001-11-30T00:00:00+0553
Karnataka chief minister H.D. Kumaraswamy is in trouble again and, as usual, it’s his loose tongue to blame. At a recent press meet, he came out and alleged that even before he was CM, a senior journalist and a minister in the former Dharam Singh government had approached him on behalf of the nice company—executing the controversial Bangalore-Mysore Infrastructure Corridor (BMIC) project—and tried to "buy" him. But being the "good son of the soil", he had resisted the temptation.

This charge, of course, has infuriated the main Opposition Congress which stalled the ongoing assembly session demanding that the CM reveal the name of the guilty parties or be charged with relevant IPC sections for collusion. The Congress belligerence, plus a recent revelation that the CM owns 43 acres of land in the bmic project path, has literally pushed him into a corner. Kumaraswamy was planning to take over the project through a state legislation after an SC verdict went against the government.