Protest there is but also concern for diaspora interest 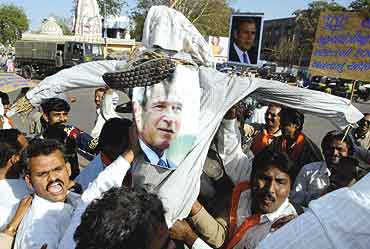 outlookindia.com
-0001-11-30T00:00:00+0553
When Narendra Modi starts talking of Mahatma Gandhi, apostle of non-violence, he has to be in some trouble. At a Swabhiman (self-respect) rally in Ahmedabad after he was denied a visa to enter the US, he thundered: "The US administration should remember that it was a frail Mohandas who was thrown out of a train in South Africa. But this man later threw out the British from India. America is scared of Gujarat, of a gas pipeline from Iran to India that will run through Gujarat. The day is not far when Americans will clamour for a visa to Gujarat. Don't underestimate the Gujarati."

But the Americans clearly did not estimate this particular Gujarati very highly and stuck to their decision to refuse him entry to their country. The fact that Modi still has a visa for the UK is being presented as a face-saver. (He will visit the UK on March 26 to attend the Gujarat Day celebrations organised by the Asian Music circuit). But the British government will stick to its stand of having no government or protocol contact with Modi. Clearly, the man continues to be persona non grata for many across the world.

What's more, his own Gujarati community is uneasy with the BJP's anti-American stance. With the Indian government, including Prime Minister Manmohan Singh, having registered a protest against the denial of a visa to a constitutionally elected Indian public figure, the standoff has actually become BJP versus the US. This makes many BJP and Modi supporters deeply uneasy.

Krishnakant Vakharia, president of the Vishwa Gujarati Samaj, a powerful body of the Indian diaspora, has issued an appeal to the BJP and its affiliates like the vhp and Bajrang Dal to exercise caution and not take an aggressive stance towards the US. Pointing to the Ahmedabad rally, he says that burning US flags and effigies of Bush will hardly serve India's cause. "One should not forget that of the 12 lakh Indians in the US, five lakh are Gujarati and their interests should be kept in mind. I believe that the prosperity of Gujaratis in America is because of America, not the other way round," he says.

Many businessmen settled in Gujarat but with relatives in the US agree. Says Chirag Shah, an Ahmedabad-based businessman, "This controversy should not be stretched so far that it hurts the interests of Gujaratis at the global level. If Modi continues with his usual Mian Musharraf speeches, accusing Bush of conspiring with him to keep Modi out, it will affect the image of Gujarat across the world and will harm the Gujarati diaspora."

Gujaratis are such a business-savvy community that Modi will have to be cautious on this issue. While his natural inclination would be to resort to hyper Gujarati jingoism, this may not go down well in the state. Over two years after he received the huge mandate, Modi may still be the single-most popular leader of Gujarat. But the shine is beginning to dull, judging by the poor response his Ahmedabad rally attracted where less than 15,000 people turned up in a ground which could hold 35,000.

Nor has the visa issue quelled the dissidence in the state unit as the BJP had hoped. Instead, the rebels are emphasising that this does not dilute their campaign against Modi. Former CM Keshubhai Patel and other senior leaders and MPs in the anti-Modi camp were conspicuous by their absence at the rally. Said a senior BJP leader: "The rebels' refusal to attend the rally sent a strong message to Advani." In fact, he was the only one along with Arun Jaitley and nda convenor George Fernandes among the national leaders to have attended the rally. And it's not due to ideological differences with Modi within the BJP but personal animosity. Says a BJP general-secretary, "Modi is disliked by most of us as he is arrogant and can become unpleasant."

Meanwhile, in Delhi, Prime Minister Manmohan Singh's inadvertent endorsement of Modi while protesting the visa denial has embarrassed the Congress. Many senior Congress leaders say the protest should have best been left to the mea and the PM should have refrained from giving a response. They recall how the Congress paid dearly for Narasimha Rao's failure to protect the Babri mosque, as Muslims turned away from the party. Union textile minister Shankersinh Vaghela was the only one to be openly express his happiness: "A criminal is in the CM's chair. The US must have had good reason." But party spokespersons dismissed this as his personal opinion. Anand Sharma in fact tied himself in knots trying to defend the PM's statement that the US should not have used "allegations" to make a "subjective judgement to question a constitutional authority in India."

Perhaps. But this particular "constitutional authority" has been rapped on the knuckles by our own Supreme Court of India, and more than once.