Vegetable waste into energy? Chennai has taken the lead in exploring this renewable resource. 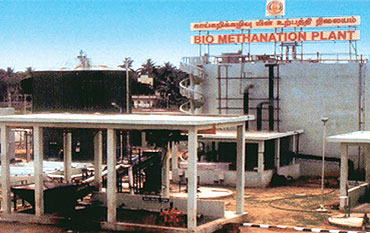 outlookindia.com
-0001-11-30T00:00:00+0553
Vegetable waste into energy? Chennai has taken the lead in exploring this renewable resource. Set up in September '05, the public-private partnership still faces snags—but shows a way out in dealing with urban waste. The Rs 5.5-crore Koyambeedu bio-methanation plant crushes vegetable waste and feeds it into an anaerobic digester where gas—65 per cent methane, 35 per cent carbon dioxide—is made. When transferred into a gas-holder, it operates an engine that produces electrical energy. Bio-fertiliser is a byproduct. The Chennai Metropolitan Development Authority (CMDA) allotted the land and 25 per cent of the plant cost, while a Rs 3.75-crore grant came from the Union ministry of non-conventional energy sources. Global tenders were invited and Enkem Engineers, the Indian licensee of Austrian firm Entec UgmbH, bagged the contract. The Tamil Nadu Electricity Board buys the generated electricity at Rs 3.15 per unit—ironically, it sells power to the plant at Rs 8 per unit. N. Elango of the CMDA adds that a two per cent line loss is one of the few disadvantages. When run at optimum level—30 tonnes of waste with a 22 per cent solid concentration for 20 hours—the plant can yield 5,000 units of power a day. But, post-segregation, only 15 tonnes of solid waste is available. So the plant now gives only 700-1,000 units for the six hours operated everyday. Rues Elango: "The quality and quantity of waste has defeated me." Not to worry, tender inviting bids for 15 tonnes of garbage a day to make up the deficit will be floated shortly. Meanwhile, Chennai Corporation is exploring conversion of hydrocarbons in plastic to energy to tackle the 450 tonnes of plastic waste.