Home  »  Magazine  »  International  » mYANMAR POLLS »  A Free Vote For The Lady Of Liberty?

A Free Vote For The Lady Of Liberty? 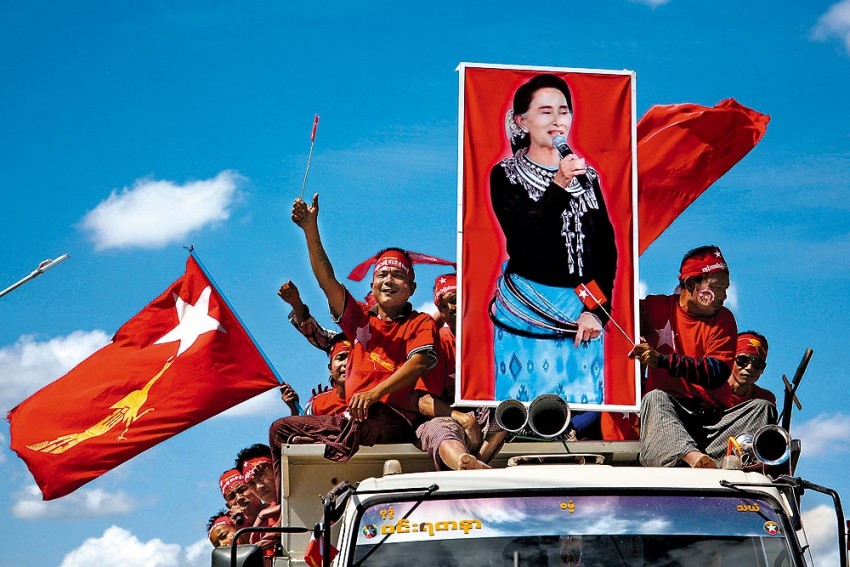 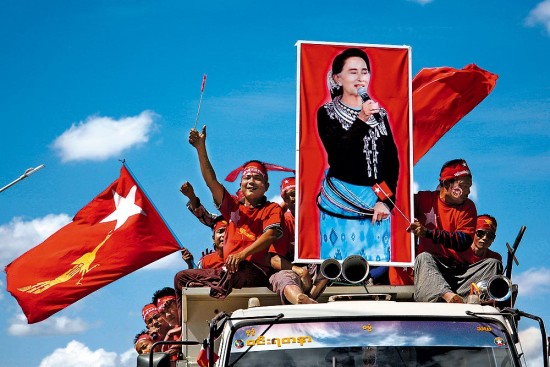 Now in the final few days of the election campaign in Myanmar, who will win the fight to control the country’s future and who will emerge as the president after the polls on Sunday are big question marks. Although there are 93 parties contesting these elections, the real battle is clearly between the hugely popular National League for Democracy (NLD) and its charismatic leader Aung San Suu Kyi and the ruling Union Solidarity and Development Party (USDP) nominally led by the current President, Thein Sein.

Here in the commercial capital, there seems to be only one visible party—the NLD. Last weekend tens of thousands of supporters turned out to see the Lady—as she is called here—on the outskirts of Yangon, to give her final campaign address. The area was awash with red shirts and flags, the colour adopted by the NLD as part of its symbol. This election is a huge opportunity for change. Such opportunities are rare in history, the 70-year-old leader told her supporters. “To seize and use this opportunity is the duty of all citizens. By using this chance correctly, we all will get a chance to found a genuine, democratic, federal country.” She was given a rapturous reception by the residents of the city, gathered to show their backing for the party that won the last free and fair elections in 1990, but were not allowed to form a government. “This time will be different,” says Win Lwin, a taxi driver from north Yangon, at the rally with his young son and wife. “We hate the military, it’s now time for us to show them how we feel.” “The NLD will develop the country and end discrimination,” says another supporter, Ahey, a Muslim whose family has lived in Myanmar for more than three generations. The fact there are no Muslim candidates contesting the elections for the NLD does not deter him. “Only Aung San Suu Kyi can guarantee dem­ocracy, peace and communal harmony,” he says.

Under the constitution she cannot become president—she is barred from the post because her children are foreign nationals—even if the NLD wins a landslide. But as she said in an interview with India Today a few weeks ago, if her party wins the elections, she will be the power behind whoever is elected president.

The NLD campaign, ‘Time for Change’, certainly captures the prevailing mood all across the country. The NLD leader, as she crisscrossed the country campaigning in the last two months, has stressed that the party not be judged on the quality of the constituency candidates, and that voters must opt for the peacock flag and its leader. The party manifesto and policy platforms will not be crucial in deciding the outcome, according to Han Tha Myint, one of the senior members of the party and chief political advisor. “Our trumpcard is the Lady, and people will vote for her,” he told Outlook.

“Our motto is a vote for the NLD, is a vote for Aung San Suu Kyi,” says Win Htein—currently an MP, and very close to the NLD leader. “Sixty per cent of the reason I won the byelection in April 2012 was Daw Aung San Suu Kyi’s support,” the NLD MP told Outlook last week. “And her visit to my Meitikla constituency during the campaign was decisive,” he added.

Being personality-centric is perhaps kos­her when the figure already stands for a strong idea—besides being the best guarantor of victory. According to the party’s own polls, as many as seven out of 10 voters across the country will vote for the peacock on Sunday, Win Htein confidently predicts.  This would give the party some 67% of the seats being contested and a narrow majority in the two houses of parliament—since 25% of the parliamentary seats are reserved for soldiers who are in turn nominated by the commander-in-chief.

For its part, the ruling Union Solidarity and Development Party (USDP) has been surprisingly absent from the streets of the two main commercial towns­—Mandalay in the center of the country and Yangon. Very few people attend their rallies, according to    political analysts and civil society organisations closely watching the election campaign. But their absence from view should not be seen as a sign that the NLD will win the election by a landslide, says Kyaw Lin Oo, executive director of the Myanmar People’s Forum. The USDP is totally under the influence of the military and they will control the election of the parliament and the president afterwards, he warns.

The most significant hurdle facing the NLD is the possibility that the election will not be free or fair. There are increasing concerns that the regime is planning quiet manipulation, des­pite more than 8,000 local and int­ernational monitors who have fanned out throughout the country to observe the campaign and vote.

The USDP is confident it will get the numbers needed to control parliament: they only need around 167 seats in all (from the 330 seats being contested in the lower house and the168 seats in the upper house) so that with the help of the military MPs they can carry on as a majority. The party’s election strategy has been quite clear: by concentrating on the township level­—and selecting those constituencies where they have a strong support base—they believe they can also muster the backing of important local institutions that can help influence the outcome of the vote. “There we have good relations with the senior monks, the leading businessmen and the local Government Administration Department—and they will secure the vote for us,” says a USDP MP who declined to be identified. An ominous remark, for the GAD will supervise polling stations across the country.

As part of this strategy, the monks, members of the Ma Ba Tha, an org­anisation working for the protection, preservation and pro­­­motion of religion and race, have emerged as the leading tool of management. “In the rural areas particularly, the senior monks are very influential. What they say is like an order,” says Yan Myo Thein, a political commentator and former political prisoner. And already they are having a significant impact on voters, throughout the country.

Monitors from the US-based election watchdog, the Carter Center, established by the former American president Jimmy Carter, has already raised serious questions, pointing especially to the “potentially disruptive use of nationalist and religious rhetoric,” in its initial report released last week. Apart from the monks, the village headmen are also powerful players in the rural areas, commanding a lot of respect,  and will be instrumental in quietly puppeteering the vote in favour of the USDP. “In the rural areas the village leader still rules as a virtual lord,” Kyaw Lin Oo tells Outlook. “Fear and ignorance are still very high in the country villages and they’ll be influenced by the local hie­rarchy,” he despairs.

So by exploiting the rural peoples’ fears, ignorance and prejudices, the USDP still hopes to secure a favourable election result right now, despite the overwhelming popular support Aung San Suu Kyi and the NLD appear to enjoy—especially in the cities. The USDP candidates, especially government ministers contesting in the elections, have also been lavishing gifts on villagers —satellite dishes for every household and tractors for the villages, paid for by the wealthy businessmen in the region, according to civil society activists monitoring the election. In the end, therefore, one of the likeliest outcomes may be a hung parliament, with the NLD being the largest party in parliament—though perhaps with a majority in the lower house—but without an absolute maj­ority overall. A hung parliament and coalition government means the NLD will have to count on the other smaller parties and the ethnic groups in parliament to put Aung San Suu Kyi in the driving seat to elect the president, form the government and push for constitutional change.

“She needs the nationalities to be able to do anything in parliament,” Khun Htun Oo, leader of the Shan Nationalities League for Democracy (SNLD), said in an interview with Outlook this week. “We’ll support her; we won’t haggle with the military.” But the NLD’s aggressive stance in some ethnic areas during the campaign alienated other parties, some of which are now adamantly opposed to the NLD.

But there is no doubt that the ethnic areas which return more than a third of the seats being contested in the lower house and half  of those in the upper house will be determining who is elected the next president, and who is included in the next government. But whatever happens after the elections, everything depends on how many seats the Lady and her party can muster during what will most certainly be an extremely charged moment for Myanmar.

By Larry Jagan in Yangon

What Shall We Love?