A Food Strike, Not Hunger

Post-UP loan waiver, Maharashtra farmers demand their due, and are refusing to budge until they get it 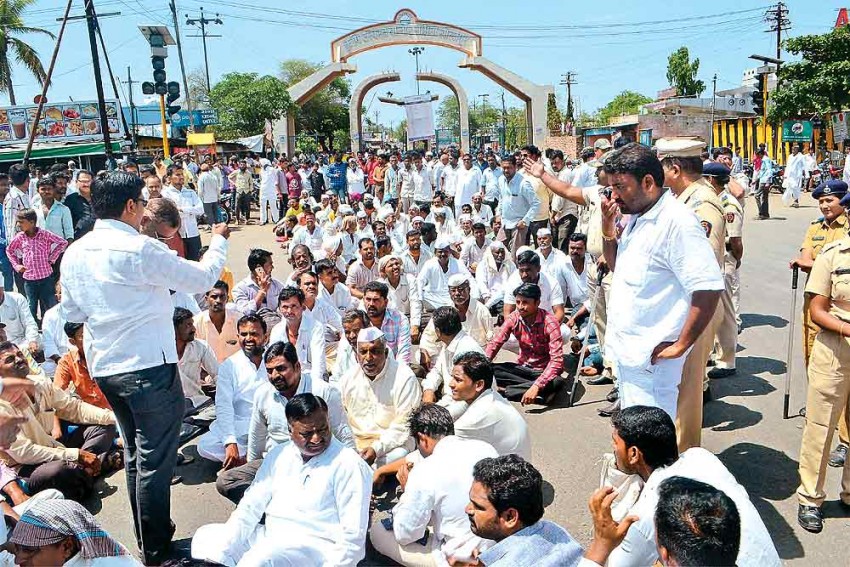 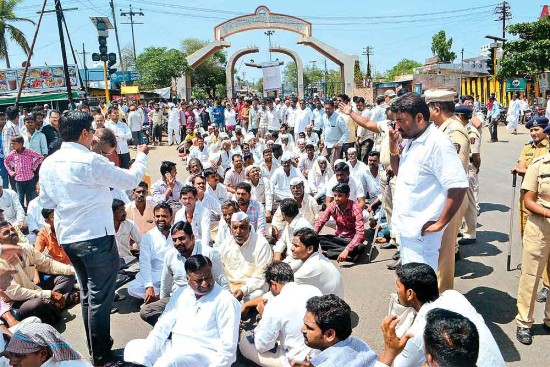 Old farmer: “We should also go on strike.”

Genu: “If a farmer goes on strike, like a worker or trader, then the first casualty will be the farmer himself. The world will end after.”

(From one-act play Aakda, based on ­electricity theft and the plight of farmers)

Following the call for strike by farmers, who also called for blocking the supply of milk and vegetables to Mumbai, the past one week has been hectic for everyone in Maharashtra—for political parties, activists, the state government, retailers, citizens and, especially, protesting farmers.

Since June 1, different market places across Maharashtra remained closed for wholesale transactions for vegetables. On the first day of clashes between protesters and the police, one person lost his life due to a cardiac arrest.

In the neighbouring BJP-ruled state of Madhya Pradesh, the situation has bec­ome much worse. At least five farmers were killed in the violent protests over similar demands from the farmers. Though the trigger for these agitations could lie in the election-sop of loan waiver in Uttar Pradesh, there is little doubt about the worsening situation of farmers after last year’s satisfactory monsoon, the consequent bumper crop and the crashing of prices. The suicide figure of 852 in Maharashtra in the first four months of 2017 is a clear, shocking indication of this.

In Maharashtra, parts of Nashik, from where most of the vegetable supply comes, remain tense. The Mumbai APMC (Agricultural Produce Market Committee) started getting its vegetables from other states and milk supply is coming into the city with police protection. At Puntamba, in Ahmednagar district, where the agitation originated, a decision to start supply of vegetables from June 8 showed the inevitability of an exercise such as this. 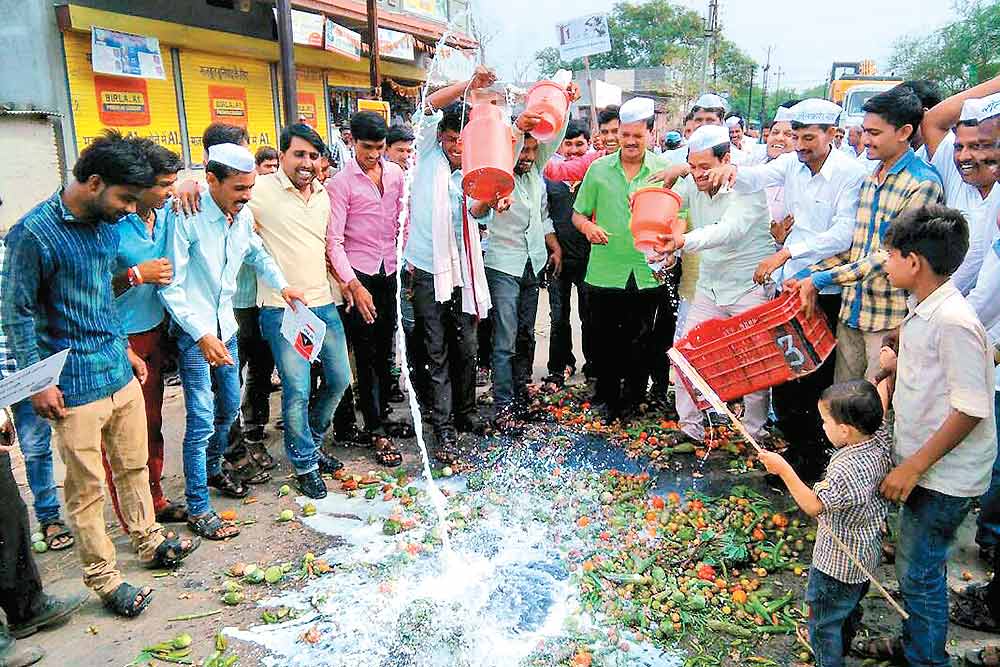 Farmers spill milk on the road during the state-wide protest

The agitation has garnered massive support from farmers across the state. “Even farmers in Vidarbha who do not grow vegetables or do not have the ancillary milk business are supporting,” says senior farmers’ activist Vijay Jawandhia, who, despite his old age, has been relentlessly putting forward the pro-farmer Swaminathan Commission’s recommendations. “Sadly, those who met the chief minister in the middle of the night were not true representatives,” he says referring to the ‘post-midnight’ meeting members of the Kisan Kranti Morcha, an umbrella organisation claiming to represent farmers in Maharashtra, had with CM Devendra Fadnavis on June 4, in which he announced a historic loan waiver of Rs 30,000 crore for small and marginal farmers that was to come into force by October 31. “Even if the government passes the law for punishing private traders who don’t pay MSP (Minimum Support Price), how will they implement it?  They have already tried to create factions by announcing waiver for small farmers, which has historically benefited richer farmers of irrigated western Maharashtra,” adds Jawandhia. After this meeting, the Kisan Kranti members announced that the strike had been called off, but farmers across the state cried foul over this announcement and are carrying on with the agitation.

The All India Kisan Sabha of CPI (M), which is backing the strike, issued a statement in objection to the post-midnight deal struck by the self-appointed delegation with the CM. “What is being offered is different from the demands of loan waiver and MSP. Why was it ­accepted? It seemed as if it was pre-planned,” All India Kisan Sabha leader Ashok Dhawle told Outlook.

Prominent farmers’ leader and MP, Raju Shetti was also being accused of downplaying the agitation in the beginning, but the farmers’ resolve, it appears, has given him a wake-up call. Now he’s speaking vociferously and even writing columns about how farmers have been shortchanged. Shiv Sena’s Uddhav Thackeray has also now proclaimed full support for the farmers in public and in their mouthpiece, Saamna.

Another meeting was held on June 8 between the core committee members of the protesting farmers—of which Shetti was also a part—and the gov­ernment. After day-long discussions, Shetti announced that the farmers had ­rejected the October 31 deadline for the loan waiver. Other core committee members made it clear to the gov­ernment that unless their concerns were addressed, there would be protests on June 12 and Rasta Roko agitation on June 13. Farmers’ leader Raghunath Patil asked the government to waive the entire loan on farmers and issue new loans. Patil also made the bold claim that he would guarantee that there would be no suicides if these demands were met. If they were not met, the leaders claimed that they would block all the functions or events of ministers in the state.

The wave of Maratha morchas that swept across Maharashtra last year also had farmers’ demands on their agenda. This has led observers to fear that the current agitation can soon become caste-influenced.

Since the agitation is so broad based, the demands to resolve the agrarian crisis are also different and conflicting. Amar Habib, who founded Kisanputra Andolan and was a close associate of Sharad Joshi, is clear about his demands: “Rather than announcing a loan waiver and demanding to clear off all debts, we need to repeal the laws that are inherently damaging for the farmers. The loan waiver should be for those farmers whose income comes from farming alone. The demand for the recommendations of the Swaminathan Committee is unrealistic and the CM’s declaration of bringing a law to punish traders who buy produce below MSP, is absolutely ridiculous. It will drive traders out of the state to neighbouring ones and the farmers alone will be the losers.” Another school of thought recommends control on input costs, rather than foc­using on MSP, that will include some profit margin for the farmers. The division is largely between believers of free market economy and welfare state—both have numbers and international case studies and policies to illustrate.

Even as partners in the government, the Swabhimani Shetkari Sanghatana (SSS) and Shiv Sena are supporting the strike. The Congress and NCP are claiming that the strike is an extension of the “Sangharsh Yatra” which the Congress carried out in drought-affected districts demanding loan waivers. “The CM had to change his stance after Modi gave loan waiver in UP. But, in his heart, he is not with it. What does the October 31 deadline mean? Either they expect that the agitation will die down after the monsoon or they will benefit if early polls are dec­lared,” says Prithviraj Chavan, former CM, who handled loan waivers during his tenure along with the irrigation scam, which implicated Ajit Pawar.

While the state government and the BJP as a political party has kept the NCP in check with the dangling sword of scams and investigations, they are finding it tough to rein in Sena. Rumours of preparations for a mid-term poll are rife and on that backdrop, a “historic” loan waiver by October 31, the third anniversary of BJP’s coming to power in the state, may not be ill-timed.

On the other side, the shortage of vegetables and milk has been exploited by the retailers to the hilt. Within two days of the strike, the prices of vegetables had doubled. Within a few days, trucks from other states had arrived at the wholesale markets. Even as perishables force the farmers to sell produce at a throwaway price even in the event of surplus production, traders seem to have procured the supplies from elsewhere and sold at a higher markup anyway. With the help of the Essential Commodities Act and pressure from urban areas, when the prices sky-rocket, past experience suggests that the government can swoop in to push back the protests.

The agitating farmers seem to have understood this and the sowing season is almost here with monsoon set to arrive any moment. “The agitation has to wind up now because we cannot spare even a minute if we have to sow on time,” says Dilip Kolhe, from Kolhapur district. “We will have to rework the strategy and reorganise by October-November again,” he adds. Sambhaji Tangde from Jalna says, “We are not afraid of going without vegetables. A poor farmer is anyway having bhakri with chillies and black tea. We will continue to fight in whichever way possible and get our dues.”

Despite the spirit, which is a welcome change from the collective depression of several years, there is no denying that the economic situation remains complicated. Thankfully, the weather ­bureau’s prediction of 100 per cent rainfall for 2017 has flickered some hope among the farmers.