A Few Turns Of The Screw

Around the time when protests against the killing of Arunachalese student Nido Tania were making it to the front pages of dailies, another piece of news from the Northeastern state went largely unnoticed. It is a development that should have us just as worried as the racist assault on Tania. In an event that accentuates the perilous state of press freedom in Aru­na­chal Pradesh, readers had to do without any papers for five days beginning February 14. The presses resumed rol­ling only when the CM, Nabam Tuki, stepped in and promised to do more to protect the independence of the media.

Trouble began when the deputy commissioner of Capital Complex in Itanagar, Mige Kamki, allowed representatives from the Students Union Movement of Arunachal (SUMA) to protest near the office of The Arunachal Times. The dispute arose after SUMA members expressed unhappiness about not being given enough credit for having worked to have a recent economic blockade that was put in place in Assam against Arunachal Pradesh lifted. This followed clashes in January that left 11 persons dead over an ‘encroachment’ dispute. The Arunachal Press Club, on the other hand, put out a release accusing SUMA members of spreading “highly provocative stories” against the media and “inciting people against the press”.

In a state where institutional mechanisms to protect the freedom of the press are, at best, weak, the state’s acquiescence to a group that has sought to challenge the freedom of the press came as a shock. And with good reason. In July 2012, gun­men shot at the associate editor of The Arunachal Times, Tongam Rina, out­side her office. The brazen attack, which left her seriously injured, has only deepened concerns about the safety of journalists in the state, more so because her assaulters have not been punished yet. 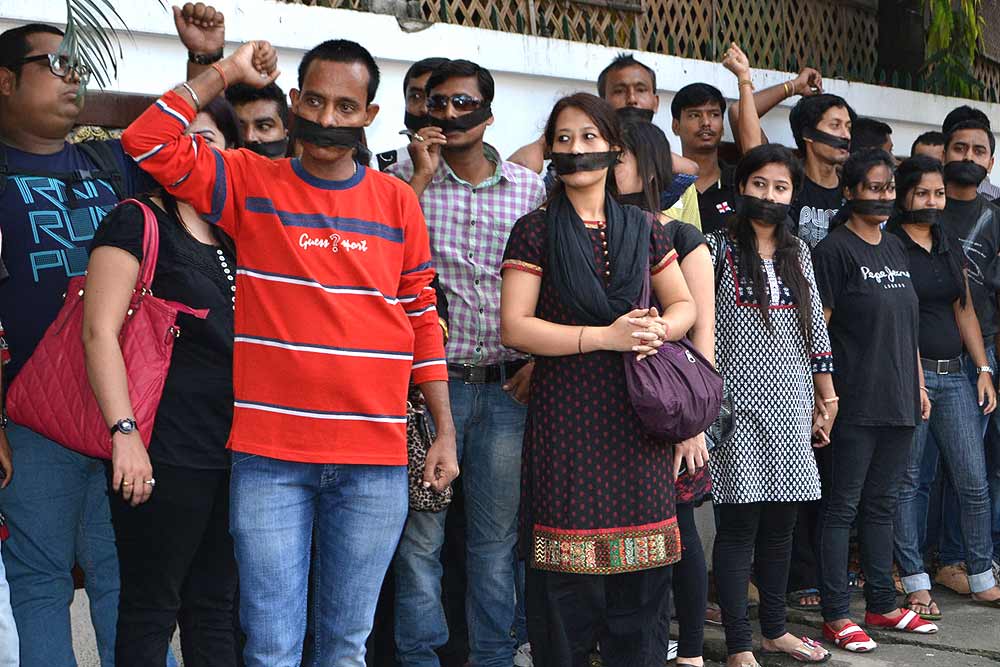 Protesting employees of the closed Prime News in Guwahati. (Photograph by Nava Thakuria)

“Journalists are often under immense pressure from different groups to give them coverage, but protection mechanisms in the state to protect journalists and the work they do are still at a budding stage,” says Mukul Pathak, assistant secretary of the Arunachal Pradesh Union of Working Journalists. Pathak himself was beaten up and his camera damaged in 2011 while covering two warring youth groups. “Justice is rarely done is most cases and we have lost faith in the present system. Mediapersons need a secure environment to do their work,” he adds.

While many concede that controlling threats from insurgent groups may be difficult, they say allowing a students’ body to try and intimidate the media plumbs newer depths. “It is a sad reflection of the state of affairs,” says Suhas Chakma of the Asian Centre for Human Rights. “That student union leaders should be allowed to intimidate the press is a reflection that governance doesn’t exist.” Chakma criticises the Press Council of India for having failed to speak up on issues concerning media freedom. “The chairperson will regularly speak on subjects like death penalty but not on his core mandate,” he adds. PCI chairperson Markandey Katju said he issued a statement on February 19, urging the disputants to come to a resolution. However, it came after a settlement was arrived at on the evening of February 18.

A problem in the region is that it has many news channels, but inadequate sources of ad revenue to sustain them.

But it is not just Arunachal Pradesh where the media has been under siege. There have been several instances in the Northeast in the recent past when press freedom has been curtailed. Often, security personnel have been the aggressors. In February this year, Chaoba Aribam, a senior reporter of the English daily  Imphal Free Press, was beaten up on his way home from work by a Indian Reserve Battalion trooper.  Aribam was hit several times on the forehead with a radio set. The dispute arose after the reporter was asked to explain why he was out on the streets at night. In another incident in March 2007, mediapersons covering an agitation over the alleged rape of an 18-year old girl by an Assam Rifles soldier were detained and thrashed by a group of soldiers. This followed another attack on another Imphal Free Press journalist who was physically ass­aulted by a policeman while on duty just before the  assembly elections that year.

Pradip Phanjoubam, group editor of Imphal Free Press, says he is cognizant of the hurdles the government faces in cracking down on insurgent groups who often attack the media. “The government tried posting security officers in media offices but it proved counterproductive as it kept some of the contacts away,” he says. The solution to this aspect of the problem, most agree, can only come with the resolution of the larger problem of ins­urgency. “But the government can and must act more sternly in cases where security personnel are the perpetrators. So far it has taken token measures against some of them, like suspensions,” he adds.

Recently in Manipur, a similar crisis as the one in Arunachal hit the media in  September 2013 when threats issued by a group unhappy about its statements not being printed forced newspaper distributors to keep off their work and kept newspapers away from stands. As is usual in these parts, an agreement was arrived at eight days later and police deployed at media offices.

The media industry in Assam has also been through a turbulent phase in recent months. First, there was the clo­sure of Seven Sisters Post and Bengali daily Sakalbela, both part of the controversial Sarada group, in April 2013. A few months later in September, Prime News, a news channel owned by the Brahmaputra Infrastructure Priv­ate Limited, announced an abrupt closure and rendered around 170 emp­l­oyees jobless. Aggrieved employees, in a letter to Union information and broadcasting minister Manish Tewari, had alleged that “despite a lot of stories...about the channel being closed down or sold over, the employees were kept in the dark about everything. The management never gave any clear answer to the queries of the employees”. They learnt of the impending closure on September 30, a day before it was actually implemented.

This highlights the peculiar problems of a region where there’s a profusion of news channels but inadequate sources of advertising revenue to sustain them. “There are seven news channels and all of them are free-to-air. They may have fared better if they had expanded their coverage to include news from elsewhere in the region but all of them are just Assam-specific and there’s not enough generation of advertisement revenue,” says Nava Thakuria, secretary of the Journalists Forum of Assam (JFA). The problem for news channels is compounded further by unregulated cable distributors, who often demand “indiscrimnatory” char­ges from channels. “For instance, they will ask for Rs 2 crore as distribution charges from Prime News as it was owned by an infrastructure businessman, but will ask for much less from News Live, which is owned by a politician’s wife,” he adds. The JFA has written to Tewari, asking him to ensure that cable operators apply uniform rates and that their collections are made more transparent.

Caught between the worst of militancy and economic woes, the North­east remains one of the most cha­llenging places for any journalist to work in.