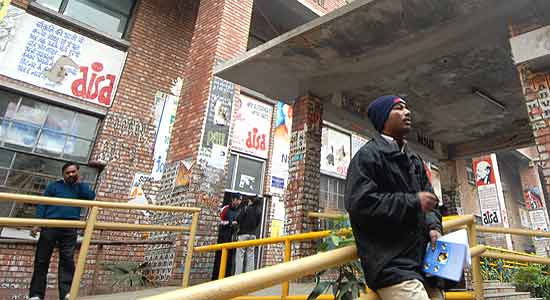 It wasn’t just liberals who were shocked at the fact that 30 professors of the Jawaharlal Nehru University put on paper their dissension on implementing caste quota in faculty appointments. The government too has now sought a clarification on the institution’s stand on the issue. Confirming this, vice-chancellor Prof B.B. Bhattacharya said the university was in the process of furnishing its response to the query. “We have to first get a clarification on whether reservations in the academic faculty is a law; if so, we won’t go against it,” he told Outlook.

“I withdrew my signature after I found that reservations are based on a government order and were passed by executive council in ’07.
Kamal Mitra Chenoy, Group of Comparative Politics

In fact, after the story was put out on these pages a fortnight ago, some of the professors who had earlier affixed their signature on a letter to the V-C opposing reservations have now backtracked. They distanced themselves from the list of anti-reservations signatories after a “brainstorming” on the issue. Among them is Kamal Mitra Chenoy, in charge, Group of Comparative Politics and Political Theory, and part of the 20-member executive council. He communicated his decision to the V-C, saying that his signature was based on incomplete information and wrong assumptions. Chenoy said that he withdrew as soon as it was clarified to him that the Union HRD ministry had in fact mandated reservations through a series of orders in 2007.

Prof Rohan D’Souza of the Centre for Studies in Science Policy and another member of the executive council said he too was withdrawing his signature. “I was informed that the reservations are legally binding,” he said. “I believed that the letter that I had signed was essentially making two points. First, I was told that the UGC’s mandate on reservations for professor and assistant professor positions was not legally binding, and there could therefore be a broader debate in the academic council and the centres.” In effect, he interpreted the letter as merely pressing for a wider discussion, not automatically rubbishing either the idea of reservation or an outright call to reject the structure of reservations proposed by the UGC.

“We’re examining whether there’s a law on reservations. If there is, the university will abide by it. I’ve asked the academic council to view it.”
Prof B.B. Bhattacharya, Vice-Chancellor, JNU

Prof Shivaprakash, dean, School of Biotechnology, whose name also figures in the original list of anti-quota academics, says he hasn’t signed the letter. “As I was abroad, I had communicated that I would take a decision after I returned. I think this was construed as an affirmation. Even an autonomous university cannot be in conflict with the directives of the Constitution. We cannot hold the banner of excellence at the cost of social justice,” he says.

In fact, following the call to re-examine the issue, 50 professors on the other side of the quota debate have written a letter to the V-C making a strong case for social justice. “To state that the reservation policy may have serious implications for long-term academic development of the university raised by some of the faculty is absolutely biased and without any factual data and substantial evidences to scuttle the policy of social justice in their own interest,” the academics have stated.

This group says the reservation policy emanates from the Constitution and is implemented by an executive order of the Government of India. The university being an autonomous institution, all executive orders and government regulations are adopted for implementation through the executive council.

“I was told reservations were not legally binding and withdrew my signature after I found they were legally binding on the university.”
Rohan D’Souza, Centre for Studies in Science Policy

The V-C too finds himself cornered for the comments he made in the last academic council meeting held in November, where he apparently stated that the executive council’s decision to reserve posts in the category of associate professor and professor was an error of judgement. Now, however, he says there was some confusion on whether reservations for sc and sts were based on guidelines from the government. “I’ve also asked the academic council to examine the issue and am seeking the opinion of experts on the legality of the matter,” he said.

It is pertinent to note amid all this that nowhere have the qualifications for teachers been lowered to make room for the reserved category—a bogey the anti-reservations academics often raise to underline their fear that quality is the first casualty of reservations. The minimum requirements of a doctorate and five years of teaching experience with research publications are sought from all candidates, regardless of caste. Also, despite the constitutional obligation, reservations in faculty appointments started only in 1993! And a majority of the professors from SC/ST categories currently on the faculty rolls have come on their own merit, without the benefit of reservation. So, what is the fuss all about? And where is the erosion of quality? In other cases, like that of Prof Y.S. Alone of the School of Arts and Aesthetics, reservations have been a blessing. “Had it not been for reservations,” he says, “I would never have been considered for assistant professor.”

“I was abroad and said I’d sign when I returned. That was taken as a yes. I discussed it with experts and am clear quota applies to all cadres.”
Shivaprakash, Dean, School of Arts & Aesthetics

In a letter to the V-C, which Outlook has accessed, executive council member P. Sainath was scathing in his criticism of the anti-quota professors. He called it a “peculiar marriage of class arrogance and caste animosity”. “Is this an academic trickle-down theory?” he went on to ask. “That the better-off be strengthened so the crumbs trickled down to the weaker sections?”

The enlightened members of the faculty also feel the misguided lot in its midst has forgotten that the university itself had assured the Supreme Court in 2007 that it was obligatory on its part to implement the guidelines of the government’s reservation policy and that it had no alternative but to implement the direction of the central government.

Besides, the letter’s signatories seem to have missed another crucial point: the number of universities (in the central list) currently following reservations in their faculty appointments; 23 out of a total of 27 universities have accepted reservations in the name of social inclusion. Given its premier status, JNU should perhaps have led the way rather than strayed from the path of social justice.

The Claws Of The State